Medindia » Health Information » Diet for Peptic Ulcer (Stomach ulcers) - What to Eat and What Not to Eat?

Diet for Peptic Ulcer (Stomach ulcers) - What to Eat and What Not to Eat?

What are Peptic Ulcers?

Peptic ulcers, also called as stomach ulcers, are characterized by the occurrence of an open sore on the inner lining of the stomach. The sore may be on the proximal, middle or distal part of the stomach or in the duodenum, the initial part of small intestine, following the stomach.

Diseases of the gastro-intestinal tract such as peptic ulcers and dyspepsia are quite common among the urban population today due to improper eating habits and erratic lifestyle adopted due to the influence of technology. People today have chosen jobs involving prolonged hours of sitting in front of the PC and often skipping meals, which is quite common due to busy working hours. 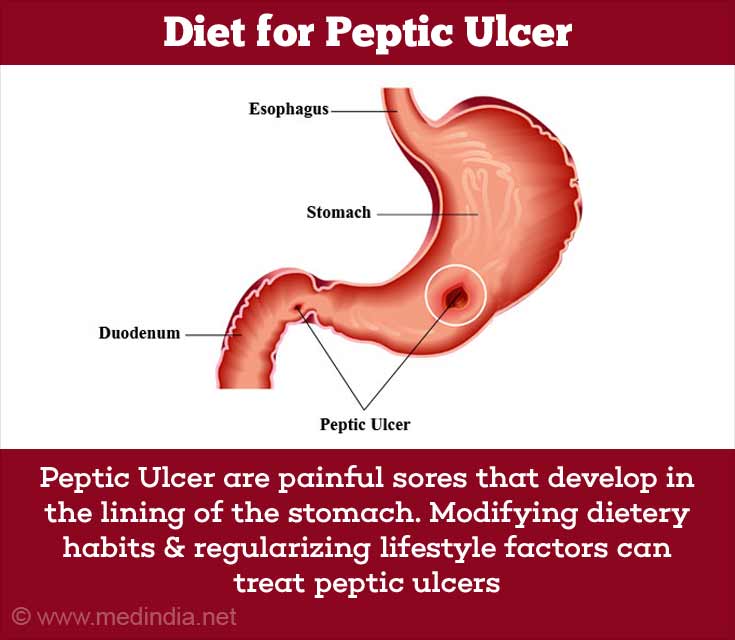 Irregular meal timings combined with having large meals at a time all play a role in disturbing the functioning of the normal digestive system. Paying proper attention to regularizing meal timings & minding the portion size of meals can help reverse gut disorders such as peptic ulcers.

Peptic ulcers have characteristic symptom of dull, continuous, throbbing pain before meal time or sharp, shooting pain experienced while consuming meals or during night. The pain may persist for few minutes to hours, in some cases of severity, it may also prolong for days or months. The pain is most probably centered around the upper abdominal region, close to the sternum.

Other associated symptoms of peptic ulcers may be heartburn, belching, nauseous feeling, bloating, vomiting, and in severe cases, bleeding. Bleeding results when the open sore causes a perforating through the stomach lining. Blood from the ulcers may be observed either in stools or in vomit.

What are the Causes of Peptic Ulcers?

The most common causes of peptic ulcers has been found to be Helicobacter pylori(H.pylori) infection which invade the intestinal lining and damage it while proliferating. Also, indiscriminate use of NSAIDs (Nonsteroidal Anti-Inflammatory drugs such as aspirin and other pain killers) has found to precipitate peptic ulcers.

Alcohol & tobacco intake as well as consumption of oily, spicy foods may worsen the condition of peptic ulcers, but has not been found to cause them. The most common, first line treatment for ulcers is administration of antacids and proton pump inhibitors (PPI) which dilute the concentration of acid secretions in the stomach or reduce the acid production respectively.

The daily diet regime & nutrition do play a significant role in controlling the symptoms & recurrence of peptic ulcers. The main purpose for providing optimum nutrition support is to promote healing of the ulcers as well as to prevent the aggravation of symptoms. Following are the foods which can be included as well as those which needs to be avoided in the diet for effective management of peptic ulcers.

Foods which are well cooked and mashed must be included. Fruits such as apple, pear should be skewed. As the diet should be non-irritating and non-stimulating to the digestive tract, it is advisable to cook vegetables to a well mashed consistency. Whole grains, rice, corn, barley can be included. 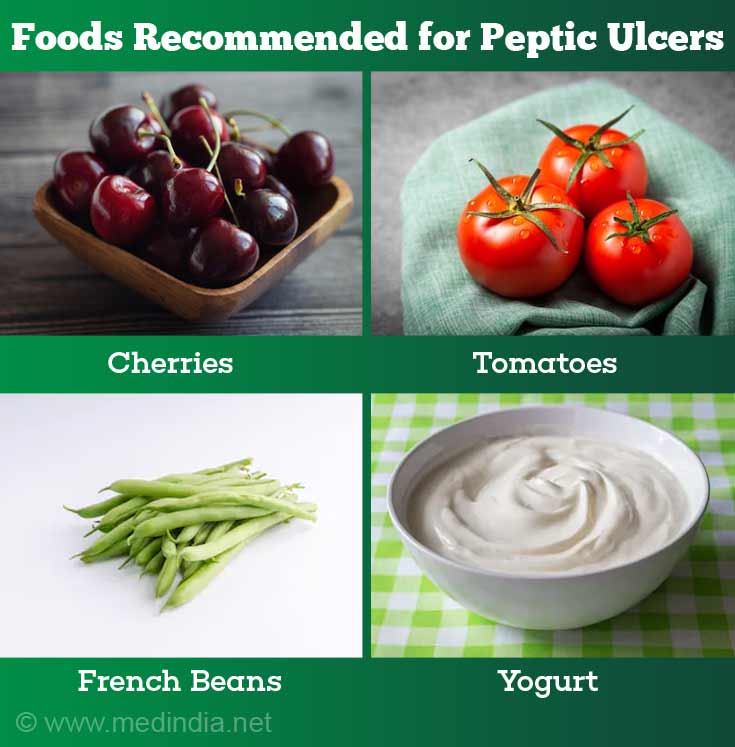 Citrus fruits such as orange, amla (Indian Gooseberry), sweetlime are rich in Vitamin C and helps in wound healing but the question whether it can be used is still a controversy.

Skimmed milk & milk products, low fat cottage cheese are acid- stimulating and so they are restricted.

Zinc is an essential micronutrient which hastens the healing of ulcers. It also improves immunity against H.pylori infection which is one of the causative factors of peptic ulcers. Good immunity resists the bacteria to multiply & damage the lining causing ulcers. Zinc is also found to promote the growth of new cells in the stomach lining. 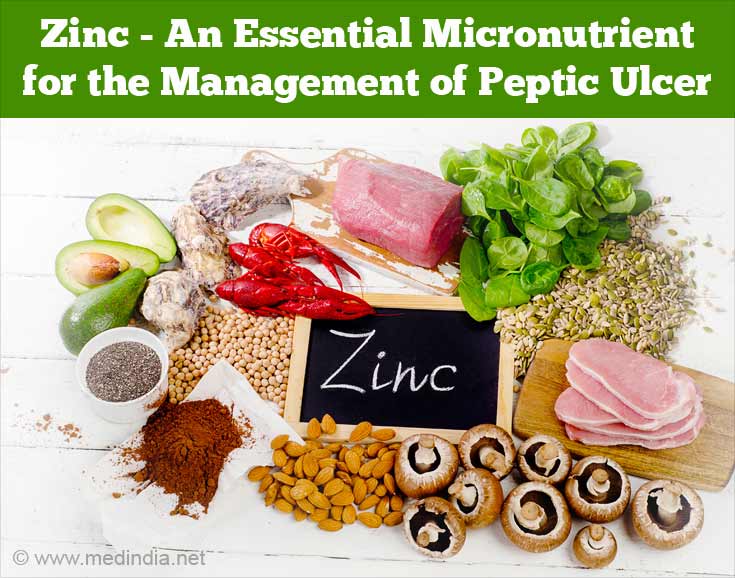 Selenium in conjunction with zinc helps in building immunity to prevent recurrence of as well as heal the ulcers.

Adequate fibre intake, both soluble as well as insoluble fiber, in the diet has found to decrease the risk of occurrence of peptic ulcers. Conversely, inadequate fiber intake through the diet has shown to increase incidence of ulcers. Fibre helps to dilute the bile & gastric secretions which may aggravate the ulcer symptoms, if they are more concentrated in the gut.

Probiotics, which contain healthy strains of lactobacillus bacteria, prevents the growth & proliferation of harmful bacteria like H.pylori, responsible for causing ulcers. They also protect the stomach lining from damage. 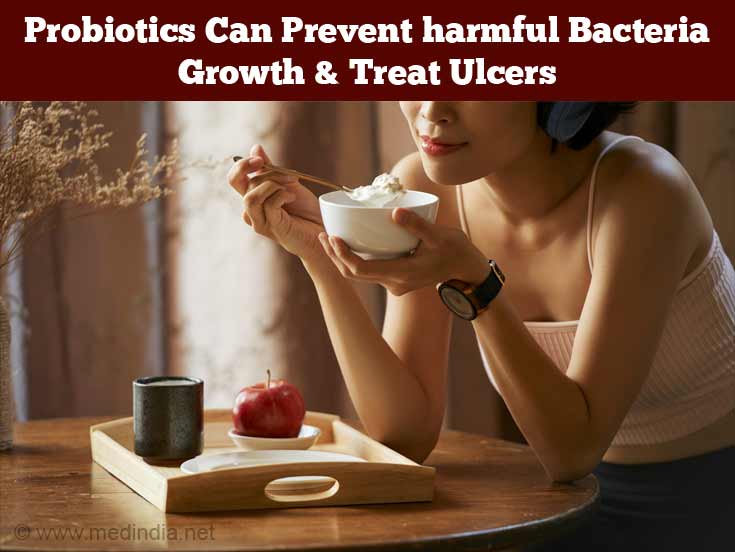 Studies have found Vitamin C to be more effective against bleeding ulcers, i.e, they help to heal the wound faster and stop blood loss.

Adequate intake of fluids in the form of strained vegetable soups, plain water, lime or coconut water, buttermilk helps to accelerate gastric emptying which prevents the concentrated gut contents from staying in the gut for long. They dilute the concentrated gastric secretions.

General Health Tips to Help in Treatment of Peptic Ulcers

Acid Peptic Disease
Acid peptic diseases are a collective disorder affecting millions of people worldwide. A general description about its pathophysiology, symptoms, etiology, complications, diagnosis and treatment is given.

Quiz on Ulcer
A peptic ulcer is a open sore that occurs either in the stomach, in the first part of the small intestine or in the lower esophagus. A peptic ulcer develops due to the effect of excess acid produced in the stomach. It often presents with abdominal ...