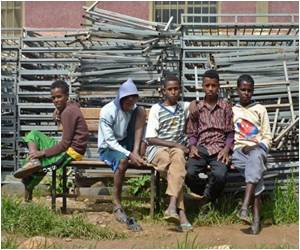 Refugees who fled to the UAE as the conflict in Syria is dragging on, have now recreated a slice of home in the Gulf state.

Amid the gentle bubbling of water pipes and the clack of backgammon pieces, visitors to the Hamidiyeh restaurant reminisce about Damascus in the luxurious Dubai Marina district.

"This place attracts us because it makes us feel as if we are in Damascus," says Waleed Ayoub, a customer.


Like millions of his countrymen, Ayoub has left Syria, where peaceful protests for political change in March 2011 turned into a full-on civil war after a brutal government crackdown on the protesters.
Advertisement
With its mock up of the arched ceiling of Damascus' main old souq, Al-Hamidiyeh is one of many new restaurants and shops in the United Arab Emirates catering to Syrians nostalgic for their homelands.

Branches of the war-torn country's most popular eateries have sprung up around the UAE, which has mostly attracted "refugees" with the means to leave their country and establish themselves in the emirates.

Expensive cars with Damascus plates have become a common sight in the UAE, a destination inaccessible to most refugees due to the high cost of living and the difficulty of obtaining visas.

Unlike the millions who fled to neighbouring countries such as Jordan, Turkey, and Lebanon -- where many are jammed into refugee camps -- Syrians in the UAE enjoy its high standard of living.

Many have even opened businesses.

In Sharjah, signs such as Al-Sham bakery, Damascus Olive, and Al-Zabadani Plain -- a reference to a town near the Syrian capital, parts of which are under opposition control -- line the main road in the emirate.

Among these is the family-run Nabeel Nafisa sweets, an offshoot of one of the most famous patisseries in Damascus.

"With the worsening situation in Syria and the relatively large Syrian community that has formed here, we considered opening a branch in Sharjah,? says branch manager Abdelhadi Nafisa.

Nafisa has shut several branches in Syria, mainly those in the "hotspots on the outskirts" of Damascus, but his shops in the capital remain open.

While Nafisa?s shop in Damascus is famous for the non-stop hustle with customers queueing to try its famous "kunafa" -- a sweet pastry filled with white cheese -- the new outlet in Sharjah is quiet.

Nafisa said obtaining the same ingredients used at home was difficult and some adjustments had to be made to certain recipes.

A few miles (kilometres) away, businessman Anas Mousatat has opened a branch of Tarboush, a popular restaurant in Syria's former business hub Aleppo -- swathes of which have been ruined by heavy fighting between government and rebel forces since summer 2012.

In Tarboush, amid the smell of grilled lamb kebabs Aleppo was famous for and the Levantine dialect spoken by most of its customers, it is difficult to remember that this is Sharjah.

When Mousatat first arrived in the UAE, he did not have business on his mind, he says, but as his enterprise in Aleppo nosedived, he opened the restaurant to earn his keep.

Syrians are unfamiliar with the UAE market and commercial laws, and rising living costs in the Gulf country are another setback, he said.

"More than half of upper-class Syrians who came here have now become middle-class after they spent their savings on failed investments and living costs," he says.

Mousatat, who says he too lost out financially, will "definitely" return to Syria if the situation improves.

But he admits he might keep the Gulf branch of his restaurant open for business.

Syria Refugees Denied Cancer Treatment: UNHCR
Syrian war victims and other refugees with cancer are denied the care they need due to lack of ......

Hosts of Iraqi, Syrian Refugees may Face Steep Medical Costs
A new study has found how Middle-Eastern countries that host refugees from Iraq and Syria may have ....