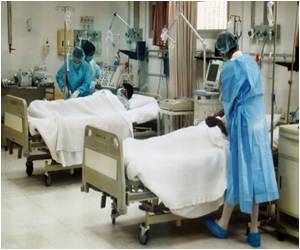 Patients discharged from acute care hospitals with low scores on a standard test that measures how well they perform everyday activities as moving from a bed to a chair are far more likely to need readmission to a hospital within 30 days than those who score better.

This is according to new Johns Hopkins research. "The Functional Independence Measure score is a direct reflection of a patient's ability to heal," says Erik Hoyer, M.D., an assistant professor in the Department of Physical Medicine and Rehabilitation at the Johns Hopkins University School of Medicine and the department's deputy director of quality and safety. "When a person cannot move his or her legs or use the bathroom independently, for example, it's telling us something about the body's physiologic reserve, its overall ability to be resilient to disease."

A report on Hoyer's research is published in the May issue of the Journal of Hospital Medicine.


Though many researchers have examined factors that may contribute to increased risk of rapid readmission, Hoyer says, none to his knowledge have focused on an overall standard measure of how well patients perform activities necessary for everyday living. One reason may be because few hospitals require inpatients' function to be assessed in a standardized way, but with new Medicare reimbursement guidelines in place that cut hospital reimbursements when patients are readmitted within 30 days of discharge, that might drive interest in using similar assessments on patients in general.
Advertisement
Hoyer explains that all inpatient physical rehab facilities in the United States already require use of the standard Functional Independence Measure (FIM) to assess inpatients' physical capacity for a wide range of tasks, including the ability to transfer themselves between a chair and a wheelchair, the toilet or the shower; to walk, eat, bathe and dress on their own; and to effectively communicate, socially interact, solve problems and remember important information.

The FIM must be conducted within 72 hours of admission to a rehab facility, and the scores are reported to state and national agencies.

Taking advantage of this reporting requirement, Hoyer and his colleagues used various databases to pull information on 9,405 patients admitted to an inpatient rehab facility directly from an acute care hospital between July 2006 and December 2012. The data included general demographic information from each patient, such as age, gender and race/ethnicity, as well as primary diagnosis upon discharge from the hospital, the severity of illness, FIM scores upon admission to rehab and whether he or she was readmitted to an acute care hospital within 30 days of entering rehab.

Further investigation showed that out of the three general categories of illness that people enter rehab to treat  medical (such as congestive heart failure), neurological (such as stroke) and orthopedic (such as hip replacement)  those with medical diagnoses were the most likely to head back to the hospital within a month.

Medical diagnoses often include health problems that affect many organs at the same time, unlike neurological or orthopedic diagnoses, which affect more localized parts of the body.

Hoyer notes that getting patients more mobile and functional during their stay used to be a standard part of hospital care, and probably should be again, but because nurses and other caregivers have more and more to do in the acute care setting, that will be a challenge.

"Helping patients become more functional before they leave the hospital is important not just for Medicare policy, but also for patients' overall hospital experience and quality of life when they leave," he says. "When you talk about whether someone can use a bedpan or the toilet, it's a question of dignity."

New Approach for Surgery Cuts Hospital Readmission Rates
Changes in managing patients before, during and after colorectal surgery cut hospital stays by two ....