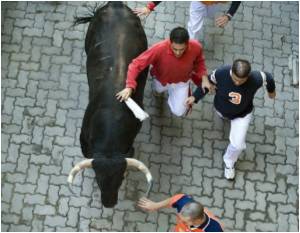 Likened to a weather forecast crossed with a church hymn, Switzerland's national anthem could be binned in favour of a new version if campaigners get their way.

Too heavy on God and Alpine vistas, the anthem fails to reflect today's values and has never been etched into the national psyche, critics say.

"Nobody knows the words! Anyone who tells you they do is a liar. Or else we manage the first few and afterwards we go 'la, la, la'," said Pierre Kohler, president of the jury holding an unofficial competition to choose a new anthem.


Ditching anthems is usually associated with wars and revolutions -- think France's "Marseillaise" -- none of which applies to peaceful, stable Switzerland.
Advertisement
But on January 1, organisers kick off a contest to find a new anthem, open to all and with a first prize of 10,000 Swiss francs ($11,000, 8,000 euros).

"Personally, I think a national anthem can be changed every 50 or 100 years. It's not a major problem. On the contrary, it allows people to think," Kohler told AFP.

The goal is to submit a text to the government by 2016, potentially paving the way for a referendum in this nation of eight million people, renowned for its direct democracy.

The current anthem, officially called the "Swiss Psalm", was penned in 1841, setting a poem on piety and Alpine climes to music composed by a priest.

"You've got rolling thunder, radiant mountains. It's a mix between a weather report and a psalm. That might have been right for its century," said fellow jury president Oscar Knapp.

It was written in Switzerland's majority German, with versions reflecting cultural difference later crafted in the three other official languages, French, Italian, and Rumantsch -- a Romance language spoken by several thousand Swiss including Knapp.

The modern Swiss confederation was founded in 1848 and with power centred in its cantons -- similar to US states -- long managed without a formal anthem.

Its de facto song was "When you call us, Fatherland", written in 1811.

But that shared a tune with Britain's "God Save the Queen", a tune once common in many countries and still used by Switzerland's tiny neighbour Liechtenstein.

"Swiss Psalm" supporters pushed from the late 19th century to make it the official anthem and end confusion with Britain's, but decision-making here can move at snail's pace to build consensus.

In 1961 the government declared it the provisional anthem, before giving it official status in 1981.

The problem, opponents argue, is that it was outdated even five decades ago, given Switzerland's increasingly secular society.

"We don't take issue with the tune, which is quite beautiful," said Jean-Daniel Gerber, chairman of the Swiss Society for Public Good, the 203-year-old association which masterminded the competition.

"The problem is the lyrics. The author had in mind a psalm, not a national anthem. As a psalm, you have to admit that it's very good. We have no qualms with it as a psalm, just as an anthem," he added.

Supporters of the "Swiss Psalm" are unhappy.

"In my view, Switzerland has a very beautiful anthem, which is well-recognised internationally," said Hubert Spoerri of the fan website.

"I'm saddened that a group of Swiss wants to change this beautiful anthem. No one else has done this, even countries with much 'worse' lyrics," he told AFP.

Historian Claude Bonard said the idea was wrongheaded: "Our anthem may not be great. It's of its time, and times have changed. But change for change's sake?

"After all, in France, 'impure blood' no longer 'waters the fields', but the Marseillaise is still the Marseillaise," he told AFP, quoting the anthem born in the 18th century during the French Revolutionary Wars.

Public views on the project are mixed.

"It's a bit old-fashioned, but it's about Switzerland, so that's okay. And it's kind of melancholic, which fits our national character," said Bruno Ebenter, 39.

"Tradition is tradition," said Paul Mueller, 46, while Stephan Kolly, 50, disagreed, dubbing the anthem "much too old".

And Nadia Mauchli, 31, said the whole debate was "typically Swiss", because "we always want to improve things."

The jury includes establishment figures -- Kohler is a former cantonal government chief, and Knapp an ex-ambassador -- as well as musicians, journalists and representatives of choirs, yodel clubs and sports associations.

Entries must be submitted by June 30, in at least one of the four languages, with the organisers handling subsequent translation.

The competition rules say the current tune should be respected, albeit with room for artistic license.

Entries must also draw on the preamble to Switzerland's updated constitution, approved by the public in a 1999 referendum.

"It refers to values such as freedom, democracy, solidarity, openness to the world, responsibility towards future generations, that the community's strength is measured by the wellbeing of its weakest members. It's a wonderful text," said Lukas Niederberger, director of the Swiss Society for Public Good.

Addressing pro-religion criticism, he underlined that the preamble begins with "In the name of Almighty God".

37 Pc Brits Don't Know First Line of National Anthem: Poll
According to a poll, more than a third of British people don't know the first line of their ......