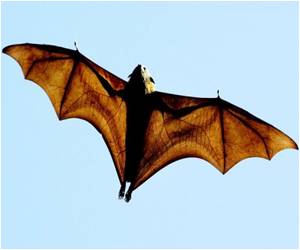 A new study conducted on bats has highlighted the capability of their wings to fine tune their flight.

Bats employ a network of nearly hair-thin muscles embedded in the membrane of their inherently floppy wing skin to adjust the wings' stiffness and curvature while they fly, Brown University researchers report.

Birds and insects have stiff wings, but the new evidence suggests bats have evolved this muscular means of preserving or adjusting wing shape.


Brown biology graduate student Jorn Cheney said aerodynamic performance depends upon wing shape, asserting that the shape of a membrane wing might initially begin flat but as soon as it starts producing lift it's not going to remain flat because it has to deform in response to that aerodynamic load.
Advertisement
Cheney said that the shape it adopts could be a terrible one - it could make the animal crash - or it could be beneficial, adding but they are not locked into that shape. Because bats have these muscles in their wings, and also bones that can control the general shape as well, they can adopt any number of profiles.

For his study, Cheney attached electrode sensors to a few muscles on the wings of a few Jamaican fruit bats and filmed them as they flew in the lab's wind tunnel.

Three key findings emerged from the data. They all point to the plagiopatagiales modulating skin stiffness.

One result was that the muscle activation and relaxation follows a distinct pattern during flight: They tense on the downstroke and relax on the upstroke.

Wing surface changes during flightArea of detail shows plagiopatagiales, tiny muscles that work together to stiffen or reshape an area of the bat's wing during the wingbeat cycle.

Another finding was that the muscles don't act individually. Instead they exert their force in synchrony, providing enough collective strength to stiffen the wing.

Finally, Cheney found, the muscles appeared to activate with different timing at different flight speeds. As the bats flew faster, they tensed the muscles sooner in the upstroke-downstroke cycle.

The paper has been published in the journal Bioinspiration and Biomimetics.