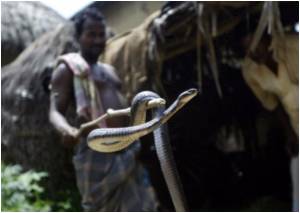 Snake venom, according to Japanese scientists who were studying the body's reactions to toxins, could hold potential cure for heart disease and cancer.

The researchers claimed that inhibiting a protein found on the surface of blood cells known as platelets may combat both irregular blood clotting and the spread of certain cancers throughout the body.

Snake Venom may Provide Insight and Improve Understanding of Diseases

Snake venom contains a protein that has the potential for new drug discovery and to advance understanding of disease mechanisms, according to researchers.
Advertisement

"The finding that platelets not only play a role in blood clotting but also in the development of vessels that allow tumors to flourish was quite unexpected and paves the way for new research on the role or roles of platelets," said Katsue Suzuki-Inoue, the associate professor at the University of Yamanashi.


"When a blood clot, or thrombus, forms during the body's normal repair process, it's doing its job. But, thrombotic diseases, such as heart attack and stroke, are leading causes of death in developed countries. Understanding and manipulating the underlying chemical reactions could help us save many lives," said Suzuki-Inoue.

Snake venom facial, anyone? The idea might look bizarre. But the Botox-like effect the venom is supposed to have is increasingly gaining acceptance.
Advertisement
"Snake venom contains a vast number of toxins that target proteins in platelets. Some of those toxins prevent platelets from clotting, which can lead to profuse bleeding in snake bite victims. Others, like the one we've focused this research on, potently activate platelets, which results in blood clots. Identification of the molecular targets of many of these toxins has made an enormous contribution to our understanding of platelet activation and related diseases," said Yonchol Shin, an associate professor at Kogakuin University who specializes in snake toxins.

Intrigued by the then-recent discovery that elements in snake venom can promote irregular aggregation of platelets - the kind that leads to clots and stroke - the researchers set out in 1997 to understand better the molecular underpinnings of those chemical reactions.

In 2000, another set of investigators came across a protein on the surface of platelets and dubbed it C-type lectin-like receptor 2, or CLEC-2.

After six years of research and collaborations with British investigators, the team in 2006 discovered how rhodocytin-a molecule purified from the venom of the Southeast Asia pit viper Calloselasma rhodastoma-binds to the CLEC-2 receptor protein on the platelet surface, spurring the platelet to clot with others like it.

Then, in 2007, the researchers reported how a separate molecule, called podoplanin, binds to the CLEC-2 platelet receptor protein very much like the venom molecule does.

Using a mouse model, the team in 2008 showed that blocking the tumour protein podoplanin from binding with the platelet receptor protein CLEC-2 could prevent tumours from metastasizing to the lung.

The recent investigations hinged on the generation and study of genetically engineered mouse embryos that lacked the platelet receptor protein CLEC-2.

In the end, the experiments showed that CLEC-2 is not only necessary for blood clotting but also necessary for the development of a different type of vessel, specifically lymphatic vessels that carry fluid away from tissues and prevent swelling, or edema.

Podoplanin is also expressed on the surface of certain types of lymphatic cells and is known to play a role in the development of lymphatic vessels, explained Hirashima.

"We speculate that the interaction between the platelet's CLEC-2 protein and the podoplanin molecule in lymphatic cells plays an essential role in the creation of lymphatic vessels, thereby facilitating tumour growth. If this is the case, a drug that blocks that interaction would prevent the spread of tumours through lymphatic vessels," said Osamu Inoue, an assistant professor at the University of Yamanashi.

The study has been published in the Journal of Biological Chemistry.

Turmeric Powder - Health Benefits, Uses & Side Effects Calculate Ideal Weight for Infants Iron Intake Calculator Pregnancy Confirmation Calculator Blood - Sugar Chart Sanatogen Find a Doctor Find a Hospital The Essence of Yoga Selfie Addiction Calculator
This site uses cookies to deliver our services.By using our site, you acknowledge that you have read and understand our Cookie Policy, Privacy Policy, and our Terms of Use  Ok, Got it. Close
×