Protein That Enhances Efficacy of Vaccines 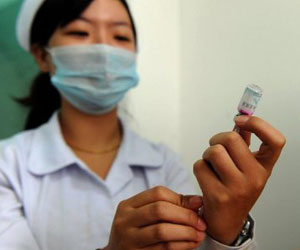 Scientists have discovered a protein that could help make vaccinations more effective and also provide protection from other diseases such as cancer.

The researchers purified a protein found on the exterior of bacteria (neisseria meningidis) and used it as an accessory to provide a better vaccination response.

Increasing influenza vaccination can reduce the spread of influenza in the workplace. This is especially important for healthcare personnel.
Advertisement
‘The protein, called PorB, can help make vaccinations more effective and also provide protection from other diseases such as cancer.’

Typically, vaccines can either increase the amount of antibody production or they can stimulate cells (called cytotoxic T cells) to directly kill the offending agent.


The protein, called PorB, is unique in that it can do both, the researchers said.

The study, published online in the journal Scientific Reports, may lead to greater understanding of how vaccine enhancers work and can best be used.

A Little Nudge may Provide Boost to Flu Vaccination Rates

Penn study shows a simple behavioral economics technique aimed at prompting doctors to order vaccinations could prevent millions of flu cases annually.
Advertisement
"This study has wide implications as it could not only be used to help the body identify and fight off bacterial infections, but it could also potentially help the body use its own machinery to fight off other diseases like cancer, HIV, and influenza before they have a chance to establish within the body," explained corresponding author Lee Wetzler, Professor of Medicine and Microbiology at Boston University School of Medicine (BUSM) in the US.

The model that received the PorB had an increase in the response to the vaccine antigen, evidenced by an increased number of activated cells in the lymph nodes and a gain in the production of cytotoxic T cells, as compared to the vaccination with the antigen alone.

"The antigen formulation with PorB triggers a sequence of cellular events at the periphery and in lymphoid tissue that are critical for the establishment of protection to a broad array of infectious diseases, and maybe for other diseases like cancer," Wetzler added.

Rotavirus diarrhea is responsible for nearly one lakh deaths, 32-35 lakh out-patient visits and nearly eight to 10 lakh hospitalizations every year.
Advertisement
<< A Gene Called CRY1 may Explain Why You are a Night Owl
Working on Narendra Modi's Vision of a TB-Free India >>

More News on:
Magical Millets for Your Health Vaccination for Children Diet and Nutrition Tips for Athletes Nutrition IQ