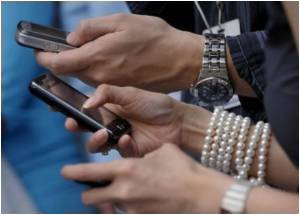 Overuse of cell phones to send mails and texts has lead to a new malady known as "BlackBerry thumb" due to repetitive strain injury.

The condition is so common that one law firm believes employers can expect a series of lawsuits from staff claiming compensation.

That modern gadgets have changed the world, is a gross understatement. Yet, rising from the din is an ever increasing evidence, braced by scientific work, of the ill-health effects of modern gadgets.
Advertisement

"If no one knows about the risks involved, they won't sue, but more and more people are becoming aware of health hazards in the workplace," the Telegraph quoted Karen Jackson, a co-founder of the solicitors Roberts Jackson, of Wilmslow, Cheshire, as saying.


""BlackBerry thumb' is the overuse of a mobile phone for work purposes and we envisage potential work in this area as more people are using their handsets when they're on the move, which is leading to repetitive strain injury.

"A lot of people displaying symptoms associated with repetitive strain injury do not realise they are work-related, but the number with symptoms is increasing."

Carpal tunnel syndrome (CTS) is a condition caused by increased pressure on the median nerve at the level of wrist.

BlackBerry in Your Pocket Could Have Harmful Health Effects