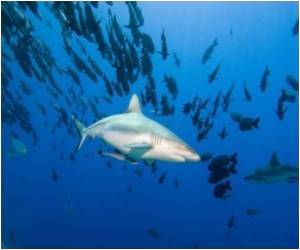 This is according to a study published August 6, 2014 in the open-access journal PLOS ONE by Julien M. Claes, postdoctoral researcher from the FNRS at Université catholique de Louvain (Belgium), and colleagues. This adaptation is one of many these sharks use to produce and perceive bioluminescent light in order to communicate, find prey, and camouflage themselves against predators.

The mesopelagic twilight zone, or about 200-1000 meters deep in the sea, is a vast, dim habitat, where, with increasing depth, sunlight is progressively replaced by point-like bioluminescent emissions. To better understand strategies used by bioluminescent predators inhabiting this region that help optimize photon capture, the authors of this study analyzed the eye shape, structure, and retinal cell mapping in the visual systems of five deep-sea bioluminescent sharks, including four Lanternsharks (Etmopteridae) and one kitefin shark (Dalatiidae).


The researchers found that the sharks' eyes contained a translucent area present in the upper eye orbit of the lantern sharks, which might aid in adjusting counter-illumination, or in using bioluminescence to camouflage the fish. They also found several ocular specializations, such as a gap between the lens and iris that allows extra light to the retina, which was previously unknown in sharks. Comparisons with previous data on non-bioluminescent sharks reveals that bioluminescent sharks possess higher rod densities in their eyes, which might provide them with improved temporal resolution, particularly useful for bioluminescent communication during social interactions.
Advertisement
"Every bioluminescent signal needs to reach a target photoreceptor to be ecologically efficient. Here, we clearly found evidence that the visual system of bioluminescent sharks has co-evolved with their light-producing capability, even though more work is needed to understand the full story," said Dr. Claes.

These results reveal an unexpected diversity of photon capture strategies and indicate that like other deep-sea animals, deep-sea sharks possess a number of adaptations to cope with the twilight zone.

Research Finds White Sharks Remarkably Similar to Humans
Many of the endangered great white shark's proteins involved in an array of different functions- ......

Pink Reveals Her Fear for Sharks and Spiders
Pop singer Pink has revealed that she is scared of sharks and spiders....