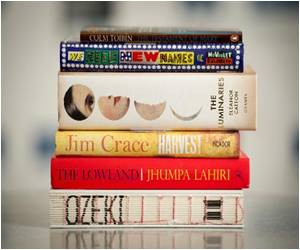 NoViolet Bulawayo from Zimbabwe could make history if he won the Booker Prize award, but Jim Crace fears that the contest will have lost its character next year.

Bulawayo is the first black African woman to be shortlisted for the Booker, for "We Need New Names", the tale of a 10-year-old girl who escapes poverty at home only to find new problems in the United States.

But Crace is among several authors who fear the organisers' decision to admit US writers and those from any other part of the world from next year will degrade the prestigious contest.


While the novel must be an original work in English, the Booker is currently restricted to writers from the Commonwealth and former members Zimbabwe and Ireland.
Advertisement
"For me the great thing about the Booker Prize is that up to now it's been a Commonwealth prize reminding us about shared history," Britain's Crace told an audience at a literary festival this week.

"Not always happy shared history, but there is a solidarity and cousinship between us, England and Ireland... Zimbabwe, New Zealand, Canada, India, and all of those countries that make up the Commonwealth."

"That's my fear, I am worried about losing that. My hopes are that it will be a triumphant success."

Julian Barnes, another Briton who won the Booker in 2011 for "The Sense of an Ending", also expressed concern about the change.

"I think that prizes thrive on having some restriction to them," he told BBC radio.

Barnes added: "There's a certain cultural cringe in this country to the big American books and I fear that British writers will win it much less often."

"And often the Booker gives a platform to young writers and encourages them, and that, I think, is much less likely to happen."

However, others note the inclusion on the shortlist of Ruth Ozeki, a Japanese-American who lives in Canada, suggesting the existing qualifications are already being stretched.

Another shortlisted author, Indian-American Jhumpa Lahiri, sits on US President Barack Obama's committee on the arts and humanities, and in 2000 won a Pulitzer prize.

"Personally, I think the prize ought to be open to American writers rather than extended in this piecemeal way," wrote novelist and critic Philip Hensher in the Spectator magazine.

But many will be hoping for victory for Bulawayo, real name Elizabeth Zandile Tshele, who is also be the first Zimbabwean to be shortlisted.

"I feel there are so many deserving black women who came before me. So I feel very lucky and honoured, especially as this is my first novel," she told AFP after her nomination last month.

Bulawayo would be the fourth African winner if she triumphs at the ceremony in London's Guildhall, after South Africans J.M. Coetzee (1983 and 1999) and Nadine Gordimer (1974) and Nigerian-born Ben Okri (1991).

Irish writer Colm Toibin is also in the running this year for "The Testament of Mary", the story of a woman trying to piece together the events that led to the death of her son.

Lahiri is nominated for "The Lowland", about two brothers growing up in Kolkata in India, while Ozeki's "A Tale for the Time Being" is a sweep through the history of a Japanese family.

Eleanor Catton, the youngest nominee at 28, was chosen for "The Luminaries", about the goldrush in 1860s New Zealand.

The Booker's expansion comes ahead of the start in March of a rival award -- the Folio Prize -- which also honours English language fiction published in the UK. It has a £40,000 prize.

Booker Prize Winner Warns That E-Books Threaten Livelihoods Of Aspiring Writers
A Booker Prize winning author has claimed that e-books are threatening the future of English ......

Kuwaiti Wins Arab Booker for Novel on Migrant Workers
Saud al-Sanaussi, a Kuwaiti writer won the Arab version of the Man Booker Prize for his novel....