The cause of nasal discharge can be identified based on the type of discharge.

The inner lining of the nose consists of mucus membrane that contains mucus-secreting glands. Mucus is a thin secretion made up of water, antibodies and proteins. The mucus helps to keep the nasal passages moist and prevent dust or infective particles suspended in the air from reaching the lungs. In some conditions, the mucus production increases and manifests in the form of a running nose. Inflammation of the nasal mucosa is referred to as rhinitis. The excess mucus may drip down the throat, resulting in irritation and frequent clearing of throat. This condition is referred to as postnasal drip. The excess mucus can also block the eustachian tube which connects the nose with the ear resulting in ear infection and pain.

The cause of nasal discharge can often be identified by examining the patient. The type of discharge gives a clue to the underlying cause. For example -

Various causes of nasal discharge are listed below:

Allergic Rhinitis: Allergic rhinitis is a condition characterized by nasal itching, swelling and watery discharge. It is also accompanied by other symptoms like itching and watering of eyes with swelling of eyelids, sneezing and rash with itching. Some patients may show the presence of additional symptoms like cough, wheezing and the presence of nasal polyps. The patients usually have other people in the family suffering from the same condition. Symptoms may be seasonal i.e. appear when the person is exposed to pollen in spring and summer months, or perennial, i.e., caused by substances that the patient is exposed to all year around like dust mites and cockroach debris.

Vasomotor Rhinitis: Vasomotor rhinitis is a non-allergic, non-infective type of rhinitis in which the patient, often an elderly, suffers from clear watery discharge. The discharge may be stimulated by conditions like warm or cold air, odors, scents, light or particulate matter. 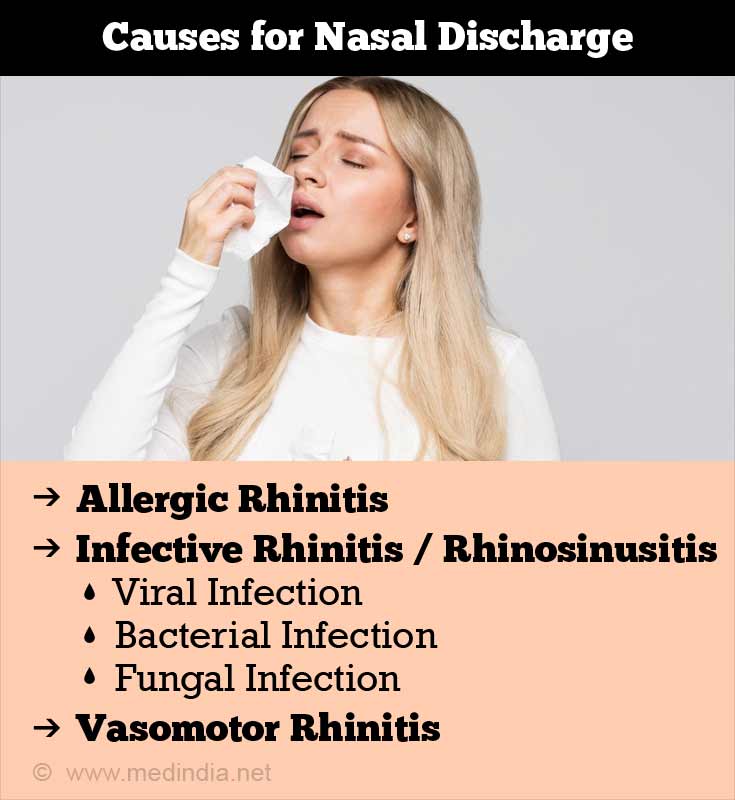 Foreign Body in Nasal Passage: A foreign body stuck in the nasal passage causes unilateral and foul smelling nasal discharge. The presence of a foreign body should especially be suspected in children with such symptoms.

CSF Rhinorrhea: A head injury could lead to a fracture in the skull and result in the leakage of fluid surrounding the brain (called the cerebrospinal fluid) through the nose. Thus, presence of a clear nasal discharge following a head injury should be treated as an emergency. 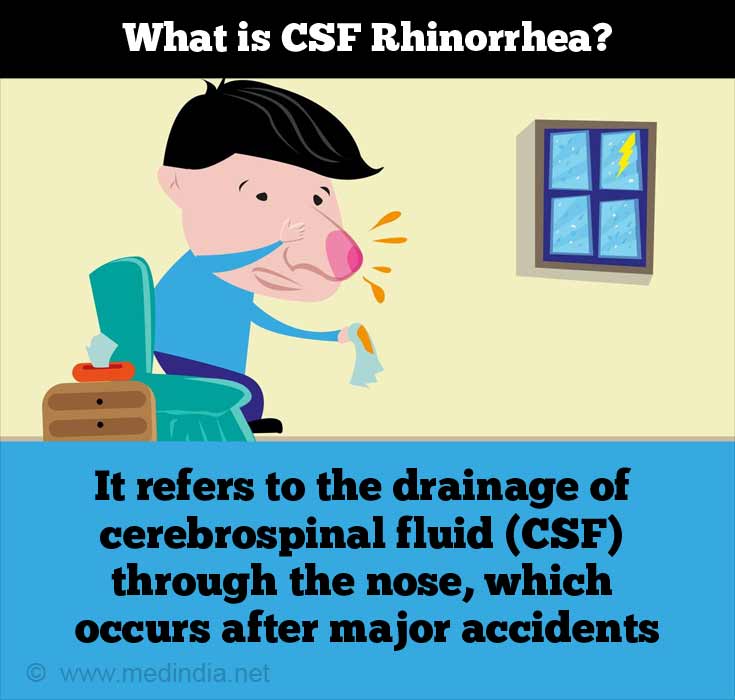 Hormonal Changes: Changes in the hormone levels due to pregnancy, oral contraceptives, menstruation and hypothyroidism result in increased congestion and watering of the nose.

Emotional States: Nasal discharge that accompanies crying is due to passage of the tears through a small opening on the inner side of the eyelid into the nose. 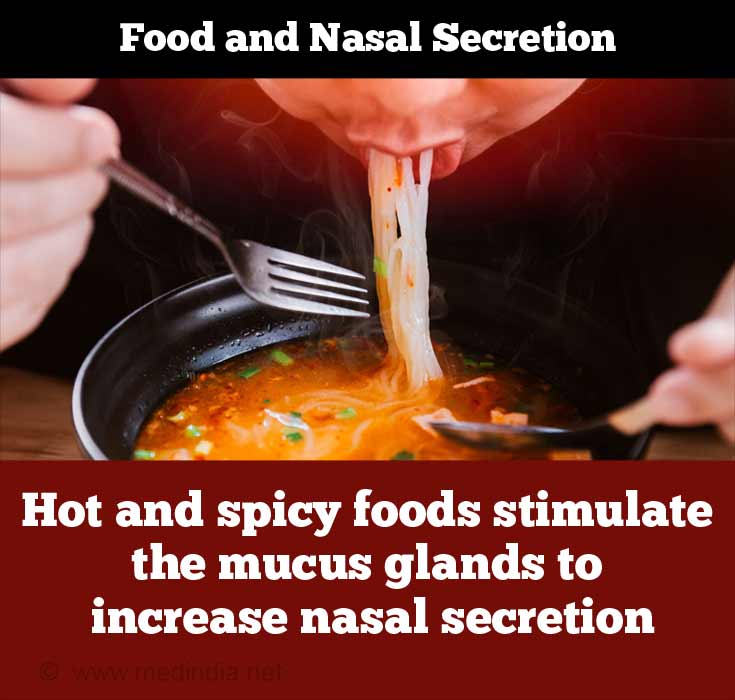 I've had at least 10 surgeries removing cysts from my sinuses. I've been told i have sinusitus and and will just have to deal with it and do the irrigations forever pretty much. I have been surgery free for 3 years now! But now I'm having this terrible issue with every time i bend over or tilt my head to the side or down like chin to my chest, this clear with a hint of yellow liquid, NOT MUCAS, comes pouring out my nose. Its my right side I'm having the problem with. I'm experienceing a lot of pain on that side as well. I remember with the surgeries on of the risks was some kind of spinal leak.... but that was years ago??? I haven't suffered any traumatic head injuries but have hit my head on a few things and have had NUMEROUS steroid injections in the cervical spine and trigger point injection in the muscles in theback of my head. My ENT can't get me in for a bit and I'm scared this may be seriou since it hasn't stopped and its been 24hrs. please tell me what i should do.... and my ER won't help because my sinuses are tooo complicated they will only treat the pain and refer me to see my ENT.

Yes, but if you're a adult, this could be a sinus problem and you should contact a sinus specialist kuna to help treat it. This page was a good read by the way!

hello sir, iam suffer from nasal discharge but remain in my nose in case of sneathing will come out. and suffer from slight pain in my noise slightly headeche, and sensitive to alla smell or oder even smell of creams soaps, detergents, coocks plz help me in diagnosing my case thnax alt

Allergic Rhinitis During Spring
Allergic rhinitis, characterized by coughing, sneezing , watery eyes and even breathing difficulties , is quite common during this season.

Anosmia
Anosmia is the inability to perceive smell. Most patients with anosmia complain of losing the sense of taste (ageusia) and of not enjoying food.

Antibiotics Not The Solution For Viral Sinus Infections
New Guidelines issued by the IDSA have warned against prescribing antibiotics for sinus as most of the infections are caused by viruses.

Nasal Polyp
A nasal polyp is a non-cancerous outpouching of the mucous membrane of the paranasal sinus into the nasal cavity, it occur when the mucus membrane from the sinuses protrude into the nose through the sinus openings.

Post-Nasal Drip
Post-nasal drip occurs as dripping of the excessive mucus from the nasal mucosa caused by allergy or infection. Post-nasal drip can cause bad breath and snoring.

Adenoidectomy
Adenoidectomy is a surgery which involves removal of the adenoid gland, a mass of lymphoid tissue located at the back of the nose.
Sign up for Wellness Consult a Doctor Sign up for Selfcare
Advertisement
Health Topics A - Z
A B C D E F G H I J K L M N O P Q R S T U V W X Y Z

Iron Intake Calculator Diaphragmatic Hernia Find a Hospital Drug - Food Interactions Vent Forte (Theophylline) Sanatogen The Essence of Yoga Blood Pressure Calculator Find a Doctor Indian Medical Journals
This site uses cookies to deliver our services.By using our site, you acknowledge that you have read and understand our Cookie Policy, Privacy Policy, and our Terms of Use  Ok, Got it. Close