requires immediate medical attention since it may signify serious medical conditions like cancer.

Hemoptysis is a condition where the patient spits out blood from the lungs or the bronchi while coughing. The condition requires immediate evaluation and treatment.

Hemoptysis is classified as:

Hemoptysis should be differentiated from bleeding that originates from the nose and throat, and hematemesis (vomiting of blood from the upper digestive tract). The presence of associated symptoms like chronic cough, blood streaked sputum, change in the type of cough, fatigue, chest pain, breathlessness and wheezing make it more likely that the patient is suffering from hemoptysis.

In some cases, the exact cause of hemoptysis cannot be detected. In others, the cause is diagnosed through the symptoms of the patient with the help of several tests. Various conditions that may cause hemoptysis are listed below:

These conditions are diagnosed through examination of the patient and chest x-ray.

1. Which doctor should I visit in case I suffer from hemoptysis?

You should visit a Pulmonologist or lung specialist in case you suffer from hemoptysis.

2. Why should hemoptysis be promptly treated?

Hemoptysis results in sudden blood loss, which if massive could result in collapse. Hence massive hemoptysis should be treated as an emergency. Besides, even mild bleeding could signify the early stages of a disease condition like lung cancer. Therefore, any bleeding from the lungs should be evaluated as early as possible. 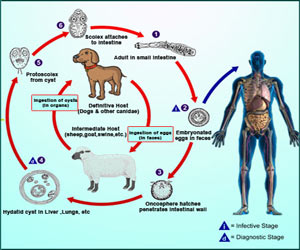 Hydatid Disease
Hydatid Disease is also referred to as echinococcosis or echinococcal disease. Hydatid results from a parasitic infection due to a tapeworm of genus Echinococcus.
READ MORE