Fainting or syncope is characterized by transient loss of consciousness and a spontaneous recovery. 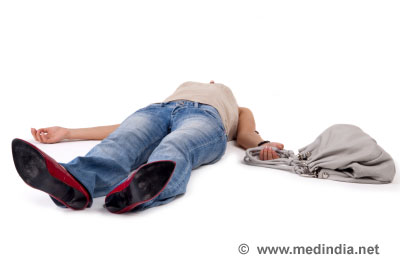 Fainting or syncope is a common symptom suffered by many adults and children. A typical fainting attack occurs suddenly with a transient loss of consciousness. The patient usually falls down, but promptly recovers completely without any treatment.

Syncope is a result of decreased blood flow to the brain. It often accompanies a change in posture. The most common cause of syncope is a vasovagal attack. Certain situations like emotional or painful situations result in stimulation of a nerve called the vagus nerve. This, in turn, slows down the heart resulting in a syncopal attack.

Syncope should be differentiated from the following:

Causes of fainting could be reflex-mediated, cardiac, orthostatic or cerebrovascular.

Causes of syncope include:

1. Which doctor should I visit in case I faint?

A single fainting episode may not mean much and may not require treatment. However, if you suffer from repeated episodes, it is better to meet your general practitioner who may evaluate you and refer you to a specialist if necessary.

2. What are the tests used for diagnosing the cause of fainting?

Fainting is diagnosed based on a complete physical examination. An ECG should be done to rule out cardiac cause. A twenty-four hour (Holter) electrocardiographic monitoring is done to rule out suspected arrhythmias. Echocardiography and exercise testing may be used in some cases. Tests like computed tomography (CT), magnetic resonance imaging (MRI), electroencephalography (EEG), and carotid ultrasonography are advised only if a neurological cause is suspected.

Research Sheds Light on Fainting Factor in Cardiac Arrests
The survival rate is less than five percent in the 45,000 sudden cardiac arrests that occur each year in Canada.

Fainting is Familial - Study
A recent study carried out on twins suggests that fainting may be inherited, but not through a single gene.

Fainting - First Aid and Emergency Treatment Guide
A quick and simple First Aid guide on how to administer treatment for Fainting.

Beauty Parlor Stroke Syndrome
Beauty parlor stroke syndrome is a form of vertebrobasilar insufficiency that causes symptoms of mild to severe stroke after a hair wash in a beauty parlor.

Red Flag Symptoms You Must Never Ignore
Any deviation from normal health can cause symptoms, some of which are ominous and need immediate attention.
Sign up for Wellness Consult a Doctor Sign up for Selfcare
Advertisement
Health Topics A - Z
A B C D E F G H I J K L M N O P Q R S T U V W X Y Z