Redness of the eye occurs due to the dilation of the blood vessels of the eye, which makes the eye look blood shot. In most cases it is a sign of inflammation or of a disease.

Commonly, redness of the eye is caused by exposure to sun or exposure to foreign bodies, dryness, infection, allergy or any other trauma. 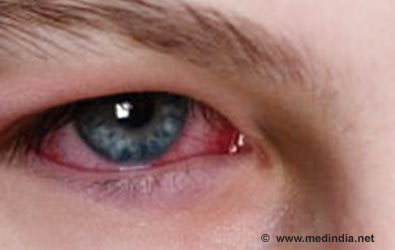 Red eyes can also occur due to straining, as can be seen during excessive coughing. This leads to a bloody area on the sclera which usually clears up with time.

The degree of redness is not indicative of the seriousness of the condition. Usually, the redness of the eye is not a health threat and resolves on its own. However the following symptoms may indicate an underlying serious condition and may require medical attention 

Other reasons for redness of the eye involves cold, allergies, foreign particles in the eye, acute glaucoma, or bleeding from medications.

2) How is redness of the eye treated?

The key step to managing redness of the eye is to carry out a proper diagnosis at the proper time. Some conditions such as blepharitis, subconjunctival hemorrhage, conjunctivitis, foreign bodies, are uncomplicated and can be managed by a general physician. However, more conditions like Corneal ulcers, endophthalmitis iritis or penetrating foreign bodies must be treated as an emergency and must be seen by a specialist at the earliest. Those who are having problems with their vision, along with eye redness require immediate medical attention. Steroids must be administered only as directed by a specialist.

Blind People Help Scientists Resolve Migraine Mystery A discovery among blind people has helped scientists resolve a mystery why light can make a migraine go from headache to head-splitter, according to a study published on Sunday.

Diabetic Retinopathy The term 'diabetic retinopathy' refers to changes in the retina which often occur in people with diabetes.

Eye Infections Eye infection is a common problem that often causes pain and discomfort to the eyes. Common symptoms of eye infection include pain, redness of eye or eyelids, eye discharge.

Eyelid Bump Our eyelids protect our eyes and keep them moist. Swelling of the eyelid may be localized due to chalazion, stye etc., or it could be a generalized swelling due to edema of the eye.

Quiz on Eye Disorders (Advanced) When your eye is the mirror to your soul, how can you ignore your eye health? Take this quiz to find out how much you know about the common eye ...

Uveitis Uveitis refers to inflammation of the uvea of the eye resulting in swelling and destruction of eye tissues. Symptoms of uveitis include eye redness, pain and blurred vision.

Pinguecula Pinguecula is a yellow coloured harmless growth present on the sclera (white part of the eye), in between the two eyelids.