Dyspareunia is a type of sexual dysfunction where sexual intercourse is painful. It affects women as well as men who are sexually active, irrespective of their age. The pain may appear during or soon after intercourse. It can cause relationship difficulties in the couple, and necessitates early detection of the underlying cause and appropriate treatment as soon as possible.

A carefully obtained history gives the first pointer to the cause of dyspareunia. The patient should be made as comfortable as possible so that he/she can feel free to talk about the sensitive topic. This is followed by a gentle physical examination to identify the possible cause without making the experience painful for the patient. Several locations on the genitalia are touched with a cotton bud so that the patient can indicate the location of the pain. Diagnostic tests like ultrasound, blood tests and tests on secretions are conducted as necessary to identify an underlying cause.

What are the Causes of Dyspareunia?

Dyspareunia can occur due to physical or psychological causes.

Physical causes of dyspareunia in females:

Dyspareunia in females may be due to problems in the external genitalia or the vagina, or in deeper structures like the cervix or the pelvis. Dyspareunia due to superficial causes occurs during initial penetration, while deep pain occurs during deep thrusts of the penis.

Causes of superficial dyspareunia include the following:

Causes of deep dyspareunia include the following:

Endometriosis, especially of the rectovaginal septum:

Endometriosis is a condition where the tissue lining the uterus is also found in other parts of the pelvis. The tissue bleeds during menstruation and can cause pain and scar tissue formation. Dyspareunia particularly occurs if the septum that separates the vagina from the rectum (lower part of the large intestine) is affected by endometriosis.

Pelvic inflammatory disease is an infection of the deeper structures of the reproductive system like the uterus, fallopian tubes or ovaries. The infection may follow an untreated sexually transmitted disease. Infection of the cervix (cervicitis) can itself cause dyspareunia or can travel upwards resulting in pelvic inflammatory disease. Beside dyspareunia, symptoms include pain in the lower abdomen, fever and bleeding between periods.

A normal uterus is bent forwards over the bladder. In retroverted uterus, the uterus is bent backwards instead of forward and can cause dyspareunia. It is diagnosed during examination by the doctor. Surgery may be necessary to reposition the uterus. In some cases, the ovaries may be prolapsed in the pouch behind the uterus, called the pouch of Douglas, which may further contribute to dyspareunia.

Infection of the urinary bladder produces deep dyspareunia. The patient also complains of pain over the bladder and while passing urine, along with fever, urgency and more frequent passing of urine. Blood may be present in the urine. Similarly, irritable bowel syndrome, which causes abdominal pain and bowel dysfunction like constipation or diarrhea, can also cause dyspareunia.

Causes of dyspareunia in males:

How is Dyspareunia Treated?

Treatment of dyspareunia depends on the cause as outlined below:

Latest Publications and Research on Dyspareunia

Clinical Features of Vaginitis
Cervical inflammation is suggestive of cervicitis rather than vaginitis. Characteristic of vaginal discharge are - Trichomonas is classically associated with a purulent discharge.
READ MORE 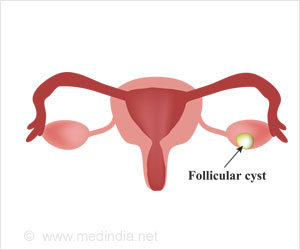