Ear discharge is of different types depending on the underlying cause. 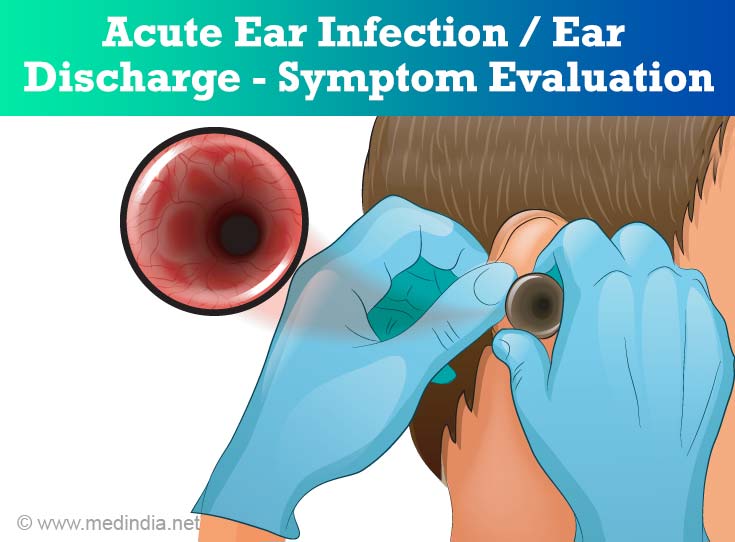 The type of ear discharge gives a clue of the underlying cause. For example:

Ear infection or ear discharge is diagnosed using an instrument called an otoscope. The otoscope enables direct visualization of the external canal and the eardrum. During the examination, a gentle puff of air is blown at the eardrum in order to determine if there is a fluid in the middle ear. Normally, the eardrum will move back and forth; but if there is excess of fluid, the eardrum will not move.

Otitis media is caused by:

The infection usually follows a common cold with viruses such as respiratory syncytial virus, rhinovirus and influenza virus. After a few days of stuffy nose, the patient suffers from severe ear pain due to accumulation of fluid and a buildup of pressure behind the eardrum. The pain usually settles in a day or two but can last over a week. The fluid accumulation is followed by secondary bacterial infection.

Children with middle ear infections often suffer from fever. A rupture of the eardrum results in relief of pain and drainage of pus into the ear canal. The drainage is usually milky white to yellow, sometimes with a foul odor. It is treated with antibiotics.

Otitis externa is caused by:

Symptoms of otitis externa include itching, scaling with a red or moist ear canal and pain that increases with the movement of ear lobe, including chewing. This type of infection is common in swimmers and hence referred to as Swimmers ear. Inflammation and swelling of the skin of the ear may result in a feeling of fullness in the ear and loss of hearing. In some cases, a purulent discharge may be present. Bacterial infection can spread to the skull bone especially in patients with diabetes or reduced immunity resulting in a condition called malignant external otitis.

In case of fungal otitis externa, the patient may not suffer from any symptoms or may complain of discomfort with itching and a feeling of fullness in the ear. The ear canal should be cleaned thoroughly with 1% acetic acid in the alcohol. Clotrimazole is most effective in these cases. Antibiotic drops are used to treat bacterial infection.

Besides infection, other causes of ear discharge are:

1. Which doctor should I visit in case I suffer from ear discharge?

You should visit an ENT (Ear-Nose-Throat) specialist in case you suffer from ear infection.

2. When does ear discharge indicate a serious problem?

A clear ear discharge following a head injury could be due to a fracture in the skull and should be attended to immediately. In addition, ear discharge due to infection should be treated at the earliest to avoid hearing loss.

3. What is the function of wax in the ear?

Wax is normally secreted by the glands lining the ear canal. It protects the ear by trapping dust and microorganisms. It also prevents irritation of the ear canal when it comes in contact with water.

doctor i have a sister who is on and off discharge since childhood,what do you think is the solution to this cause

13 Point Symptom Score To Monitor Ear Infections In Infants As reported in The Pediatric Infectious Disease Journal, improvement in infants with middle ear infection can be monitored by a symptom score

Audiometry Audiometry or the hearing test helps to determine the ability of a person to hear various sounds and consequently identify the location of damage in a person with diminished hearing sensitivity.

Otitis Externa / Swimmer's Ear Infection Otitis externa, also commonly referred as Swimmer''s Ear, is an inflammatory condition that affects the external ear canal, which is the passage that connects the eardrum to the outer visible ear.

Airplane Ear / Ear Barotrauma Airplane ear, also called barotrauma, is caused during takeoff and landing of a flight due to pressure changes in the ear. Yawning and swallowing help ease it.