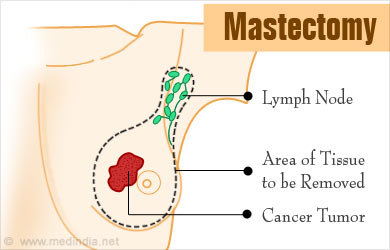 Simple or Total Mastectomy: This type concentrates on breast tissue itself in which entire breast tissue is removed by a surgeon. Axillary lymph node dissection (removal of lymph nodes in the underarm area) is not required. No muscles are removed from underneath the breast either. However, in some cases occasional removal of lymph nodes may occur as they happen to be located in the breast tissue taken during surgery. Simple or total mastectomy is suitable for women with multiple or large areas of ductal carcinoma in situ (DCIS) and also for women seeking prophylactic mastectomies (breast removal to prevent any chance of breast cancer occurring).

Modified Radical Mastectomy: It involves removal of both the breast tissue as well as the lymph nodes. In this type, entire breast is removed by a surgeon. Dissection of the axillary lymph node is done, during which I and II levels of underarm nodes are removed. However, no muscles are removed from beneath the breast. This type is usually suitable for those with invasive breast cancers. Lymph node examination helps to identify if cancer cells have spread to other areas of the body.

Radical Mastectomy: This is the most extensive type of mastectomy, which involves removal of entire breast as well as levels I, II, and III of the underarm lymph nodes and even the chest wall muscles under the breast. This is recommended for patients in whom the breast cancer has spread to chest muscles under the breast. Radical mastectomy was more common in the past, but is now replaced with modified radical mastectomy that has proven to be equally effective and less disfiguring.

Partial Mastectomy: It involves removal of cancerous part of breast tissue and some normal tissue around it. Lumpectomy (breast-conserving surgery) is a form of partial mastectomy, in which only the tumor is removed as compared to partial mastectomy where more tissue is removed.

Subcutaneous ("nipple-sparing") Mastectomy: It involves removal of all of the breast tissue, other than the nipples. This type of mastectomy is not commonly performed as compared to simple or total mastectomy, since more breast tissue is left behind post-surgery, which could possibly develop into cancer at a later stage. Surgeons have reported possibility of breast distortion and numbness of the nipple during the breast reconstruction procedure post subcutaneous mastectomy.

Mastectomies are generally very safe procedures having minimal complications. Most people make a good recovery and stay in the hospital only for a night. However, some people may need to stay for a few days in the hospital. It usually takes 3 to 6 weeks for full recovery. However, there are few risks involved with mastectomies which include: 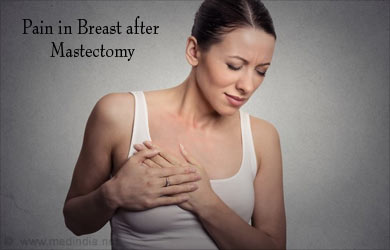 Before surgery, meeting with the surgeon and an anesthesiologist needs to be done to discuss the operation, review medical history and determine the plan for anesthesia. Questions can be asked at this stage to make sure that procedure is well understood including the reasons and risks of the surgery.

Before the Procedure: Doctor or nurse would advise when to arrive at the hospital. Mastectomy without breast reconstruction usually takes 1 to 3 hours and one additional day in the hospital is required. In case of double mastectomy (both breasts removed) more time in surgery and hospital would be required. In case of sentinel node biopsy, a radioactive substance or blue dye or both shall be injected into the area around the tumor or skin above the tumor. The dye would then travel to sentinel node or nodes, allowing the doctor to see the presence of tumor and remove them during the surgery.

During the Procedure: Mastectomy is generally performed under general anesthesia, therefore one is not awake during the surgery. Surgeon makes an elliptical incision around the breast. The breast tissue is removed, and depending upon the procedure other parts of the breast may also be removed. Irrespective of mastectomy type, some breast tissue and lymph nodes would be sent to the laboratory for analysis. If breast reconstruction is planned after mastectomy, a plastic surgeon would coordinate with the breast surgeon for being available at the time of surgery. In women in whom radiation therapy is planned after surgery, radiation oncologist should be met with, prior to the surgery, for discussing benefits and risks and also to know how radiation will impact breast reconstruction options. Once the surgery is completed, the incision is closed with sutures that either dissolve or are removed later. One or two small plastic tubes are placed where breast was removed, so as to drain any fluids that will be accumulated after surgery. The tubes are sewn into the place and ends are attached to a small drainage bag.

After the Procedure: One is taken to the recovery room where blood pressure, pulse and breathing are monitored. Dressing (bandage) is placed over the surgery site. There might be some pain, numbness and pinching sensation in the underarm area. The patients receive instructions for home care and recognizing any signs of infection. Also, instructions regarding when to resume wearing a bra or breast prosthesis are given. Prescription for pain medications are given and possibly an antibiotic too.

Radiotherapy After Mastectomy to Help Women With Breast Cancer in a Few Lymph Nodes
Having a radiotherapy treatment after mastectomy may help women whose breast cancer has spread to just a few lymph nodes, a new study found

Breast Augmentation - Surgical Procedure
Breast augmentation or augmentation mammoplasty uses breast implants to increase breast size, alter shape or texture. It may be done for a variety of reasons.