Over the past century, very few topics have had the potential to attract public attention, as has radiation. Our perceptions of it have shaped policy in arenas as diverse as medical care, energy, and international relations. The love affair with radiation has been a moth and flame one, as revealed by certain radiation related events. Despite the rocky affair, we have either adored or despised it, depending on the morning headlines.

The media has played a significant role in adding glamour and glory to radiation. The public can't be blamed for embracing the new rays, as headlines like this appeared in newspapers across the globe - Something about X-Rays for Everybody. Following the discovery of X-rays, it became omnipresent. It became so common that city streets began to house fluoroscopes that were easily operable with coins. Particularly popular were exhibitions where subjects underwent fluoroscopy for hours to amaze the customers. At that time publicity about the cosmetic benefits of X-ray radiation was at an all time high, influencing many women to go for it. This insatiable quest of women for beauty resulted in massive radiation burns in thousands of women.

Wondering what the above lines refer to?

It reflects Sound, which is the basis of life and even has healing powers. Not convinced? Then think of those times when you have lost yourself completely listening to good music or perhaps mesmerized by the sound created by sea waves bashing against the shore? Now may be you agree with the remarkable power of sound regarding providing comfort. 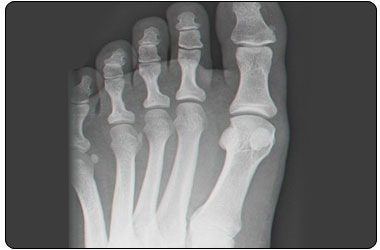 Sound is nothing but a form of vibration. Sound can trigger memories, release past memories, stimulate joy. In fact, sympathetic resonance is a healing technique in which the practitioner applies positive intention, focus and attention to the sound healing instrument being used.

Latest Publications and Research on X-Ray

Ultrasound During Pregnancy Ultrasound during pregnancy is a non-invasive procedure and is an integral part of the fetal monitoring during the pregnancy.

Colle's Fracture Colles fracture or broken wrist is a wrist fracture, which occurs within an inch of the wrist joint. Colles fracture involves the forearm bone's distal end of the radius.

Fracture Neck of Femur - Surgical Procedure Femoral neck fracture is a type of hip fracture common in elderly, osteoporotic women. In younger persons, it may occur with unaccustomed strenuous activity or due to cancer.

Radiation Hazards Ionizing radiation can damage living tissue in the human body. It strips away electrons from atoms breaks some chemical bonds.

Chest Radiography Do you know what chest radiography is and how it is done? Read on for procedures on chest radiography and its use in diagnosis.
Sign up for Wellness Consult a Doctor Sign up for Selfcare
Advertisement
Health Topics A - Z
A B C D E F G H I J K L M N O P Q R S T U V W X Y Z