Wilsons disease is a rare inherited systemic disorder of copper metabolism. Copper is a key ingredient in the development of healthy nerves, bones, collagen, and the skin pigment melanin. Normally any excess is excreted through bile  a substance produced in your liver. Though, in this disease, copper initially accumulates in the liver from birth onwards, it may not manifest into visible symptoms till around adolescence. They generally occur between 6-45 years of age, but it is possible they may come on in mid-life. 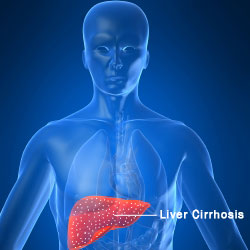 The most visible sign of Wilsons Disease is the rust colored rings around the edges of the cornea.

When the copper has filled the liver completely it causes inflammation, disease and loss of function of the liver totally and also enters other organs like the eyes, brain and kidneys. The range of problems are, a mild elevation of enzymes to total failure of the liver, weight loss, fatigue, abdominal swelling perhaps by fluid accumulation, loss of appetite, and even jaundice.

If you are very young these symptoms are more acute. After teenage there are neurological symptoms which stand out prominently.

Wilson's disease is a rare disease and affects only 1 in 30,000 of the population. It has equal propensity for men and women in all racial groups.

Wilsons disease should not be confused with Wilsons (temperature) syndrome, also called Wilsons thyroid syndrome or WTS. The syndrome describes as a thyroid-related one that presents with various non-specific thyroid-related symptoms with normal thyroid lab function tests. Some doctors treat it with a thyroid drug called triiodothyronine. However The American Thyroid Association (ATA) does nor believe in its existence as it lacks "well-known and widely-accepted facts" concerning the functions of the thyroid and has raised concerns about the proposed treatments with any drug as this they believe is potentially harmful.

Though Wilson Disease is a rare disease, there are those like my daughter and I who are both diagnosed with WD! It is great to bring more awareness and support to this disease. Though my daughter and I both have our WD under control with our zinc regimen - Gluzin - we have many struggles to contend with. Thanks for the WDA!

Liver Cancer Treatment - Animation
Liver Cancer is the uncontrolled growth of cells in the liver. The present section provides a graphic description of the various forms of liver cancer treatment in addition to the latest techniques such as Chemoembolisation and Radio frequency ...

Liver Cancer - Animation
Liver is the largest organ inside the human body. It performs 500 different functions and processes 720 liters of blood per day. The important functions of the liver, the development of liver cancer and it's symptoms are presented in this ...