Whiplash is a common term used to describe neck sprain or neck strain, which is a type of injury affecting the soft tissues of the neck, such as the muscles ligaments and tendons.

Whiplash is caused by an unusual force that brings about sudden forward-backward movement of the neck, beyond the normal range of motion. It occurs when the head moves forward or backward in a jerking motion and this causes a strain in the muscles and ligaments of the neck, resulting in whiplash. 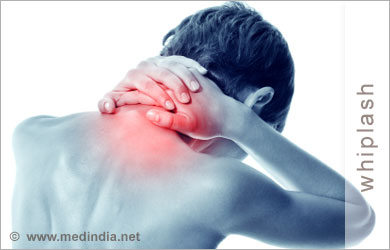 Whiplash most commonly occurs in those who have suffered a motor vehicle accident. The speed of the vehicle is not a deciding factor as a speed of even 15 miles /hour can cause whiplash in the occupants. Other causes include accidental falls, assault or mishaps during sporting activities. Repetitive stress to the neck, as caused by holding the telephone to the ear for too long or child abuse involving shaking a child are also reasons to bring about symptoms of whiplash in a person.

Each year, in the USA alone, 5,000 whiplash injuries result in quadriplegia, that is, paralysis of all four limbs. However, after a year of the injury only 1 in 5 patients remain symptomatic.

Whiplash symptoms may not manifest themselves in some people until 24 hours after the trauma was initiated. In most individuals, the symptoms manifest within the first few days of the accident or assault.

Whiplash-associated disorders sometimes include damage to the brain too.

As an emergency treatment, a collar may be placed around the patients neck to restrict movement in order to control pain and further injuries.

Once the doctor examines the patient, an X-ray may be advised. If it is normal, then the patient may not need to wear the collar any more. But if the x-ray shows abnormality, then an imaging study such as CT scan or MRI, may be advised as x-rays are inadequate to reveal soft tissue injuries.

If you suspect whiplash injuries, consult your GP who will carry out primary exams on you and, if the need be, direct you to a specialist.

If it is a soft tissue injury directed at the muscles, tendons or ligaments, then the symptoms may not be of a serious nature. In such cases, home care may be carried out, which involves methods that are mostly aimed at alleviating pain. Application of ice or cold packs to the affected area for 15-20 min is likely to reduce pain and swelling. This needs to be repeated every hour for the first two to three days. Along with this, pain medications such as ibuprofen and naproxen, and muscle relaxants, as prescribed by the doctor, may be taken.

Whiplash treatment in the past included wearing a collar. This trend, which has since been discontinued, has been replaced by ice treatment for the initial 24 hours, followed by gentle movement of the neck.

If the symptoms are more severe, then doctors might prescribe a range of medications including narcotic pain relaxants, NSAIDS, muscle relaxants and benzodiazepine medications, involving valium. Neck injuries linked to bone or spinal cord damage may demand surgical intervention. Physical therapy with range of motion exercises, muscle strengthening or electrical stimulation may also be advised by the doctor, depending upon the severity.

It is important for the patient to take care not to indulge in stressful activities and to limit head motion until pain and the muscle tightness go away.

Follow-up care may be required depending upon the severity of the injuries. This may include, home exercises, physical therapy or a visit to your specialist.

Latest Publications and Research on Whiplash

Neck Pain Symptom Evaluation
Neck pain may be due to minor causes like strain and sprain or due to more serious conditions like disc prolapse, cancer or fractures.

Injuries Related to Sports
Injuries are common in the sporting world. They can be minor like bruises and cuts, serious like fractures and sometimes fatal like head injuries.

Women Drivers Suffer More from Whiplash Injuries Than Men
Women drivers are three times more likely than men to suffer whiplash injuries if their car is hit from behind say Swedish researchers.

Head Injury
Head injury or traumatic brain injury is a leading cause of disability among children and young adults that leads to varying degrees of physical and mental stability. Fortunately, it is also one of the preventable brain disorder.

Whiplash and Conditions that Mimic Whiplash
Whiplash injury is an injury that common with road traffic accidents. Whiplash happens due to sudden acceleration of the vertebrae in the cervical spine.
Sign up for Wellness Consult a Doctor Sign up for Selfcare
Advertisement
Health Topics A - Z
A B C D E F G H I J K L M N O P Q R S T U V W X Y Z