Insulin is a key regulator of the body's metabolism. It is produced by the islets of Langerhans of the pancreas. The beta cells produce insulin. Other hormone produced by pancreas is Glucagon, which has the exact opposite effect as insulin. Insulin is a polypeptide chain.

Insulin rises to its peak level within 10-minutes of food consumption. Insulin then enables glucose and amino acids to enter cells in the body, particularly muscle and liver cells. Here, insulin and other hormones direct whether these nutrients will be burned for energy or stored for future use.

(The brain and nervous system are not dependent on insulin; they regulate their glucose needs through other mechanisms.)

Most carbs come from starches, fruits, milk, and sweets. Try to limit carbs with added sugars or those with refined grains, such as white bread and white rice. Choose healthy carbohydrates, such as fruit, vegetables, whole grains, beans, and low-fat milk, as part of your diabetes meal plan.

I disagree with this post. Eating up 6 times a day with the macros that you have mentioned will definitely make the disease worst. You can't treat dietary disease with more food rich in carbohydrates.

WHAT ABOUT THE SEA FOOD SUCH AS FISH, PRAWN and LOBSTER CAN WE USE THE ABOVE SAID?

Diabetes is said to be a sedentary lifestyle disease as people seldom get time to exercise and the food they eat is not properly converted.
Types Of diabetes
Type 1 Diabetes â Your body doesnât produce Insulin at all.
Type 2 Diabetes â Your body doesnât produce the required amount of insulin.
Gestational Diabetes - You develop this at the time of your pregnancy.
Although Diabetes is not curable, there are some remedies to keep Diabetes in check
1.Do not skip meals.
2.Avoid foods having high sodium/sugar content.
3.Avoid smoking, Drinking, Non vegetarian foods and Sweets completely.
4.Have fresh vegetables like lemon, Bitter Gourd, Amla, Tomatoes, Cucumbers more in your diet
(Keep in Your Mind, The body needs more fibers and these vegetables are a good source of Fiber).
5.Try walking for minimum 3 â 4 kilometers a day briskly. 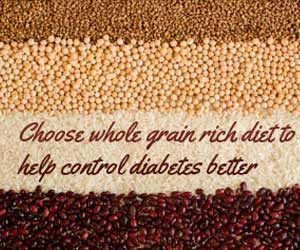