Walking Corpse Syndrome or Cotard's Syndrome is a mental disorder in which patients experience delusions that they are dead, do not exist, are putrefying or have lost their vital organs.

Walking Corpse Syndrome or Cotard's Syndrome is an uncommon neuropsychiatric disorder in which patients experience delusions or false beliefs that they are dead, do not exist, are putrefying or have lost their vital organs. In some cases, they can even smell the rotting flesh. The condition can simply be described as "existence denial". It is sometimes accompanied by symptoms of guilt, anxiety and negativity. Paradoxically, some patients may have delusions of immortality.(1✔ ✔Trusted Source
Cotard Delusion

Though the exact cause is not known, lesions in frontal and temporal regions (front and sides) of the right hemisphere of the brain have been associated with the disease.

Some patients suffering from Walking Corpse Syndrome have died of starvation since they deprived themselves of food thinking that they are already dead. The patients also have a tendency to attempt suicide and harm themselves.

The condition is diagnosed on the basis of symptoms of the patient. Tests are used to diagnose associated diseases and rule out other conditions. Current treatment involves medication with antidepressants, antipsychotics and mood stabilizers. Electroconvulsive therapy in combination with medications has been reported to be more effective than medications alone.

Walking Corpse Syndrome occurs due to lesions in frontal and temporal regions of the right hemisphere of the brain.

The exact cause for Walking Corpse Syndrome is not known. However, studies suggest that the cause is localized in the frontal and temporal regions of the right hemisphere of the brain.

Risk factors that have been associated with Cotards syndrome are- 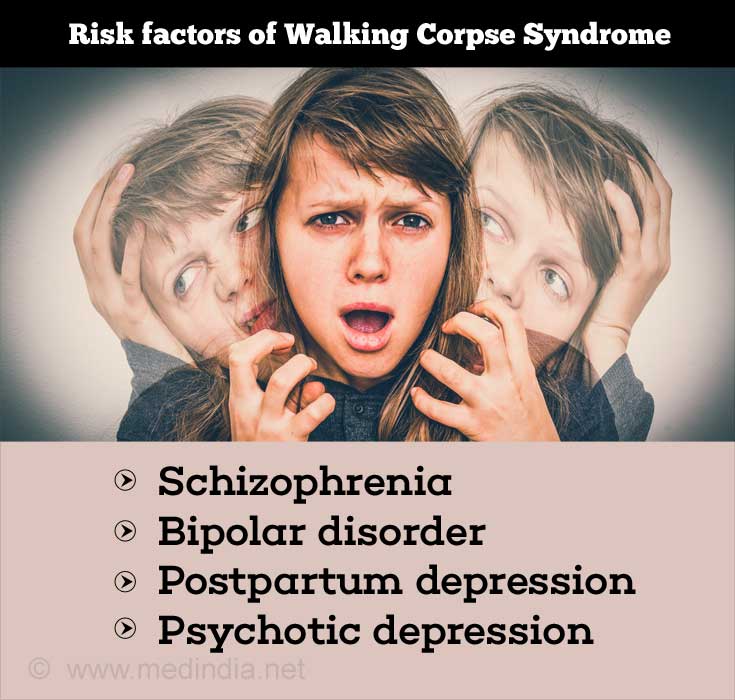 People with Walking Corpse Syndrome believe that they are dead.

Patients with Walking Corpse Syndrome have a vague feeling of anxiety in the initial stages. This is followed by a belief that they are dead, do not exist, are putrefying (they can even smell rotting flesh) or have lost their vital organs. Some patients actually feel that they are immortal.

Clinical features include depression, feeling of guilt, negativity and insensitivity to pain. The patients may also believe that they are paralyzed or have auditory or smell-based hallucinations.

People affected by this disorder cannot recognize their own face and do not show any interest in social life or pleasure. They are always paranoid and neglect their own hygiene. They have a suicidal tendency or may harm themselves. They lose sense of reality and have distorted view of the world.

Yamada suggested a classification of Cotard's syndrome; he divided it into three stages based on the symptoms: 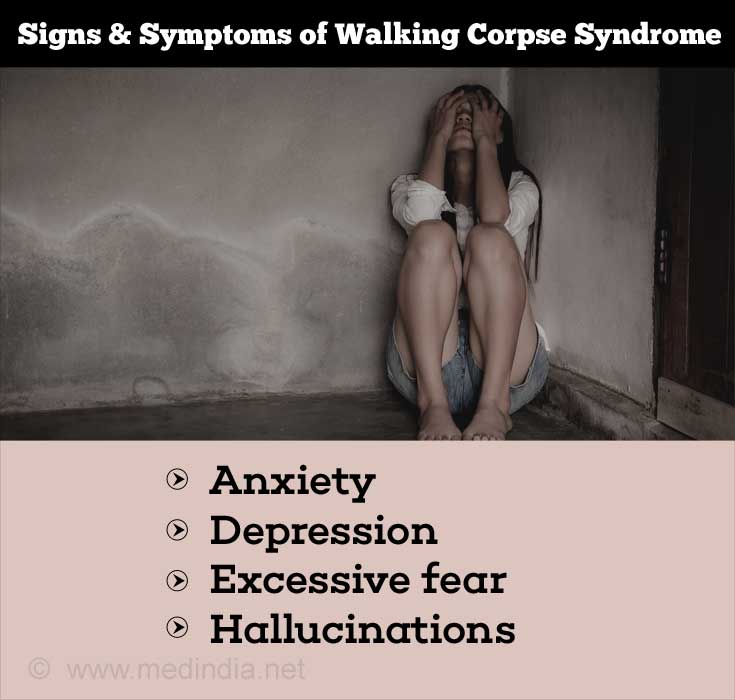 Walking Corpse Syndrome is diagnosed based on the patients history and symptoms. Tests are used to exclude other conditions as well as to diagnose associated diseases. These tests include: 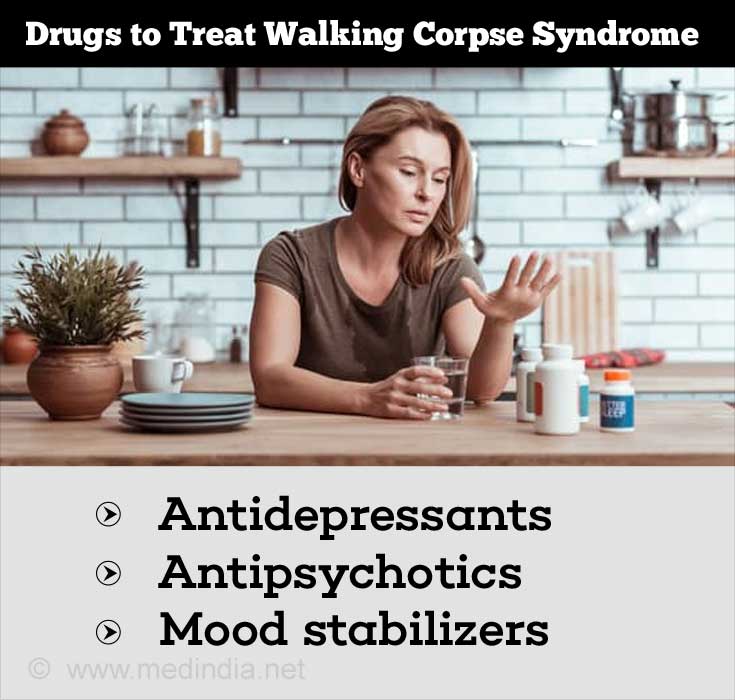 The overall prognosis of disease is determined by severity of the disorder and the treatment strategies used to manage it. Some patients recover with proper treatment. Some die of starvation. The patients also have suicidal tendencies and should be watched over.(4✔ ✔Trusted Source
About Walking Corpse Syndrome

Some interesting cases of Walking Corpse Syndrome reported in medical literature are listed below:

A 53-year old Filipino woman was brought to a hospital when she complained that she was dead, smelled like rotting flesh, and wanted to be taken to a morgue to be with dead people. Upon questioning, she expressed fear that paramedics were trying to burn down her house. She also complained of hopelessness, low energy, decreased appetite, and excessive sleepiness. She responded to treatment with medications.

A patient who was taken to South Africa from Edinburgh after a period of hospitalization was convinced that he was taken to hell after his death. He believed that he had died of septicemia, AIDS or an overdose of yellow fever injection. He felt that it was not his mother who accompanied him, but her spirit.

Brit Man Suffered from Walking Corpse Syndrome for Nine Years
A British man suffered from a rare condition that made him think that he is no longer alive for the last nine years.

Azithromycin may Cause Sudden Cardiac Death
View all