Human voice is a sound made by exhaled air coming through the vocal cords. This air is modified along the paths of the oral and nasal cavities.

When the lungs pump out adequate airflow and air pressure, the thin membranes of the voice box, called vocal cords, chop up the airflow into pulses that form the sound source. The fine tuning is done by the muscles of the voice box, or larynx, that adjust the tension of the vocal cords to produce different levels of intensities (volume) and frequencies (pitch). This sound is resonated with muscular adjustments along the pharynx, mouth and nose to produce the desired sounds and combinations. 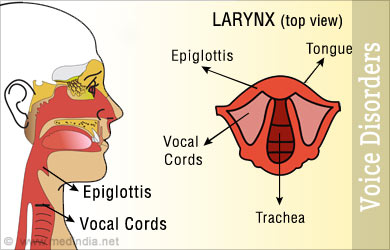 The amazing intricate arrays of sound that these vocal folds produce can range from various frequencies as found in singing, to suggestions of emotions such as anger, surprise or happiness.

The term phonation means to produce sound from the vocal cords and the term dysphonia means faulty voice. Aphonia is a term used to refer to complete loss of voice.

The function of the vocal folds and its muscles is essentially that of preventing food from passing into the wind pipe or trachea. When we swallow, the food is pushed along the pharynx, which diverges into the esophagus and the trachea. The vocal cords close tightly when the food comes through so that the muscles of the food pipe open up to allow the food to pass to the digestive system. The muscles of the larynx are controlled by the 10th cranial nerve, namely, Vagus nerve.

Voice disorders can occur due to a variety of reasons. The causes can be broadly categorized according to the problem that occurs. 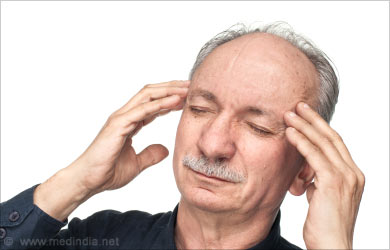 The symptoms of voice disorders present according to the nature and cause of the abnormality of voice. Based on the manifestations of the symptoms, professional help can be sought by the individual and get treated for the condition. The following symptoms may occur in isolation or in combination: 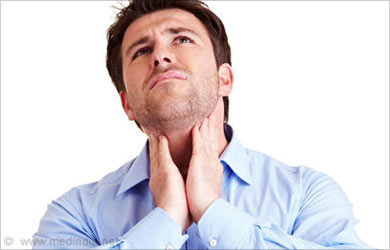 If such symptoms appear for three or more days, consulting a ENT surgeon is necessary to take appropriate measures. Organic or structural problems can be rectified with medicines, etc. However, most voice disorders can be corrected with functional voice therapy, either with or without medical interventions. 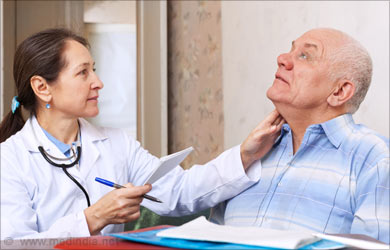 Hi folks can any one suggest me any home remedies for voice disorders?

Aphasia Aphasia is a condition where the patient has a language disorder. The patient has problems with comprehension, expression, repetition, reading and writing.

Communication Disorders Communication disorders are characterized by a dysfunction in speech, language or sound processing.

People With Voice Problems Ignorant of Treatment Voice problems do not get the medical care and attention it deserves in America, because two-thirds of sufferers are not aware of the available treatment or they feel it will just go away.

It Is Female And Not Male Teachers Who Face Increased Voice Problems! According to a new study, teachers, especially women, face a greater risk of hurting their voices than most of the other professionals.

Cough Symptom Evaluation Cough is a symptom of a condition usually affecting the respiratory tract. It may be acute or chronic, wet or dry. The type of cough can help the physician diagnose the underlying condition.

Difficulty Swallowing Symptom Evaluation Difficulty with swallowing or dysphagia is a problem, which if left untreated, could cause malnutrition and seriously affect the patient. Treatment of dysphagia depends on the underlying cause.

Laryngeal Cancer Laryngeal cancer is also called cancer of the larynx or throat cancer or laryngeal carcinoma. It usually affects men over the age of 55 years.

Health Hazards of Smoking - Stroke and Laryngeal Polyps Smoking causes deposition of fatty deposits in the blood vessels which is called atherosclerosis. Slowing of blood flow also occurs which in turn can lead to thrombus formation. This can result in stroke.

Language Areas in The Brain The mechanism of how human brain processes the language to express and comprehend the verbal, written, gestures and symbols is still a mystery.
Sign up for Wellness Consult a Doctor Sign up for Selfcare
Advertisement
Health Topics A - Z
A B C D E F G H I J K L M N O P Q R S T U V W X Y Z