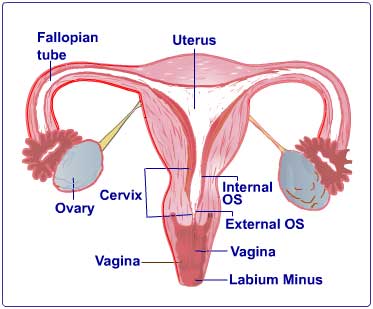 Normal vaginal bleeding is the periodic, bloody discharge from a womans uterus during menstruation. It is also known as menorrhea and is characterized by cyclic hormonal changes.

The ovaries in every woman produces an egg, each month, which travels through the fallopian tube and reaches the uterus. If the egg meets a sperm fertilization occurs and an embryo is formed. Otherwise the egg, along with the inner lining of the uterus, breaks down and bleeding occurs through the vagina.

The ovaries also produces hormones which controls the development of female body characteristics and regulate the menstrual cycle.

Normally menstrual bleeding lasts for 3 to 5 days and  during this phase a woman loses about 40 ml of blood and 35 ml of serous fluid. Initially the discharge is bloody but after a couple of days it is more watery or lightly blood stained. The normal range of blood loss varies between 2 to 16 tea-spoonfuls or from 10 to 80 mls. It is due to this monthly blood loss that women are more susceptible to iron deficiency anemia with  low hemoglobin. This is more common among vegetarians

1. Treatment for Vulvovaginal Symptoms after Menopause

I am a 47 year of women, began my period at age 11. I have not had a period for 17 months. All of a sudden I have started bleeding 4 days still hasn't stopped.

I am a 39 year old female. In my early to mid 20's I never bled from intercourse and my lover as very well-endowed. Intercourse never hurt and was very pleasurable and never bled during sex ever nor did I bleed after. Now at age 39 I have a new lover who is very well-endowed, but I have heavy bleeding during and after intercourse. I have no pain and no discomfort at all. Intercourse with my new lover is amazing and wonderful. So I ask, why am I having this bleeding during and after intercourse? I do have a history in these last 10 years of uterine fibroids in which I had a uterine ablation done 8 years ago. And I have always suffered from very heavy, painful, clotty mensus cycles. I have a GYN appt next month. Could my fibroid issue be a factor now at age 39?

Polycystic Ovarian Syndrome Polycystic ovarian syndrome is the most common hormonal disorder among women of reproductive age and can cause infertility.

Dilatation and Curettage - Surgical Procedure Dilation and curettage (D&C) is a common surgery, done on women to scrape and collect the tissue from inside the uterus. The procedure is usually performed under general or regional anaesthesia.

Hysterectomy - Surgical Procedure Hysterectomy is the surgical procedure to remove the uterus and is one of the most commonly done procedure by the gynecologist.

Endometrial Cancer Cancer of the Endometrium, or the inner lining of the uterus (womb) is called endometrial cancer.

Endometriosis Endometriosis is a chronic painful disorder with endometrial tissue found at abnormal sites such as ovary and tubes. It causes pelvic pain and fertility issues.

Quiz on Menopause Menopause is inevitable in a woman's life and it would be apt to be well prepared for it. Learn more about menopause and the best ways of managing it by going through this ...

Menopause Menopause is defined as the state of permanent cessation of menstrual cycles (periods) for 12-months.

Virginity Calculator Are you curious to know how you compare with others of your age when it comes to losing your virginity - if so use our 'virginity calculator' and find out.

Top 8 Things You Should Know About Tampons Tampons are feminine hygiene products designed to absorb the menstrual flow during menstruation. They are easy and convenient to use, once you learn how to use them. Learn eight facts about tampons, before you start using them.
Sign up for Wellness Consult a Doctor Sign up for Selfcare
Health Topics A - Z
A B C D E F G H I J K L M N O P Q R S T U V W X Y Z