Vaccines are administered to children to protect them from infections that could cause death or severe disability.

Vaccines are of three types: 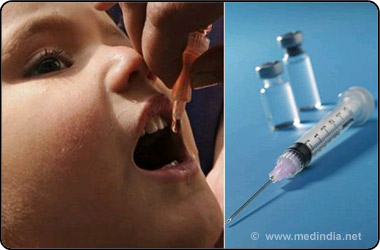 Live attenuated vaccines: These vaccines contain live microorganisms that can multiply to a limited extent in the child, but they are unable to produce an infection. They usually provide long-lasting immunity. They could, however, result in disease in people with decreased immunity, for example, those suffering from cancer, AIDS or under treatment with corticosteroids; live attenuated vaccines should be avoided in people with decreased immunity. E.g. oral polio vaccine.

Toxoids: These are bacterial toxins that have been rendered inactive, but they retain their ability to produce an immune reaction. E.g. tetanus toxoid and diphtheria toxoid.

A vaccine is made often from bacteria and viruses, but is unable to produce an infection in a normal child. However, it retains its ability to produce an immune reaction. The child produces antibodies against the organism, thus conferring protection to the child against that particular organism. For example, if a live attenuated polio vaccine is administered to the child, the child produces an immune reaction against the polio virus in the vaccine. The same antibodies also protect the child if an actual polio virus infects the child.

The Expanded Programme on Immunization (EPI) was launched in India in 1978. It aimed to cover 80% infants against six diseases, diphtheria, pertussis, tetanus, poliomyelitis, typhoid and childhood tuberculosis. The program was later expanded to cover 100% infants in 1985 and was referred to as the Universal Immunization Programme (UIP). Under this program, typhoid vaccination was discontinued and measles vaccine was added. Vaccines are administered free of cost under this program.

Latest Publications and Research on Vaccination for Children

There is a definite relation shown between M M R and autism. Most vaccines are scam and they do more harm than they protect.

Vaccination is the biggest Medical Scam of the Century, people and even doctors are not aware of the ingredients of these vaccines and harmful neuro toxins like Mercury [thimerasol] in them causing large epidemic of neurological disorders, learning disabilities in children.

Keeping track of vaccinations for your baby is indeed very important as it protects your child against a range of serious and potentially fatal diseases. With busy schedules and multiple tasks at hand, it becomes extremely difficult to monitor immunizations and their dates. I came across a simple vaccination app on Google Play store, VacciTrack, that helps to keep track of your childâs immunization schedule till the age of 10. It gives you reminder before the day of vaccination and a full chart along with missed and upcoming vaccines. Hope this helps!

My daughter is 10 years old and is a patient of celebral palsy ,can the vaccines like Tetanus and HPV Vaccine given to her.

Measles
Measles is a viral infection with symptoms of fever,and rashes. Measles is prevented by vaccination and staying away from the infected individuals.

HBV Screening
Tests used for screening hepatitis B are estimation of hepatitis B surface antigen (HBsAg), anti-HBc and anti-HBs antibodies.

Immunization in Children - Trivalent oral polio vaccine TOPV
Poliomyelitis is caused by poliovirus, an entero virus and there are 3 types, type 1,2 & 3. Vaccines against poliomyelitis are available in 2 forms, Salk developed IPV and TOPV was developed by Sabin.

Quiz on Vaccination / Immunization
Vaccines are given to protect us from several infections that often cause disability and even death. Do you know enough about the vaccines that you are taking? Test your knowledge by taking this ...

Top 10 Vaccine Myths Debunked
Childhood vaccination has saved many lives, yet lots more has to be done to increase awareness and eliminate myths regarding vaccines.

Traveling with Children Abroad? - Parents, Stay Alert!
Traveling with children is always challenging as it involves careful planning. Here are some precautions that need to be taken when traveling abroad with kids.

The Essence of Yoga Vent Forte (Theophylline) Indian Medical Journals Blood - Sugar Chart Accident and Trauma Care Find a Hospital Nutam (400mg) (Piracetam) Hearing Loss Calculator Find a Doctor Drug Interaction Checker
This site uses cookies to deliver our services.By using our site, you acknowledge that you have read and understand our Cookie Policy, Privacy Policy, and our Terms of Use  Ok, Got it. Close