Ulcerative colitis is a chronic inflammation of the large intestines. Symptoms of ulcerative colitis are repeated attacks of pain, diarrhea and bleeding from the rectum. The disease also has long periods of remission when a patient is free of attacks followed by relapse or recurrence. Though the disease does not have any age or sex predilection, it often tends to affect younger individuals.

This inflammatory bowel disease closely mimics another disease called Crohn's disease that also falls under the same category and presents a similar picture of pain, bleeding from the rectum and loose stools.

Ulcerative colitis tends to run in families and was for some reason is not seen in Asians, Africans, South Americans and people from Eastern Europe. The incidence is higher in Whites and people of Jewish descent however increasing globalization is reducing this trend. 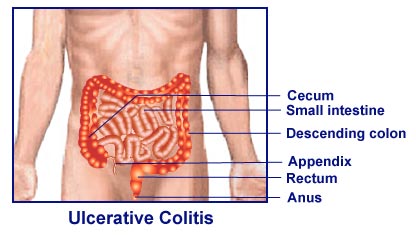 Though the cause is unknown, it is touted to be an immune-linked disorder; an attack, responds to steroids and immunosuppressant drugs. Like other diseases of immune origin, there is no cure for ulcerative colitis.

The severity of ulcerative colitis symptoms depends on the extent of involvement of the intestines, with limited involvement causing milder symptoms. Extensive involvement or pan colitis can give rise to repeated diarrhea, bleeding, and severe crampy pain, necessitating intense medical treatment. The chronic form of the disease gives the patient a wasted look. Malcolm B. Docherty, M.D, wrote about the chronic disease as follows -

"Oh give me carcinoma of the spine.
Or crazed from lues let my spirit fly;
But suffer not misfortune to be mine
From Chronic Ulcerative colitis to waste away and die."

A fulminant colitis with fever or perforation may require surgery.

Barium enemas were used in the past to diagnose the condition, nowadays; actual visualization of the ulcers with biopsy is possible with the help of a colonoscopy.

Regular follow up is mandatory in those with early onset and long duration of illness as this condition can often lead to colonic cancer in the long run.

The first description of Ulcerative Colitis dates back to 640 BC and many physicians up to 170 AD including Hippocrates described a condition with a type of chronic diarrhea associated with blood and ulcerations of the bowel. Ulcerative Colitis as a specific pathology was described by Wilks and Moxon in 1875 and they called it "Inflammation of the large intestine or idiopathic colitis". Crohn's disease of the colon was not recognized as a separate entity until May 13, 1932 when Dr. Crohn presented a paper on "Terminal Ileitis" to the American Medical Association; this was published later that year with the title "Regional Ileitis: A Pathologic and Chronic Entity," under the authorship of Crohn, Ginzburg and Oppenheimer.

Sure thing, he has a difficulty digesting foods. Has anyone ever heard of Habba Syndrome? (We all Habba syndrome at one time or another â Ha! Forgive the cheap pun.) Habba Syndrome was first described by Dr. Saad F. Habba, as a condition in which chronic diarrhea is associated with abnormal activity and excess bile being released by the gall bladder. Dr. Habba (who checks out â he's got his bona fides in order) first described and attached his name to the syndrome (which was published) in the early 2000s. It is different from Irritable Bowel Syndrome, as it doesn't present with abdominal pain and generally improves with fasting. Treatment is usually a course of bile acid binding agent therapy, and some of them are generic â so it might not run you payday loans to treat it, if you get diagnosed.

Acid Peptic Disease
Peptic ulcers occur in presence of acid and pepsin. The two main types are gastric and duodenal but they can also occur at GJ Stoma, lower end of esophagus and Meckels diverticulum.

The Splendid Stomach - Animation
Stomach is the organ where food is mixed, stored and partially digested.

Quiz on Ulcer
A peptic ulcer is a open sore that occurs either in the stomach, in the first part of the small intestine or in the lower esophagus. A peptic ulcer develops due to the effect of excess acid produced in the stomach. It often presents with abdominal ...