Trypophobia / Fear of Too Many Holes

You may have heard of various phobias such as ornithophobia, claustrophobia, hydrophobia and more, but trypophobia is probably the most disturbing, strange and unheard of them all.

Read on to know more about it.

The urban dictionary describes trypophobia as an intense, irrational fear of (organic) holes. Basically, trypophobia is the fear of too many holes and things that have a lot of tiny holes on them.

Though the actual cause of this strange condition is not yet known, it is believed that this condition occurs right from early childhood and proceeds into the teenage years, slowly wearing away. The condition arises as a result of certain external and internal predispositions, or possibly some traumatic event in the earlier stage of life, just like many other phobias.

An individual suffering from tyrpophobia generally experiences a feeling of uneasiness and itchiness on the entire body after looking at a substance or an object that has lots of tiny holes on its surface such as bone marrow, lotus seed pods, a wasps nest, a sponge etc.

A person suffering from trypophobia usually has two different reaction possibilities at the appearance of the holes. He may either watch it for a while and then think of covering or destroying it, or he would suffer from dizziness at the sight of these holes.

Not a lot is known about the origin and the cause of this condition, which is why, there are no fancy diagnostic tests for it. If looking at the image makes you feel uneasy, you may be a trypophobe too!

It is believed that cognitive behavioral therapy, neurolinguistic programming and other psychological therapies could help treat patients suffering from trypophobia.

Since most phobias are based on a deep-rooted emotional problem, behavioral therapy, hypnotherapy and counseling can prove to be effective in treating people suffering from trypophobia.

Fear is only as deep as the mind allows a Japanese proverb sums it all.

Latest Publications and Research on Trypophobia

Are you sure that if we keep looking at the pictures [tripophobia] we can have that GROSS!tiny hole illness

Nomophobia - No Mobile Phone Phobia
Nomophobia is the fear of being out of mobile phone contact. The term was coined by the Great Britain Post Office while conducting a survey on the anxieties and difficulties of mobile phone users.
READ MORE 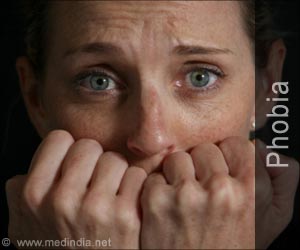 Quiz on Phobia
We have seen "strange" behavior in some people with whom we interact and we have been, often, baffled by their strangeness. Many of these individuals suffer from, what is commonly termed as, "phobias". Let us take a look at some common phobias and ...
READ MORE

Dental Phobia
Dental phobia can cause such intense traumatic anxiety that a patient may even cancel a dental visit, according to a survey.
READ MORE

Phobias
A phobia is an irrational and exaggerated fear of an object or a situation that in reality, poses little or no actual danger.
READ MORE
Sign up for Wellness Consult a Doctor Sign up for Selfcare