Transient Ischemic Attack is a mini stroke caused due to interruption in the blood supply to the brain leading to symptoms which last for a short time.

The consequence of a brief interrupted blood supply to the brain is called a Transient Ischemic Attack. It is also called a warning stroke or a mini stroke. 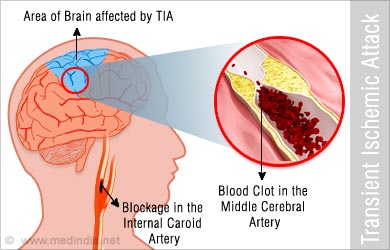 The brain requires a constant supply of glucose and oxygen which is delivered by the blood. The brain accounts for 1-2 % of the body weight, receives 15% of the cardiac output and accounts for 20% of the total body oxygen consumption. It can be deprived of oxygen by -

Transient ischemic attacks are episodes of stroke symptoms that last very briefly. They last for less than 24 hours, though most of them last less than one hour.

The causes of transient ischemic attack are the causes of stroke too, but they may also herald stroke. Hence, they need to be considered as a medical emergency and addressed urgently.

In a transient ischemic attack, the blocked vessel opens up and blood supply is restored. When blood flow is restored quickly, the patient experiences only transient symptoms.

It is prudent to hospitalise the patient, investigate and start the requisite medication to avoid a full blown stroke.

Treatment depends on the cause, correction of the modifiable risk factors, lifestyle changes and steps to prevent a stroke.

Brilliant Human Brain - Animation The most amazing and complex organ in the entire universe, the human brain continues to remain an enigma.

Dizziness Symptom Evaluation The different types of dizziness can be differentiated based on clinical symptoms and tests conducted on the patients.

Pulmonary Embolism and Deep Vein Thrombosis Deep vein thrombosis (DVT) is a condition where blood clots develop usually in the deep veins of the legs. Pulmonary embolism (PE) occurs when these clots break away and block the pulmonary artery.

Deep Vein Thrombosis A blood clot (thrombus) in the deep venous system of the leg leads to deep vein thrombosis (DVT). DVT is a major cause of morbidity and mortality.

How to Deal with a Stroke Stroke is a brain attack, which occurs when the blood supply to the brain is interrupted. It affects all age groups; according to the WHO, 15 million people are affected by stroke annually.

Beauty Parlor Stroke Syndrome Beauty parlor stroke syndrome is a form of vertebrobasilar insufficiency that causes symptoms of mild to severe stroke after a hair wash in a beauty parlor.