Shaped like a butterfly she sits within the neck, thats what an anonymous poet wrote about the thyroid gland. but it can become cancerous and spread to other areas of the body, hence early diagnosis of the symptoms, its risk factor are important for the success of its treatment.

Thyroid cancer has become more common in recent years, and is one of the commonest types of cancers that arise in the endocrine system. An individual of any age group can be affected, thus even children less than 10 years may become victims. Women are three times at a higher risk to get the cancer.

Surveys have discovered "a belt of thyroid cancer" in women in coastal districts of Kerala, Karnataka, and Goa.

The cancerous cells pile up forming a growth or tumour. In the case of a thyroid, the preferred term for this growth is nodule.

Fortunately 90 percent of thyroid nodules are benign. That is they rarely pose threat to life, dont spread to other parts of the body, and do not usually need to be removed. This is not the case when it comes to malignancy. Intervention is called for when a nodule is branded malignant.

Cancer cells are naughty students that never restrict themselves to their allotted seats. They run about. The spread is referred to as metastasis. They travel through blood vessels, lymph vessels (tubes that carry lymph and white blood cells) to other parts of the body.

The lymph nodes (rounded masses of tissues located along the lymph vessels), lungs and bones are the favourite destinations for the cancer cells of thyroid.

ANATOMY AND PHYSIOLOGY The thyroid is a gland at the front of your neck beneath your voice box (Larynx). A healthy thyroid usually cannot be felt through the skin. The 25-30gm weighing butterfly has two wings called lobes connected by an isthmus. 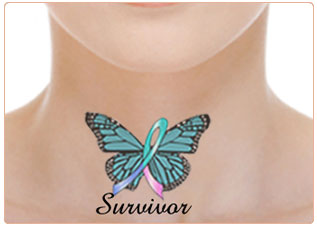 The thyroid is a vital member that affects the heart rate, blood pressure, body temperature, and weight. To do these, the gland secretes a hormone (a chemical) called Thyroxin. The thyroid follicular cells are responsible are the chef masters producing it. In addition there are C cells in the thyroid which makes another hormone called Calcitonin. It plays a tiny role in the maintenance of healthy Calcium levels in the body (the major players are the four Parathyroid glands located on the surface, behind the thyroid).

Just like any other organ, the thyroid is made up of tissues, which in turn are made up of the building blocks called cells. The lifecycle of a cell is usually systematic. A perfect harmony is usually in play. There are times though when chaos arise. Things go wrong, cells multiply at abnormal rates, and old cells turn reluctant to imbibe death. Thus walks in cancer, the deadly crab.

Thyroid antithyroglobulin antibody
Antibodies to thyroglobulin is detected in 70% of cases.Haemagglutination test is carried out

Quiz on Thyroid
Feeling tired or depressed is a common enough complaint, particularly among women. Paying attention to the thyroid might do them a world of good. This quiz on the thyroid is intended to educate those who want to learn ...

Thyroid Storm/Thyrotoxic Crisis
Thyroid storm is a complication of hyperthyroidism or overactive thyroid. Untreated thyrotoxicosis can result in multi-organ failure.

Drug - Food Interactions Find a Hospital The Essence of Yoga Find a Doctor Turmeric Powder - Health Benefits, Uses & Side Effects Iron Intake Calculator Selfie Addiction Calculator Post-Nasal Drip Diaphragmatic Hernia Blood - Sugar Chart
This site uses cookies to deliver our services. By using our site, you acknowledge that you have read and understand our Cookie Policy, Privacy Policy, and our Terms of Use