A person with testicular cancer may have a testicle that is three times its original size. The greatest risk factor is undescended testes. Testicular cancer has an amazing cure rate, if detected early.

Testicular cancer is a type of cancer that affects the testicles (or testes) which are the sperm-producing part of the male reproductive system.

The testes, in the human male, are two in number and are located just below the penis, in a pouchlike structure, called the scrotum. They are responsible for storing the male gametes - sperms, and also play an active role in the production of the male hormone, called testosterone. 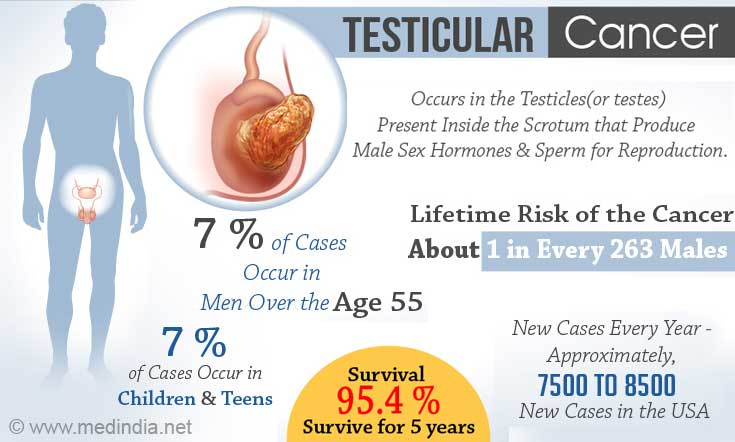 The vast majority of testicular cancers are Germ Cell Tumors, which comprises of two subtypes-Seminomas and Teratomas. Younger patients have a greater chance of developing seminomas while the older men are inclined to develop teratomas.

Unlike other cancers, the chances of developing testicular cancer does not increase with age. It occurs mostly in men who are between 25-45 years of age. The occurrence pattern follows three peaks in a male's lifetime:

In younger men, germ cell tumors of the testes are the most common.

Testicular cancer occurs more commonly in white males and is rare in men of Asian or African origin, although the frequency in the latter is on the increase. Scandinavia, Germany, and New Zealand report the highest incidence. They account for 1% of all malignant tumors.

No environmental agent has been conclusively implicated in the development of testicular cancer. Undescended testes (Cryptorchidism), a congenital defect, is the most common risk factor. It increases the risk by 14 to 48 times the normal expected incidence.

A pain-free testicular mass is the most common presenting symptom. A person with the cancer may have a testicle that is three times the original size. Concurrently this may lead to a shrinking in the size of the other testicle as the tumor feeds on the scrotal blood supply.

Not all the testicular lumps are tumors; many other conditions, such as a tense hydrocele, hematocele, epididymitis, and varicocele are capable of mimicking testicular cancer. In 25% of the patients the diagnosis of the tumor is missed leading to a delay in treatment.

Testicular cancer has an amazing cure rate, especially if detected early. This has been made possible by improvements in the adjuvant (preventive) therapy which comprises of a combination of chemotherapy, radiation and careful watching after a surgery. Doctors recommend regular self-examination for early detection.

A person who has testicular cancer is at risk of developing secondary cancers such as germ cell tumors in the contra lateral testis, leukemias, GI malignancies, melanoma, soft-tissue sarcoma, and genitourinary cancers.

FOR BEST SOLUTIONS ON ANY HEALTH CARE PROBLEMS.

A testicular tumour is caused by cells dividing uncontrollably. They can sometimes spread to other parts of your body through the bloodstream or lymph system.Testicular cancer can spread to the lymph nodes , for example in your abdomen , or form tumours in the lungs or other organs. The spread of cancer is called metastasis.

Invitro Fertilisation - Animation
During IVF fertilization takes place invitro, in an incubated petri dish. The resulting embryo is transferred back to the uterus on Day 3 at the 6-8 cell stage. Sometimes the embryo transfer in done at the blastocyst stage on Day 5. The embryo is ...

Ovarian Cancer | Cancer in the Ovaries - Causes, Symptoms, Treatment & Prevention
Ovarian cancer affects both the ovaries and is referred to as the 'silent killer' as the symptoms go unnoticed until the disease advances.

Cisplatin
This medication is a platinum-based chemotherapy agent, prescribed for ovarian cancer, bladder cancer and metastatic testicular tumors either alone or with other ...

Testicular Cancer - Top 10 facts
Testicular cancer is a type of cancer that affects the testicles (or testes) which are the sperm-producing part of the male reproductive system.

Tumor Markers For Cancer Diagnosis and Prognosis
An ideal tumor marker for a cancer should be specific to that cancer and not generate false positive results.

Orchidopexy (Open Surgery) for Undescended Testes - Animation
Orchidopexy or orchiopexy is the term used for surgical correction for an Undescended Testes in a male child. The testis is brought down and fixed to the bottom of the scrotum to make it function normally and avoid any cancerous changes.

Quiz on Testicular Cancer
Testicular cancer affects one or both testicles (also called testes or gonads). Testicles are a pair of male sex organs that produce and store sperm. Testicles are located under the penis in a sac-like pouch called the ...

Testicular Biopsy
In a testicular biopsy, a small bit of testicular tissue is removed from the testes and examined microscopically for any evidence of disease.

Orchidectomy - Surgical Procedure
Orchidectomy is a surgical operation where one or both the testicles (male sex organs) are removed, most commonly done for cancer of the testes.
Sign up for Wellness Consult a Doctor Sign up for Selfcare
Advertisement
Health Topics A - Z
A B C D E F G H I J K L M N O P Q R S T U V W X Y Z