Symptoms of Ebola include fever and body pain, but quickly progress to severe distress and ultimately shock.

A patient with Ebola viral infection presents with the following features: 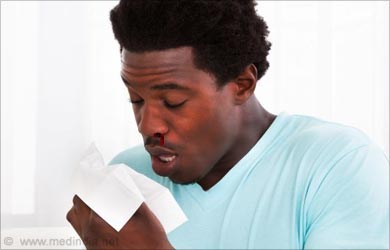 Sometimes the symptoms present as severe headaches, confusion, depression or agitation, seizures or coma indicating that the involvement of central nervous system.

<< About
Diagnosis of Ebola Virus Disease >>

African Children Vulnerable To Sickle-Cell Disease African children are perilously vulnerable to the sickle-cell disease, a blood disorder that increases the risk of infectious diseases and early death.

Ebola Claims the Lives of Five in Liberia As neighboring Guinea battled an outbreak of virus which killed dozens, five patients in Liberia have died of suspected Ebola fever, the government said Monday.

Amoebic Dysentery Amoebic dysentery or amoebiasis is an infection of the intestine that causes diarrhoea most frequently along with other causes.

Congo Fever Crimean-Congo Hemorrhagic fever (CCHF) is a viral disease that affects people who are bitten by infected ticks or those in direct contact with blood or tissues of infected animals or patients.

Worst Outbreak of Deadly Virus Leaves Guinea's Ebola Victims Waiting for Death Victims of Ebola, one of the deadliest viruses known to mankind wait listlessly for the merciful release of death, isolated from the outside world in a medical center in Ebola-hit Guinea.

Deadly Ebola Epidemic Now a 'Regional Threat' The widespread Ebola epidemic which killed dozens in the southern forests has now spread to the port city has now put Conakry on high alert Friday.

Morocco Gets Alert After Ebola Outbreak in Guinea Extra health screening measures announced by Morocco on Tuesday at entry points to the country, especially at Casablanca airport, after the outbreak of the deadly Ebola epidemic in Guinea.