Swine influenza or 'Swine flu' is a type of influenza caused by a new strain of the H1N1 Type A influenza virus that has originated from the pigs but transmitted mostly from human to human.

During the 1918 flu pandemic, pigs and humans became sick and it was then that the connection came to be clearly noticed. For the next 60 years, H1N1 had a unique dominance as the cause of swine flu. Between 1997 and 2002, influenza-causing new strains emerged in North America, some of which comprised of reassorted genes derived from human, swine and avian viruses. These strains of viruses have grown to be the major cause of swine flu in Northern America. 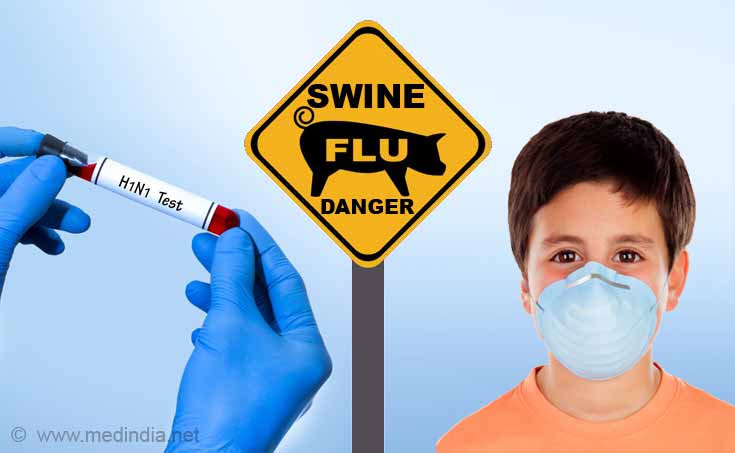 There was a massive effort at vaccination after the 1918 pandemic but it was plagued by reports of developing a neurological condition that leads to weakness of muscles, called Guillain-Barre syndrome, that sometimes had fatal outcomes.

The major flu outbreaks in the world have included the Spanish Flu, Asian flu and the Hong Kong Flu.

Pigs are unique in that they can act as hosts for strains of influenza virus that infect three different species- humans, birds and needless to say, pigs! These strains of viruses exchange their genes, while in the pig, to give rise to new and dangerous combination of viral strains. In China and in Vietnam the avian influenza virus H3N2 is also found in pigs. The avian strain H5N1 has also been detected in pigs in China. This has resulted in fears over a new strain of virus against which the human race has no immunity and can, therefore, cause innumerable deaths. The swine population becomes a potent reservoir of influenza viruses which can bid their time and attack humans when the latters immunity is low.

It must be noted that direct transmission from pigs to humans is extremely rare and that only 12 cases have been reported in the U.S.A since 2005. Transmission of SIV from the pigs to humans can however result in the formation of antibodies against the virus resulting in a condition called zoonosis.

The recent 2009 flu outbreak is due to a new strain of subtype H1N1 not previously reported in pigs. Analysis has revealed that two strains of the subtype H1N1 are involved in the formation of this new strain . The origin of this new strain is still being investigated. It is alleged to have evolved in the eggs that scientists use to develop vaccines. But what makes it potent is that it is not a zoonotic infection but a human to human transmittable disease.

There has been a global preparedness to tackle the swine flu thanks to the measures taken against avian flu (or bird flu) that affected several parts of the world. US President Barack Obama has said We are closely monitoring the emerging cases of swine flu in the United States, and this is, obviously, a cause for concern and requires a heightened state of alert. But its not a cause for alarm.

The World Health Organisation issued a statement that there is currently no vaccine for checking swine flu and it would take not less than six months to develop such a vaccine. The vaccine is reported to be ready by June 2009.

Swine Flu Or Pig Flu Facts
Is the world in the grip of its first influenza pandemic in forty years? It definitely seems so! The current swine flu or pig flu disaster traces its origin to the badly- hit State of Mexico.

Quiz Yourself on Swine flu
Swine flu is the infection of the influenza virus, H1N1, which infects the respiratory tract of pigs. The virus then mutates to become easily transmitted to humans. Symptoms of swine flu are similar to other influenza infections such as high fever, ...