Schistosomiasis is a parasitic infection caused by trematode worms or blood flukes of genus Schistosoma. It is usually prevalent in the tropical and subtropical countries. According to the World Health Organization (WHO), in 2013, 261 million people sought treatment for schistosomiasis.

Schistosomiasis is frequently observed among poor people with poor access to hygienic sanitation and clean drinking water. Normally, people who come in contact with contaminated freshwater get infected. The contamination occurs when infected individuals urinate or defecate in freshwater and release the parasitic worms into the water. The worms breed within snails or water buffaloes and are released into the freshwater. Individuals who bathe, wash clothes, or swim in the water, get infected when the worms penetrate their skin. Worms may live in humans for a timespan ranging from 5 to 30 years. According to WHO, 90% of infected individuals in the world are in Africa. The transmission of the disease does not occur between humans. 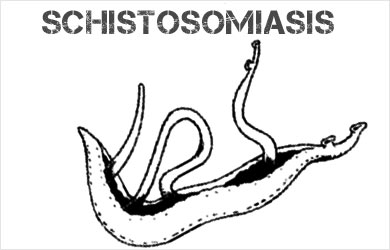 1. Snail Fever Not Just a Problem For Adults, Even Kids Can Get Infected Early

Kids, as young as one year can get infected with schistosomiasis diseases also known as Snail Fever. Regular testing of pre-school children for snail fever can be done to detect and treat the disease early.

What is the Cause of Schistosomiasis?

There are 2 types of schistosomiasis:

The female worms, in humans, release eggs in the blood vessels. Some eggs infect other organs within the body and cause immune reactions. Some eggs are released out of the body through feces or urine where they survive for a week. Eggs released in water, hatch and release larvae. The larvae find snails to penetrate and mature into the next stage called cercaria. During the subsequent 4 to 6 weeks, these cercariae develop within the snails and then move back into the water to survive for 72 hours. During this period, if they come into contact with human skin, they penetrate the body, and develop into the next stage called schistosomule. The schistosomules move into the blood vessels and enter organs of the abdomen. During the next 4 to 6 weeks, these schistosomules mature, mate, and lay eggs. The eggs either remain in the organ, move out into the blood vessels, or are released out of the body to continue their life cycle if they find snails. 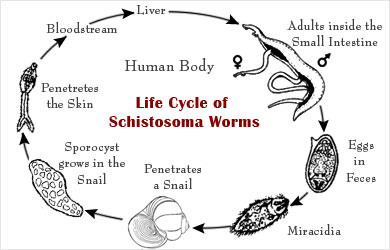 What are the Symptoms and Signs of Schistosomiasis?

The signs and symptoms of schistosomiasis are caused due to reaction of the human body to eggs that are released into the blood vessels. Based on the stage of the infection, the symptoms vary. In the initial stage of infection, the individual may experience itchiness and rash. Eventually, within 1 to 2 months, individuals start to develop muscle ache, fever, chills, and cough. Chronic schistosomiasis hampers the individuals ability to work and may even result in death. Schistosomiasis that affects children results in diminished learning capabilities, anemia, and stunting due to malnutrition. These effects may be reversed with adequate treatment.

Clinical features of urogenital schistosomiasis are as follows:

Clinical features of intestinal schistosomiasis are as follows: 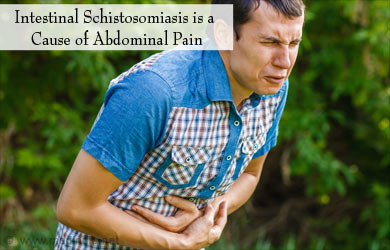 In rare instances, eggs may penetrate the spinal cord or brain and cause paralysis, spinal cord inflammation, and seizures.

How is Schistosomiasis diagnosed?

Diagnosis of schistosomiasis is based on:

How is Schistosomiasis treated?

The only safe recommended treatment for schistosomiasis is praziquantel. It is a low-cost drug that is effective in treating all forms of schistosomiasis. It prevents the disease from developing into a chronic condition especially when treated in the early stages. A recent study indicated that targeting an enzyme glutathione reductase in Schistosoma mansoni could be effective in treating the condition. Another study has reported the effectiveness of breeding prawns in infected freshwater regions since they consume snails. This prevents the transmission of the parasites since prawns are not natural hosts for the parasite.

Schistosomiasis is observed in certain high-risk groups in different countries. Travelers should take necessary precautions when present in these regions. Drinking water should be boiled before consumption. Bathwater should also be boiled before use. Individuals should avoid swimming in freshwater ponds. Chlorinated swimming pools or the open sea are safe places to wade or swim in endemic regions. In the event of contact with contaminated water, individuals may dry themselves vigorously with a towel to prevent the penetration of the parasites. However, this technique may not completely avoid the risk of contamination. 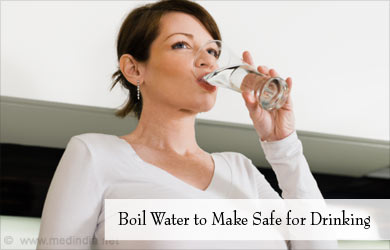 Groups at risk of schistosomiasis should be regularly treated with praziquantel. Such groups should be monitored periodically for infection. In high-risk areas, individuals should be treated on an annual basis. High-risk groups, include individuals whose profession involves contact with water, such as farmers, women doing laundry in freshwater bodies, fishermen, and irrigation laborers. School children and other individuals living in high-risk endemic regions also fall in the high-risk group.

Individuals should avoid contact with contaminated water bodies. They should have access to safe, drinking water. Improved sanitation must be practiced. Individuals at risk should be monitored and treated at regular intervals.

Latest Publications and Research on Schistosomiasis

When Drugs Fail to Treat, Prawns Play Savior to People Suffering from Schistosomiasis
Spread of schistosomiasis, a deadly parasitic disease that can cause anemia, infertility, and other illnesses, can be prevented by freshwater prawns.
Sign up for Wellness Consult a Doctor Sign up for Selfcare
Advertisement
Health Topics A - Z
A B C D E F G H I J K L M N O P Q R S T U V W X Y Z