Tests are done to find out if cancer cells are confined to the salivary gland or spread to other parts of the body. This process is referred to as staging. Based on the extent, the disease is staged into four stages.

Other factors that determine the prognosis include:

Treatment modalities differ according to the type, size and stage of salivary gland cancer. The patients general health condition is also considered. Treatment usually involves surgery, with or without radiation therapy.

If the cancer is small and located in an easy-to-access spot, only a portion of the affected salivary gland is removed. The entire salivary gland is removed in the case of a large tumour. In case the tumour has spread to adjacent lymph nodes (these are nodes which form part of the immune system), then the affected nodes may be removed along the gland.

Other structures like muscles, nerves may also be removed. Damage to nerves may lead to undesirable side effects like numbness and weakness in your ear, face, neck and shoulder. In cases of extensive dissection, reconstructive surgery may be required. This is done by a plastic surgeon.

However, maximum care is taken to avoid damage to nerves.

The best results from radiation therapy are obtained in patients who have stopped smoking prior to the initiation of treatment.

Here drugs are used to stop the growth of cancer cells, either by killing the cells or by preventing them from dividing. When chemotherapy is taken by mouth or injected into a vein or muscle, the drugs enter the bloodstream and can reach cancer cells throughout the body, this is called systemic chemotherapy. In regional chemotherapy drugs are placed directly into the spinal column, an organ, or a body cavity. A combination of anti-cancer drugs may be used. 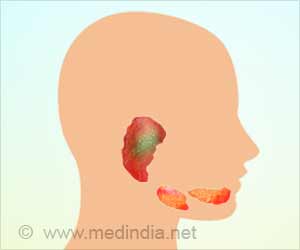