Saint Johns Wort is an attractive plant with lovely yellow flowers. One theory for its name is that as its blossoming season (summer) corresponds with Saint Johns day (tide), it has been named Saint Johns Wort. 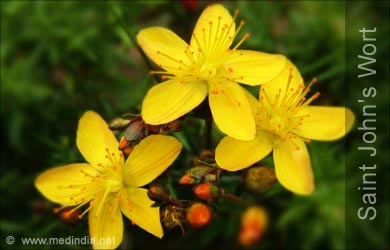 The third legend speaks of Saint John having ingested the plant Hypericum perforatum together with its honey coated insects. Whatever be the legend there is no doubt that this useful plant has been named after Saint John the Baptist.

It is also called Goat Weed, Klamath Weed, Tipton Weed, Millepertuis, Chasse- Diable, Herb de Saint Jean, Piqures, Herbes aux Brulures, Troucherons, Barbe and Mille Trous. Its Latin name is Hypericum perforatum. It is a perennial plant and is considered a weed. It is a native of Europe and grows in meadows and pastures. It is found growing in Europe, North America, India, Russia, China and Asia Minor. It is found growing in the wild. It has been classified as a weed as it can replace natural ecosystems or even make productive land unproductive. When animals graze on the plant in large amounts it is poisonous.

Although the herb is made up of many chemical compound hypericin and hyperforin are the compounds believed to give it its beneficial effect. According to a study tannins and some flavanoids may also be involved.

Through the centuries Saint Johns Wort was used as a medicinal herb. Today it is still considered as an important and safe natural anti depressant to treat mild forms of depression.

St Johns Wort is available as a standardized extracts in most countries and is sold as an over the counter drug that does not require prescription. Usually it is available in a tablet or capsule form. It is also sold as teabags and tinctures.