Acute (or Adult) respiratory distress syndrome (ARDS) is a condition where the lungs and the blood vessels supplying to the lungs are damaged. The patient presents with following features:

This condition could progress to respiratory failure. 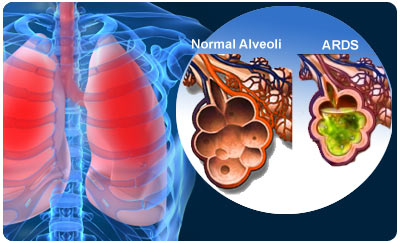 Understanding ARDS - A less severe form of the condition is called acute lung injury (ALI). It could progress to ARDS.

The lung contains millions of air sacs or alveoli that are lined by 2 types of cells  Type I and Type II. Type II cells secrete a fluid called surfactant.The surfactant forms a thin layer on the alveoli and reduces surface tension. The surfactant prevents the alveoli from collapsing while breathing out.

In ARDS, the small blood vessels supplying to the lungs are damaged. This damage leads to collection of fluid rich in proteins in the lungs. Blood vessels show clot formation and scarring. Inflammation plays an important role in damaging lung tissue. The proteins along with the inflammatory cells may form a membrane in the lungs called hyaline membrane.This membrane obstructs the movement of oxygen into the blood. The patient shows decrease in oxygen levels in the blood and breathlessness.

As the condition progresses, the lungs show signs of repair and start producing more surfactant. In some patients, the condition may worsen leading to scarring of the lungs. These patients require ventilation and oxygen over prolonged periods.

Causes of ARDS  It may be caused by a number of disorders that affect the lungs directly or indirectly. Causes of ARDS include sepsis, bacterial pneumonia, severe trauma, multiple transfusions, aspiration of gastric contents, drug overdosage, and post cardiopulmonary bypass surgery.

Diagnosis -The patient is diagnosed using blood gases estimation and imaging studies like chest x-ray and CT scan. The patient is put on a ventilator during treatment. Fluid and nutrition intake are carefully monitored.

Respiratory distress may also occur in premature infants, a condition called Respiratory Distress Syndrome of the Newborn. It occurs due to lack of surfactant in the lungs, leading to collapse. Infants of diabetic mothers, those born during cesarean section or those that suffer from low oxygen during birth may be more prone to the condition. The lungs may show the development of hyaline membrane that prevents exchange of oxygen and carbon dioxide. The baby may suffer from severe complications to the lungs, intestines, eyes, brain and other organs leading to developmental problems.

Treatment - Corticosteroids are administered to the mother before delivery in cases where the baby has high risk of developing this condition. Newborn infants are administered respiratory support using continuous nasal positive airway pressure (CPAP). Surfactant may also be administered into the trachea or windpipe to these newborns.

Poractant Alfa
This medication is a surface-active lipoprotein, prescribed for respiratory distress syndrome (RDS) in premature ...

Gene That Protect Infants from Respiratory Distress Syndrome Isolated
Yale School of Medicine researchers have isolated a gene that helps protect newborns from the most common respiratory cause of infant death in the United Statesrespiratory distress syndrome.

Rapid Shallow Breathing Symptom Evaluation
Rapid shallow breathing / tachypnea is a condition wherein a person takes more breaths per minute than normal. Shallow breathing can be due to several conditions.

Middle East Respiratory Syndrome
MERS, a newly discovered respiratory disease, was recently reported in the Arabian region. MERS is caused by a virus similar to that causing common cold and other respiratory illnesses.

Scrub Typhus
Scrub typhus is a bacterial disease caused by Orientia tsutsugamushi. It is spread to humans by the bites of larvae called chiggers.

Pulmonary Edema
Pulmonary edema or fluid in the lungs is caused by congestive heart failure and several other conditions, including pneumonia, exposure to certain toxins etc.