Renal cell carcinoma is kidney cancer that affects the lining of the kidney tubules. The initial stages of the cancer are asymptomatic in most patients and this makes early management of the disease difficult.

Renal cell carcinoma accounts for about 3% of all adult cancers and is also the most common of kidney cancers (90-95%) affecting mostly men, between the ages 50-70 years. 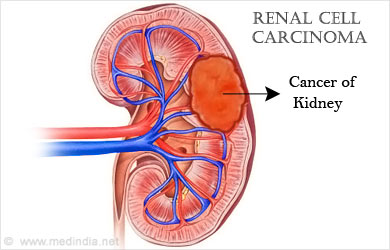 Renal cell carcinoma is commonly seen to affect North Americans and those of Scandinavian ancestry more often than it affects people of Asian or African descent. In the United States, Blacks are more affected than the Whites. Also, the incidence in men is greater than that seen in women. Although the disease is usually detected after age 50, it is seen to occur in young people too who have a family predisposition.

Renal cell carcinoma (RCC) is known for its lack of early symptoms and resistance to treatments such as chemo and radio therapy. However, of late, it has been noticed that these cancers are being detected early and managed through treatments such as thermal ablation, nephron sparing surgeries, with radical nephrectomy (removal of the kidney and surrounding structures) being the gold standard in treating central and large tumors. Also, targeted therapy is being effectively applied in those with metastatic disease, where the cancer has spread to other parts of the body.

1. People With Kidney Cancer Could be at a Real Risk From NSAIDS

Improper sleep may affect patients with chronic kidney diseases, as their health-related quality of life (HRQOL) may get reduced in this process, finds a new study. An adequate amount of sleep is essential for homeostatic regulation (body's ability to control internal environment), while sometimes excess sleep has also been said to harm the Kidney disease patients by causing obesity, diabetes or hypertension.

What are the Causes and Risk Factors of Renal Cell Carcinoma... >>

Quiz on Kidney How healthy are your kidneys? Is it possible to lead healthy lives with just a single kidney? Learn more by taking part in this ...

Quiz on Kidney Stones Kidney stones or calculus produces the most severe form of pain in humans. The pain has often been described to be worse than childbirth, broken bones, gunshot wounds, burns, or surgery. Once you form a kidney stone you are always susceptible to ...

Kidney Stones A kidney stone is a solid mass made up of tiny crystals and may appear in any area of the urinary system.

Kidney Failure due to Melamine Toxicity Adulteration of food with melamine results in the formation of kidney stones and kidney failure, even leading to death.

Importance of Health Screening Tests Health screening, along with a healthy diet and exercise, is necessary for good health and a higher quality of life.

Diet for Kidney stones Diet for kidney stone should comprise of calcium-rich foods, increased fluid intake. Other dietary recommendations depends on the type of kidney stone.

Test Your Knowledge on Kidney Cancer Kidney cancer also called renal cancer is one of the top 10 most common cancers in both men and women. Kidney cancer mostly affects people above 65 years of age. There are four types of kidney cancer namely renal cell carcinoma, transitional cell ...

Nephrectomy - Surgical Procedure Nephrectomy is a surgical procedure in which a whole kidney or a part thereof is removed by a traditional open nephrectomy procedure or by laparoscopic surgery.