Radiation Hazards and its Effects on Human Body-Health Hazards, Prevention

Spontaneous decay of radioactive materials produces radiation. Radiation may be ionizing and non-ionizing. Alpha and beta, gamma and X-rays particles are the most common forms of ionizing radiations. Radioactive iodine is a beta particle released during nuclear plant accidents. The amount of energy the radiations can deposit in a given space varies with each type. Radiations also differ in the power to penetrate. Inside the body the alpha particle will deposit all its energy in a very small volume of tissue while gamma radiation will spread energy over a much larger volume.(1✔ ✔Trusted Source
Radiation: Ionizing

The allowed exposures from specific radioactive sources to the public are limited to 100 mrem. Medical X-rays generally deliver less than 10 mrem.

All kinds of ionizing radiations produce health effects. The damages incurred by different kinds of tissue vary with the type of radiation to which the person is exposed and the means of exposure. Direct exposure to radiation and radiation emitters (radionuclides) can affect the whole body while inhalation or ingestion affects tissues inside the body. The body attempts to repair the damage caused by the radiation. However, at times the damage is so severe and widespread that repair is impossible. Radiations can damage the process of normal cell division leading to cancers. Non-ionizing radiations do not affect at molecular levels. They may cause electrical shocks and burns. Prolonged exposure to microwaves radiation, which is non-ionizing, may cause cataracts.

The thyroid gland is one of the most radiation-sensitive parts of the body, especially in babies and children. Most nuclear accidents release radioactive iodine into the atmosphere. This is absorbed by the body. Absorption of too much radioactive iodine can cause thyroid cancer to develop several years after exposure.(2✔ ✔Trusted Source
Nuclear Radiation and the Thyroid 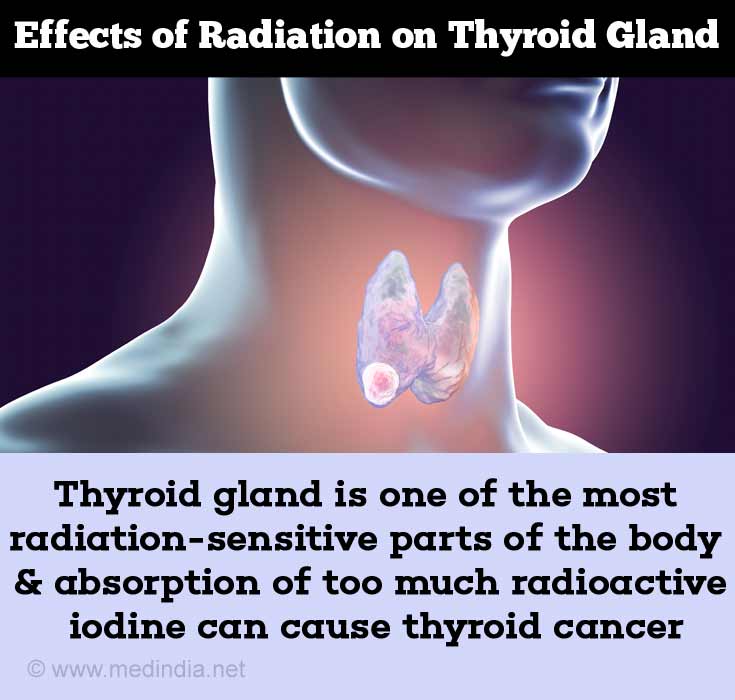 Chemotherapy
''Chemo'' means medicine or ''drug'', ''therapy'' means ''treatment''. Chemotherapy refers to the use of cytotoxic drugs in the treatment of cancer.

Acute Radiation Syndrome
Acute radiation syndrome occurs when a person is exposed to a high dose of external penetrating radiation within a short time.

Rush for Iodine Supplements in Hawaii to Ward Off Radiation from Japan
Hawaiian store owners said people on the Pacific island US state are rushing to get iodide pills to protect against radioactivity from a quake-crippled Japanese nuclear power plant.

UV Radiation Harmful Effects and Benefits - Discovery of UV
William Herschel (1800) and Johann W. Ritter (1801) discovered that there were regions of the light spectrum invisible to the naked human eye.

Cell Phone Radiation and Cancer - Unveiling the Link
Scared after hearing all the harmful effects of cell phone use? Read on to find more about what cell phone radiation actually does and how you can cut down on the exposure.

Fifteen Most Common Chemotherapy Side Effects and Ways to Manage Them
Chemotherapy side effects depend on the chemotherapy treatment as there are varied types of chemotherapy medications. Traditional chemotherapy drugs kill growing cancer cells.
Sign up for Wellness Consult a Doctor Sign up for Selfcare
Advertisement
Health Topics A - Z
A B C D E F G H I J K L M N O P Q R S T U V W X Y Z