Psoriasis is a recurrent and complex inflammatory skin disorder that can have tremendous physical and psychological impact on the sufferer.

Psoriasis is a complex, inflammatory disease which mostly affects the skin and joints. It is however not a contagious disease.

The disease affects both males and females of all age group. Nevertheless it mostly makes its mark for the first time in young individuals between the age of 15-20 years. It is quite unusual for the disease to manifest before the age of 5 years.

The incidence of psoriasis in the western populance is between 2-3% . There are more than 5 million Americans who have psoriasis, and it is estimated that the burden of the disease costs $1.6 to $3.2. billion each year (National Psoriasis Foundation).

"This disease is common, chronic, and costly, both in monetary terms and in quality of life," says Jonathan Wilkin, M.D., Director of the FDAs Division of Dermatologic and Dental Drug Products. The incidence of the disease is quite low in some populations,like the Japanese.

According to a study in India, 60% of the patients had the disease onset before the age of 30 years, with a positive family history in almost 14% of the cases. Skin and scalp were the most commonly affected site.

One of the longest known illness, psoriasis is also one of the most misunderstood, as it was often confused with leprosy.

In 1841 a Viennese dermatologist Ferdinand Von Hebra assigned the word Psoriasis to this disease. The word was coined from the Greek word psora-meaning to itch.

Plaque psoariasis or psoriasis vulgaris is the most common form of the disease. There are typically, red scaly patches - called psoriatic plaques that appear on the skin of affected persons. These plaques are inflammatory sites where the skin rapidly accumulates, thereby, taking on a silvery white appearance. When the scales are removed, the skin underneath is tender and tends to bleed and results in the inflamed patches.

In the case of a normal skin, the production and proliferation of the epidermal layer of the skin takes about 28 days to complete, while in the case of psoriasis, it is restricted to just 4 days. This results in the pile up of immature skin cells - a special feature characteristic to psoriatic lesion .

The severity with which psoriasis occur varies. The plaques may occur as local patches or they may be distributed all over the body. They frequently affect the skin covering the elbows and knees but may also occur on the scalp, finger or toe nails or on the genital area. In some cases, it may cause psoriatic arthritis or inflammation of the joints. This condition is observed in 10-15% of psoriasis patients.

The pathogenesis of psoriasis is yet unknown but it is believed to be immune-mediated. Genes may play a role in its development.

The psychological impact of the disease is inevitable because of the unattractive skin manifestations. Most often the patients are depressed and suffer from very low self-esteem. As such, their lifestyle becomes compromised.

Psoriasis treatment continues to be a challenge due to the recurrent nature of the disease. There is no cure for the disease. 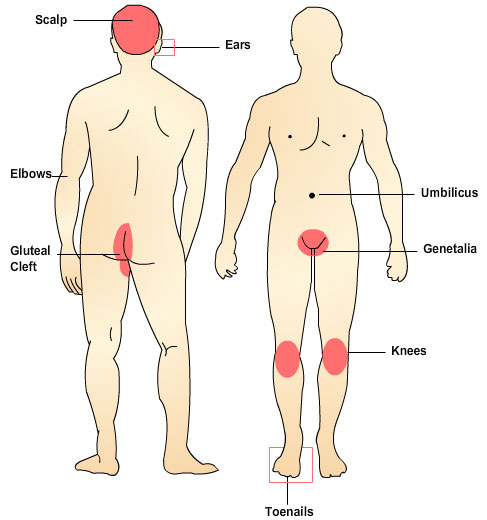 Latest Publications and Research on Psoriasis

Acne
Acne vulgaris, popularly known as 'pimples' or 'zits' is a skin condition affecting most teenagers.

Pityriasis Rosea
Pityriasis rosea is a common skin disease that is not contagious. It manifests as oval-shaped, pink or red rash

Hives
Hives or Urticaria are allergic skin reaction that appear suddenly in clusters or as single bumps on the skin surface and can be itchy.

Cellulitis
Cellulitis is a bacterial infection of the skin and subcutaneous tissues that affects all age groups. Erysipelas, necrotizing fasciitis, and periorbital cellulitis are the 3 types of cellulitis.

Itchy Armpits
Itchy skin, also known as "pruritus", is an irritating, discomforting condition. It affect men and women and often cause a great deal of embarrassment.

Chromoblastomycosis
Chromoblastomycosis, a chronic fungal skin disease, infects the skin and subcutaneous tissue through the opening of a traumatic injury. This dermatiaceous fungal infection responds slowly to fungal treatment.

Diet for Psoriasis
Learn what causes psoriasis, the appropriate diet to follow and the importance of diet in the treatment of this medical condition.

Scalp Psoriasis
Scalp psoriasis, a common skin disorder causes lesions on the scalp. There is no cure for scalp psoriasis and can recur after treatment.

Psoriasis Cure with Homeopathy: Fact or Fiction
Psoriasis, a chronic autoimmune skin disease has phases of exaggeration and remission. Homeopathic remedies are used to treat psoriasis and prevent its recurrence.

Itchy Skin
Itchy skin is an unpleasant skin sensation that urges the person to scratch. The main causes of itchy skin include dandruff, allergic reactions.

Psoriatic Arthritis
Psoriatic arthritis is a kind of autoimmune inflammatory arthritis, which develops in 30 percent of people with the skin condition of psoriasis.

Nail Psoriasis
Psoriasis is an autoimmune disease, which in rare cases can, also affect the nails, making them brittle, soft and painful.

Synovectomy - Surgical Procedure
Synovectomy is a surgical procedure in which a portion or whole of the synovial membrane lining the joint is removed.