Progeric children appear normal at birth but soon become victims of premature ageing. There is no cure for progeria; the disease is progressive and fatal.

Paa is a modern movie with a different concept! In this film, Amitabh Bachchan, in a rare role reversal, plays son to Abhishek Bachchan, his real-life son!

What is new one may ask-after all they are actors playing a part!

In Paa Amitabh dons the role of Auro, a teenager, with Progeria- a disease that has not yet stirred the interest of the visual media. 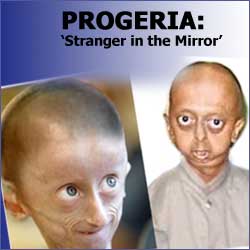 Abhishek Bachchan, meanwhile, has gone overboard emphasizing that the movie is not about Progeria but about Paa- son bonding! But why cant the movie be about Progeria and about drawing the attention of the masses to this ill- known disease? Whatever the intention of the film, the audience would definitely leave the theatres more enlightened (about a less- known illness) than they were, when they arrived to watch the film.

"When I look in the mirror, I see a person like no other person around me. I see someone who is bald, no front teeth, no eyebrows, no eyelashes, and pointed ears. I want people to look at me and see past my looks and see who I really am. Not a freak but a wonderful human being who loves life and his fellow man. Although my looks are so different, I did not choose to look the way I do or to have a life that could be over tomorrow. I am just here to love life."

Latest Publications and Research on Progeria

Diseases Related to Old Age
Ageing is referred to the accumulation of changes that brings a person closer to death.

Basics of Rare Diseases
Rare or orphan diseases are least understood of all chronic diseases. They are more common than projected and kill more people than cancer and HIV together.
Sign up for Wellness Consult a Doctor Sign up for Selfcare
Advertisement
Health Topics A - Z
A B C D E F G H I J K L M N O P Q R S T U V W X Y Z

A-Z Drug Brands in India Drug Side Effects Calculator Post-Nasal Drip Indian Medical Journals How to Reduce School Bag Weight - Simple Tips Nutam (400mg) (Piracetam) Sanatogen Color Blindness Calculator Drug - Food Interactions The Essence of Yoga
This site uses cookies to deliver our services.By using our site, you acknowledge that you have read and understand our Cookie Policy, Privacy Policy, and our Terms of Use  Ok, Got it. Close