Pneumoconiosis is a group of lung diseases caused by inhaled dust particles. It is a disease characterized by fibrosis and caused by the chronic inhalation of mineral dusts, esp. silica and asbestos. 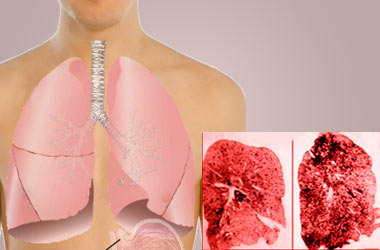 It is seen in specific occupations such as coal mining and construction industries where the concentration of dust particles is very high. Thus it can be considered as occupational lung disease. The most common types of pneumoconiosis include silicosis, asbestosis and coal worker's pneumoconiosis. These are discussed in detail in other sections of the article.

Pneumoconiosis causes inflammation of the lungs. The lung tissue in normal people is very elastic. This allows it to expand and contract while breathing. In the common types of pneumoconiosis, fibrous tissue gets deposited in the lungs, the condition being called fibrosis. Fibrosis tends to stiffen the lung tissue and restrict its expansion. The affected person may develop breathing problems, cancer and may even die due to the condition. It is important to diagnose the condition early, as the patient must be removed from the environment at the earliest. Also, preventive measures should be taken to protect other workers from the disease.

Deaths due to silicosis and coal worker's pneumoconiosis in the United States have reduced during the past few years.

Prevention is the main stay of the treatment. The person at risk should be removed from the site of exposure and wear protective masks in event of exposure to the dust. Affected patients with lung fibrosis will require treatment with oxygen and sometimes Corticosteroids medication may need to be added.

Latest Publications and Research on Pneumoconiosis

Quiz on Lung Cancer
Lung cancer and smoking are closely associated. Lung cancer risk increases with the intensity of smoking. For more details, take this ...

Childhood Asthma - Causes, Symptoms, Diagnosis, Treatment & Prevention
Childhood asthma is a condition that affects airways in children and interferes with their daily activities including play, sports, school and sleep.

Asthma
It's a lung condition characterized by inflammation of the bronchi and constriction of the airways that result in coughing, wheezing or breathlessness. Allergy and other airway irritants can trigger it

Cystic Fibrosis
Cystic fibrosis (CF) is an inherited or genetic disease involving the secretary glands, such as the mucus and sweat glands.

Quiz on Smoking
Approximately half the smokers die due to smoking -related diseases. But it is not just the smokers who are at the receiving end. The passive smokers too, often pay a heavy price. If you still have not 'kicked the butt', learn more horrifying facts ...
Sign up for Wellness Consult a Doctor Sign up for Selfcare
Advertisement
Health Topics A - Z
A B C D E F G H I J K L M N O P Q R S T U V W X Y Z

Blood - Sugar Chart Find a Hospital The Essence of Yoga Indian Medical Journals Turmeric Powder - Health Benefits, Uses & Side Effects Sanatogen Nutam (400mg) (Piracetam) A-Z Drug Brands in India Blood Donation - Recipients Accident and Trauma Care
This site uses cookies to deliver our services.By using our site, you acknowledge that you have read and understand our Cookie Policy, Privacy Policy, and our Terms of Use  Ok, Got it. Close