What is Papillary Thyroid Cancer?

Papillary thyroid cancer is most common in individuals between 25 and 65 years of age. It tends to grow very slowly and often affects only one lobe of the thyroid gland. It is generally treatable with a good prognosis and is rarely fatal.

What are the Variants of Papillary Thyroid Cancer?

What are the Risk factors for Papillary Thyroid Cancer?

Thyroid cancer can occur at any age, but women in their 40s or 50s are 2-3 times more likely to develop thyroid cancer. Anaplastic thyroid cancer is usually diagnosed after the age of 60 years.

What are the Symptoms of Papillary Thyroid Cancer?

Papillary thyroid cancer may not show symptoms in the early stages of the disease. Some of the common symptoms include:

Where does Papillary Thyroid Cancer Spread To?

Papillary thyroid cancer can spread to:

How to Diagnose Papillary Thyroid Cancer?

Tests used in the diagnosis of papillary thyroid cancer include the following:

Physical examination should include an evaluation of size and character of thyroid nodules, and for the presence of neck tenderness that may be present in patients with thyroiditis. Examination of the throat with laryngoscopy should be performed for patients with hoarseness or change in voice. Papillary carcinoma rarely presents as lymph node swelling in the presence of an otherwise normal thyroid gland.

A blood test to check the TSH level should be done to evaluate if the patient is euthyroid (i.e. normal thyroid function), hyperthyroid (i.e. hyperactive thyroid), or hypothyroid (i.e. low thyroid).

Ultrasound is the most important imaging test used to diagnose papillary thyroid cancer. The appearance of the cancer on ultrasound is commonly described as a solid hypoechoic nodule with a well or poorly defined margin, with small foci of punctate calcification. It may also appear as a cyst.

An ultrasound-guided fine needle aspiration biopsy (FNAB) or core biopsy is the investigation of choice for initial diagnosis of thyroid cancer. In this technique, cells are removed from the nodule into the needle (i.e. aspirated) under ultrasound guidance and looked at under the microscope by a specially trained doctor called a cytologist.

An MRI is used to diagnose thyroid tumor invasion into the trachea or esophagus with 100% specificity.

What is the Treatment for Papillary Thyroid Cancer?

Surgery is the most commonly used treatment option for treating thyroid cancers.

Isthmusectomy is another standard surgical technique which is a safe alternative to thyroid lobectomy in patients who have nodules confined to the isthmus and pyramidal lobe in the central part of the thyroid gland. It minimizes potential damage to the recurrent laryngeal nerves and parathyroid glands.

A total thyroidectomy may be needed in some patients.

The affected lymph nodes may also be removed during the surgery.

Radioactive iodine can also be used to destroy the cancer tissue remaining after surgery. In order to stimulate the intracellular uptake of isotope, the TSH (Thyroid Stimulating Hormone) concentration should be at least as high as 30 mU/L. There are two methods for achieving this level. The traditional method requires the patient to withdraw from thyroid hormone replacement over 46 weeks whereas in newer method recombinant human TSH (rhTSH) is administered in the form of intramuscular injections on two consecutive days followed by radioactive iodine on the third day. The benefit of this method is that the patient does not experience an extended period of hypothyroidism as with hormone withdrawal.

Patients treated with thyroidectomy or radioactive iodine may require replacement of thyroid hormone with medications following the treatment. 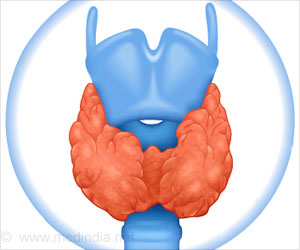 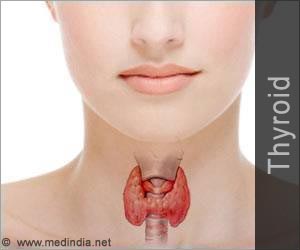 Quiz on Thyroid
Feeling tired or depressed is a common enough complaint, particularly among women. Paying attention to the thyroid might do them a world of good. This quiz on the thyroid is intended to educate those who want to learn ...
READ MORE

Thyroid Cancer
"Shaped like a butterfly she sits within the neck," that's what an anonymous poet wrote about the thyroid gland but it can become cancerous and spread to other parts.
READ MORE
Sign up for Wellness Consult a Doctor Sign up for Selfcare