Paired donor exchange Kidney transplantation is a process in which unrelated kidney donors are matched to recipients so that compatible transplants can be performed. For example, in the case where a person needing a kidney transplant has identified a donor (e.g., a family member or spouse) but the two are incompatible (say, because they have different blood types), it is possible to identify another such incompatible couple where, by swapping donors, the blood types are compatible.

Then, two compatible transplants can be successfully performed through this kidney swap, or paired donor exchange.(1✔ ✔Trusted Source
Past, present and future of kidney paired donation transplantation in India

Go to source) This practice is becoming widely performed in the US and is beginning to be practiced in India as well.(2✔ ✔Trusted Source
Increasing access to renal transplantation in India through our single-center kidney paired donation program: a model for the developing world to prevent commercial transplantation 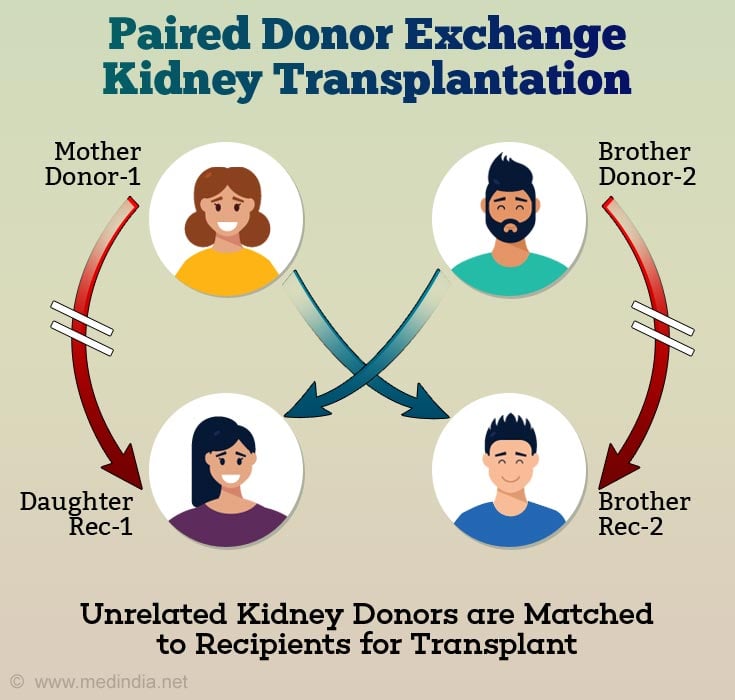 Kidney transplantation is highly successful, with minimal risks to the donor and the recipient and long term survival benefits for the kidney transplant recipient. Living kidney donors are rigorously screened to ensure the absence of any health problems or risk factors for future kidney disease such as high blood pressure or diabetes. They therefore are more healthy than the average person and have longer life expectancies than most people.

Removing one kidney has no long-term health complications: healthy people with one kidney are at no higher risk of developing kidney failure in the future compared to the general population. The risks of the living kidney donor removal surgery (donor nephrectomy) include bleeding, infection, hernia, surgical injury to organs close to the kidney being removed, and death. Dying as a result of donor nephrectomy surgery is extremely rare, but there have been instances in which this has happened. The estimated risk of dying during or as a direct result of surgery is 1 in 10,000 (0.01%). Potential donors must also understand the possibility that the recipients transplanted kidney could fail. 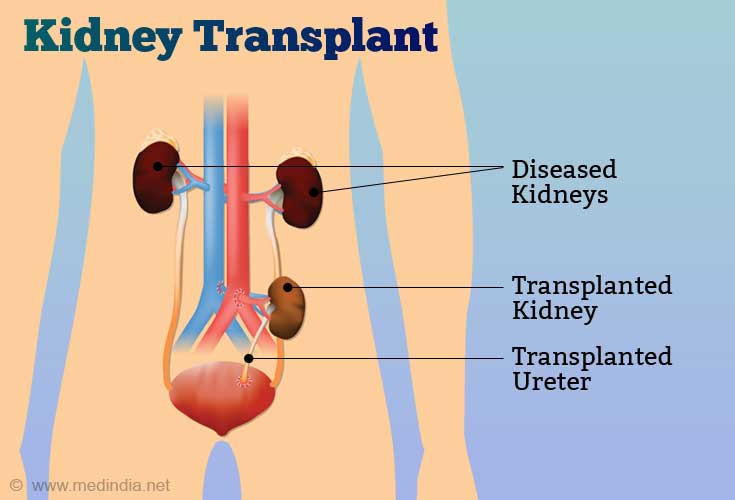 For the kidney recipient, the risks of surgery are also minimal, but higher than the donor surgery because the recipients are chronically ill, often with underlying other diseases such as heart disease or diabetes, and there are risks associated with long-term use of antirejection drugs which must be taken lifelong after transplant. The one-year patient survival rate is 99% and the one-year kidney graft survival rate is 98%. Even after 3 years, these results approach or exceed 90%. The long term survival of transplanted kidneys remains problematic due to our incomplete understanding of the chronic rejection process. After 10 years, 50% of transplant recipients have a functioning kidney.

Since the options of going back on dialysis or even getting another transplant exist, the actual patient survival after 10 years approaches 80%. Undergoing a successful kidney transplant also extends life expectancy compared to people who remain on chronic dialysis. The surgical risks associated with kidney transplant include bleeding, infection, rejection, immediate graft failure requiring resumption of dialysis, heart attack, stroke, and death. Of these, infection is the most common, so constant vigilance must be maintained by both the doctors and the recipient in order to detect and treat infection early and to prevent it with prophylactic medicines. 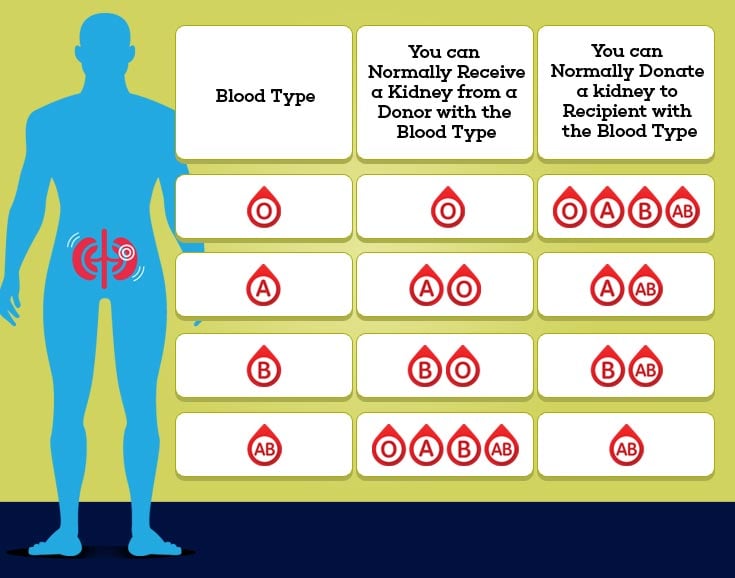 A second important consideration is that the recipient does not have any antibodies (immune cell proteins that fight off foreign organisms or tissues) directed toward the donor. A potential recipient can develop such antibodies after receiving multiple blood transfusions, having many pregnancies (>5), or having had a previous transplant. This process is known as sensitization because the bodys immune system becomes sensitized to a particular foreign protein and is primed to mount an immediate attack against such proteins if they are ever encountered again. So, recipients who are sensitized to their donors would suffer the same fate of hyperacute rejection upon transplant if efforts to minimize or eradicate the recipients circulating antibodies are not performed. Desensitizing recipients prior to transplant (again, using powerful drugs and other expensive therapies as is the case with ABO incompatible transplants) is successful only in a minority of cases in which the level of antibodies is very low.

A final consideration in matching donors with recipients is tissue compatibility, or Human Leukocyte Antigen (HLA) testing. HLAs are proteins present on our cells that distinguish ones own tissues (self) from nonself tissues or invading organisms such as bacteria or viruses. Six different HLAs are tested. The chances of a perfect match in which all 6 HLAs are identical is exceedingly small between unrelated individuals. For siblings, there is a 25% chance of a perfect match (6/6), a 50% chance of a 3/6 match, and a 25% chance of a 0/6 match based on classic Mendelian genetics. Parents and children will always have a 3/6 match and identical twins will have a 6/6 match. Great importance used to be paid to this HLA tissue matching in the past, but now antirejection medicines are so effective that there is little statistical difference in outcomes in donor/recipient pairs with 0/6 up to 5/6 HLA matches. Perfect matches do enjoy longer kidney graft survival times, so priority is given to these pairs when they are available.

In the United States, the Organ Procurement Transplant Network (OPTN) managed by the United Network of Organ Sharing (UNOS) maintains a national database containing details on every patient listed for transplant in the country. This information includes blood type and HLA (tissue) typing. So, the capacity exists to use sophisticated computer algorithms to identify suitable matches between unrelated donor/recipient pairs and thus maximize the efficiency of the paired donor exchange process. Paired donor exchange is therefore one of the most significant advances in transplantation in the past decade.

Unfortunately, for India there are several barriers to completely emmulate the US paired donor exchange system. The Transplant of Human Organs Act (THOA) initially passed in 1994 only allowed living donor transplants to be performed between near relatives (spouse, parents, children, grandparents and grandchildren). The amendment in 2011 to the law, however, allows for swap donation and paired exchange following clearance from the authorization committee of the state. Acceptance of living unrelated transplant in India will be extremely difficult for the time being given the history of black market organ activity in this country.

Another barrier to fully realizing the potential of paired donor exchange. in India is that there currently is no national transplant database equivalent to UNOSs OPTN. There is tremendous political enthusiasm to establish the National Organ and Tissue Transplant Organization (NOTTO) which would include a nationwide transplant database, but until such a system is up and running, paired donor exchange in India will be limited.

A final barrier, and perhaps the most surmountable, is the public and medical professional sentiment towards transplantation in India. Because of the disturbing history of illegal organ trading and also the reality that living donor transplantation is economically driven (i.e., only those who can afford transplant benefit from this therapy given the paucity of deceased donor transplant activity in India at this point), many Indian people and even doctors look upon transplant with great suspicion. This environment is not conducive to considering the notion of sharing your kidney with a complete stranger even if it means helping your loved one in the end. Public and professional attitudes towards transplant and organ donation can only change with establishing transparent and accountable systems, as well as honest and effective educational campaigns.

Despite these challenges, there are several anecdotal and single center reports in the medical literature of successful paired donor exchanges in India.(3✔ ✔Trusted Source
Kidney-Paired Donation to Increase Living Donor Kidney Transplantation in India: Guidelines of Indian Society of Organ Transplantation - 2017

Go to source) and existing pharmacologic desensitization protocols. Most importantly, the results are superior because no immunologic barrier has to be overcome with paired donor exchange. As our knowledge of transplant immunology improves, perhaps there will ultimately be a cost effective and clinically equivalent way to desensitize mismatched donor/recipient pairs. But for the moment, encouraging paired donor exchange transplants whenever possible offers the best solution.

Bone Marrow Transplantation
Preferred Term is Hematopoietic stem cell transplantation. In this stem cell from bone marrow are injected into a recipient after treating them with growth factor.

Kidney Transplantation
Since the early times, the novel idea of transplanting tissues and other body parts from one organism to the other has captured the imagination of successive generations.

Quiz on Kidney
How healthy are your kidneys? Is it possible to lead healthy lives with just a single kidney? Learn more by taking part in this ...

Slide Multimedia Animation on Surgical Removal of Kidney or Nephrectomy - Animation
Graphical explanation of removal of kidney. This is sometimes necessary for a kidney that stops functioning or if it has a cancer in it. It is a major operation and requires hospitalization for 5 to 7 days.
Sign up for Wellness Consult a Doctor Sign up for Selfcare
Advertisement
Health Topics A - Z
A B C D E F G H I J K L M N O P Q R S T U V W X Y Z