Otosclerosis is a disease of the middle ear, but sometimes spreads to the inner ear also, oto meaning of the ear and sclerosis meaning abnormal hardening of body tissue. Bone development and remodeling is a lifelong process, where a bone tissue renews its own old tissues with new ones. If this remodeling process becomes abnormal at the foot of the stapes bone, the ability of sound traveling from middle ear to the inner ear is disrupted. 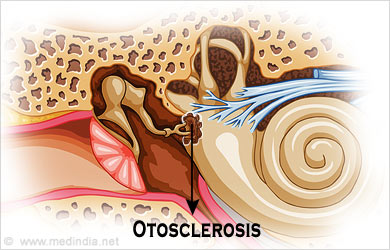 Sounds are transmitted from the external surrounding through the ear canal and then to the middle ear. The eardrum receives the sounds and vibrates; these vibrations are passed to the inner ear via three little bones of the middle ear. The three bones are called maleus, incus and stapes. The malleus is attached to the ear drum, and the stapes is attached to a membrane that encloses the inner ear. The incus connects the malleus to the stapes. The vibrations are transmitted to the fluid in the cochlea, which in turn moves to stimulate the delicate nerve endings of the hair cells, or sound receptor cells. The hair cells transmit these signals to the brain via the auditory nerve.

The stapes is shaped like a stirrup with both ends on a footplate. Otosclerosis usually affects the stapes bone, which rests its footplate exactly on the oval shaped membrane that covers the inner ear. Abnormal remodeling or growth of bone tissue at the footplate fixes it to the membrane making the movement difficult. This dampens the transmission of the sounds to the inner ear. The growth of the abnormal bone is usually very slow, and can spread to the bony shell of the cochlea and affect the nerves within.

If the growth is limited to the footplate of the stapes, fixing it to the membrane of the oval window, then the condition is called stapedial otosclerosis. The resultant hearing loss is conductive in nature. In long standing case of otosclerotic fixation of the stapes, the disease progresses the otic capsule, resulting in sensorineural hearing loss. The vestibular system is also affected in this process and may cause dizziness or vertigo. 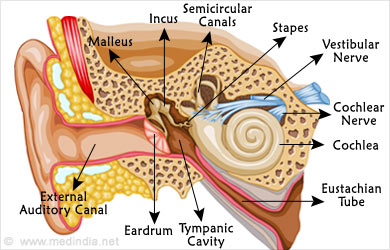 Although the exact cause of otosclerosis is not yet known, there have been some theories suggesting the involvement of various factors.

Hearing loss, although very gradual, is the usual symptom of otosclerosis. Persons with such a hearing loss may first notice that their ability to discriminate speech in noisy surroundings is difficult. Tinnitus, a sensation of ringing or buzzing sounds in the ears is another prominent symptom of otosclerosis. If the condition has spread to the inner ear and the vestibular system, dizziness or vertigo could occur.

When the hearing loss is conductive in nature, the patient perceives his or her own voice as louder that actually is and so they speak in a low volume. With the involvement of the cochlea, the voice may become louder as they would not be able to hear themselves. 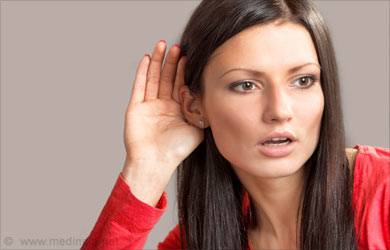 Otosclerosis is diagnosed by an ENT specialist and audiologist after various investigations. Some of the diseases of the ear and other health problems have to be ruled out. Tests on hearing and balance functions have to be performed to confirm otosclerosis and its severity. Audiogram typically shows conductive hearing loss or mixed hearing loss. Typical audiogram indicating otosclerosis is indicated by higher hearing threshold at 2000 Hz, in bone conduction. Tympanometry is also performed to assess the function and mobility of the eardrum and the ossicles.

Conservative treatment for otosclerosis is not to interfere with the growth and getting regular hearing checkups to monitor any worsening of hearing.

Medical treatment involves including a dietary supplement of sodium fluoride. About 20-120mg of fluoride a day is prescribed and the efficacy of the treatment is evaluated after 2 years with repeat hearing and balance tests. If the disease is found to be stable, then the patient can go for a life-long maintenance dose of about 25 mg fluoride a day. However, treatment of otosclerosis with fluoride is not yet validated.

Surgical treatment of otosclerosis is the most effective treatment. A successful stapedectomy may restore hearing in almost 80% cases, slight improvement in about 10% and worsening of hearing in 5% cases. If the inner ear is already damaged, the hearing capacity can be restored only to the extent of correction done in the middle ear structures. 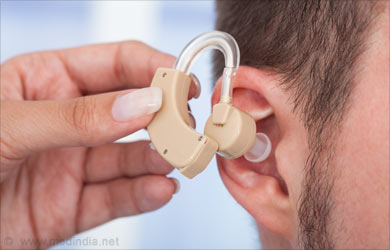 Hearing aids are suggested to patients with surgical contraindications and to those who are not willing to go for surgery. However, otosclerosis being a progressive disease, a stapedectomy may eventually be required for a definitive treatment.

Initially, stapedectomy operation involved making a relatively large hole through the base of the stapes. Modern stapedectomy, a surgery done under the microscope, can be performed under local or general anesthesia, though the latter is more commonly used. 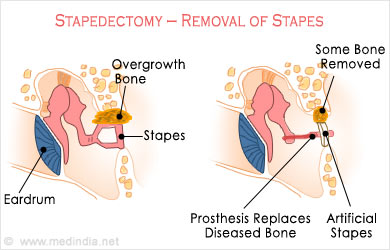 The eardrum is turned forwards and extremely fine instruments are used to remove the upper part of the stapes. A small hole is made through the footplate that is fixed to the entrance of the inner ear. A prosthetic stapes is inserted into this hole and connected to the incus. The ear drum is returned to its original position and the area is covered with adequate dressing.

Improvement in hearing can be noticed only after 3 to 6 weeks as bruising and swelling need to subside and the dressing needs to be removed. The patient is advised to take complete rest for about two to three weeks and must avoid traveling by flight for several weeks or even months after the surgery.

Menieres disease is a major contraindication of stapedectomy. In young patients, there could be re-ossification of the bone and a repeat surgery might be required.

Latest Publications and Research on Otosclerosis

Which age group people are more prone to otosclerosis??

Audiometry
Audiometry or the hearing test helps to determine the ability of a person to hear various sounds and consequently identify the location of damage in a person with diminished hearing sensitivity.

Hearing Loss in Young Children and Early Intervention
Early identification of hearing loss in infants and young children and treating hearing impairment can go a long way to integrate them into the society of talking people.

Hearing Aids
Hearing aid is an electronic device that helps people with hearing loss to hear more and communicate more effectively. Only 1 out of 5 people benefit from a hearing aid.

Autoimmune Inner Ear Disease
Autoimmune inner ear disease is a condition that causes progressive deterioration of hearing and hearing loss. This is a serious condition that needs prompt medical attention.