What is Otitis Externa?

Otitis externa, also commonly referred as Swimmers Ear, is an inflammatory condition that affects the external ear canal, which is the passage that connects the eardrum to the outer visible ear. The condition is often simply known as swimmers ear because it is in fact rather common among swimmers; frequent exposure to water in swimmers does make the canal more vulnerable to infections and inflammation.

Otitis externa can have various possible causes. It can be misleading to refer to it solely as swimmers ear infection, as it isnt always caused by infection. Here are some of the common causes of otitis externa:

Otitis externa usually begins with mild symptoms that progressively worsen if not treated. Early symptoms of otitis externa include:

The intensity of pain, itching and discomfort increases if the condition is allowed to progress, and the entire ear will appear to be inflamed and red. Fluid discharge from the ear may become bothersome. Hearing is also often affected. Sounds may be muffled and you will most likely experience a sensation of pressure and fullness in the ear.

If treatment is delayed or not followed appropriately, the condition can become severe and you may notice symptoms that include: 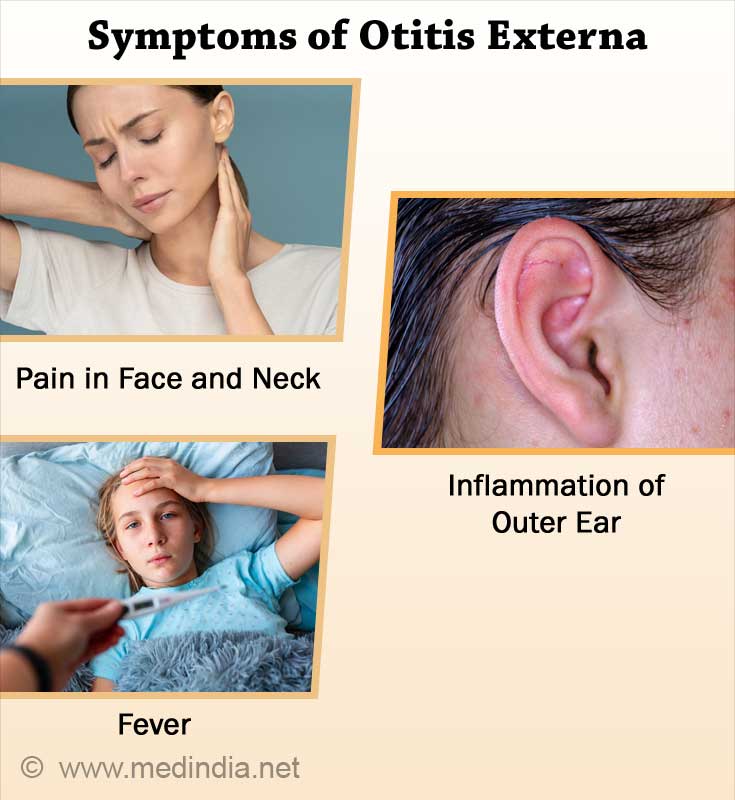 The primary method of diagnosis of otitis externa is through a physical examination. This can cause some discomfort as almost any movement of or contact with the outer ear would cause some pain. This is an important part of the physical examination however, as it will enable your physician to arrive at a diagnosis. An otoscope will be used to examine the eardrum, but this may not be possible because of swelling of the ear canal and because of the presence of discharge and debris.

Culture of the discharge may be sent to a lab for analysis. This could help identify the fungus or one of the bacteria that is responsible.

Otitis externa may resolve without treatment at times, but it could take weeks and there is a risk that it may instead worsen. Treatment for otitis externa is usually quite effective and if followed properly the condition should resolve within just a few days.

There is little risk of complications developing from otitis externa but in rare cases the condition may cause the formation of abscesses in and around the ear. Your doctor may need to drain these pus-filled pockets. Chronic otitis externa could cause a narrowing of the ear canal because of the buildup of thick and dry skin over a period of time. If neglected, it interferes with hearing and could even cause deafness. If treated early, the problem can be resolved easily.

In some cases, the infection could spread to the eardrum. The eardrum may rupture because of the excessive pressure on it, resulting in hearing loss, discharge, pain and tinnitus. Cellulitis, which is a bacterial skin infection, may also develop because of otitis externa. The skin becomes tender, red and painful, but it is something that can be effectively treated with antibiotics.

Malignant otitis externa is a serious condition in which the infection also spreads to the bone of the ear canal, but it is fortunately rare. It is more common in adults, especially among those with weakened immunity as in the case of patients suffering from health conditions like HIV, diabetes, or those undergoing chemotherapy. The condition is not only painful but it may even leave bone exposed in the ear canal. If not treated, this complication can be fatal. However, antibiotics and surgical methods of treatment are extremely effective and the condition can be cured.

Acute Ear Infection
Ear infection is very common in babies and young children. The type of ear discharge depends on the underlying cause.

Swimmer's Ear is Preventable: Expert
If swimmer's ear, or otitis externa, is a concern, prevention and treatment is easier than you think.

Autoimmune Inner Ear Disease
Autoimmune inner ear disease is a condition that causes progressive deterioration of hearing and hearing loss. This is a serious condition that needs prompt medical attention.

Cholesteatoma
Cholesteatoma is a benign cystic growth of the ear located behind the ear drum in the middle ear. It consists of dead skin cells and is pearly white in color. It occurs mostly as a complication of repeated middle ear infections.
Sign up for Wellness Consult a Doctor Sign up for Selfcare
Advertisement
Health Topics A - Z
A B C D E F G H I J K L M N O P Q R S T U V W X Y Z