Transplantation of Organs and Tissues

What is organ and tissue transplantation? 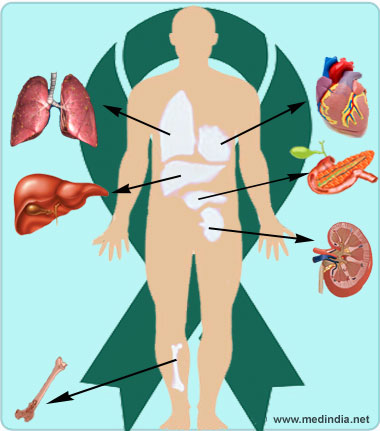 It is only when organs have suffered incurable functional damage that cannot be cured by drugs or any kind of surgical treatment that the are treated by .

What are the types of transplantation?

In a living-related transplantation, a person donates an organ (e.g. one kidney), or part of an organ (e.g. part of liver) to a patient. The person who donates can either be a relative or be emotionally related or be a unrelated donor.

What is transplant rejection?

The first reasonable account of transplantation comes from as early as 2nd century BC by the Indian Ayurveda surgeon Sushruta, who used autografted (a tissue or organ that is transplanted from one part to another of the same body) skin transplantation in nose reconstruction rhinoplasty. However, success or failure of these procedures is not well documented.

In the 16th century, the Italian surgeon Gasparo Tagliacozzi performed successful skin autografts, but he failed consistently with allografts (different donor) offering the first suggestion of rejection mechanism. He came to be known as the father of plastic surgery.

In 1905, the first successful human corneal transplant was performed by Eduard Zirm in Czech Republic.

In 1967, Christiaan Barnard performed the first successful heart transplant in Cape Town, South Africa. Louis Washkansky, the recipient, survived for 18 days. Given below are some other important successful firsts in transplantation history

Latest Publications and Research on Transplantation

Organ Donation/ Transplantation Articles
Information Technology In Healthcare in India and world over has recently seen tremendous advancement and is likely to change the way we practise medicine in times to come.

Cadaver Organ Donation and Transplantation in India
Cadaver organ transplants in India started in 1995 and so far 600 cadaver transplants of kidneys, heart and liver have been done in India, article describes the trails, tribulations and triumphs of the programme.

Aplastic Anemia
Aplastic anemia (AA) is a term that refers to a condition where the body fails to produce enough blood cells.

Brain Death & Organ Transplantation Ethical, Legal & Social Issues
Telemedicine - The Possibilities and Realities of application in India. Health for all by 2020 is possible if telemedicine is used effectively in India

World's First Synthetic Organ Transplant
The world's first transplant of a synthetic windpipe has been successfully carried out by a team of surgeons.

Corneal Transplantation
Corneal transplantation is a surgical procedure to remove damaged cornea and replace it with a healthy cornea from a deceased donor. It is an outpatient procedure and vision is restored gradually.

Daily Calorie Requirements Vent Forte (Theophylline) How to Reduce School Bag Weight - Simple Tips Color Blindness Calculator A-Z Drug Brands in India Selfie Addiction Calculator Accident and Trauma Care Find a Hospital Indian Medical Journals The Essence of Yoga
This site uses cookies to deliver our services.By using our site, you acknowledge that you have read and understand our Cookie Policy, Privacy Policy, and our Terms of Use  Ok, Got it. Close