Mucopolysaccharidosis (MPS) are a group of genetic metabolic disorders that manifest due to the absence or malfunctioning of specific enzymes required to process molecules called glycosaminoglycans.

Glycosaminoglycans are long chains of complex sugar molecules in cells that participate in the formation of bone, cartilage, tendons, cornea, skin and connective tissue. These complex molecules are also found in the fluid lubricating joints. 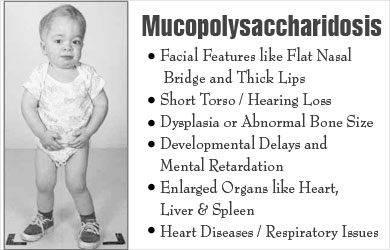 People with MPS do not produce enough of 1 of the 11 enzymes needed to break down glycosaminoglycans, or they produce altered enzyme that is less effective. This leads to glycosaminoglycan buildup in the cells, blood and connective tissue and consequent cellular damage. The cellular damage manifests as symptoms like abnormal facial features and appearance, impaired physical ability, organ malfunctioning and in some cases, cognitive impairments and developmental delay.

What are the Types of MPS?

All the clinical types and subtypes of MPS are inherited in an autosomal recessive pattern with the exception of MPS II, which is X-linked recessive. In an autosomal recessive inheritance pattern, the individual inherits two copies of the defective gene, one from each parent. The gene in this case is located on one of the 22 pairs of chromosomes called autosomes. MPS type II is inherited through the X-chromosome, which is one of the sex chromosomes. Since women have two X-chromosomes, they do not manifest conditions with are X-linked recessive, but can pass on the defective gene to the son, who has only one X-chromosome and therefore manifests the condition.

What are the Symptoms of Mucopolysaccharidoses?

Symptoms may be mild, moderate or severe depending on the type of MPS. All individuals do not present with mental retardation or developmental delays. There is a common cluster of symptoms occurring across clinical types and subtypes of MPS:

How are Mucopolysaccharidoses diagnosed?

Diagnosis of mucopolysaccharidoses is made based on a combination of medical history, physical examination and clinical investigations.

Urine tests indicate the presence of excess mucopolysaccharides. Enzyme assays where cultured cells or blood is tested for enzyme deficiencies is also diagnostic of the specific type of mucopolysaccharidoses. 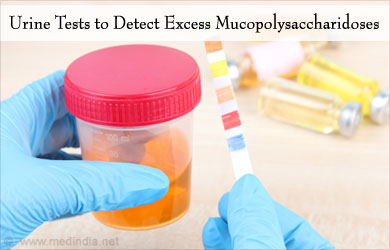 Genetic testing is available to detect carriers of the gene. Pre-natal diagnosis is also available to detect the presence of MPS in the fetus. A procedure known as chorion villi sampling (CVS) is done between the 8th and 10th week of pregnancy. This procedure involves obtaining and testing a micro sample of the placenta.

How are Mucopolysaccharidoses treated?

There is no permanent cure for MPS and treatment is symptomatic.

MPS is treated on a case-to-case basis in providing support for patients. Symptoms are tackled and the overall aim is to keep the individual as healthy and functional as possible. For example, vision impairment can be avoided by corneal surgery to remove a layer of the cloudy cornea. Respiratory infections are treated with antibiotics. 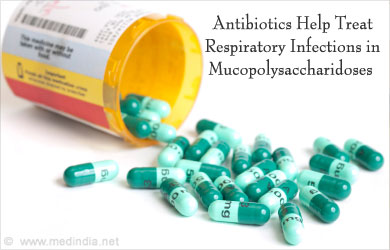 A diet with limited amounts of milk, sugar and dairy products has been helpful in some cases. Nutritional supplements may be given to maintain strength.

Enzyme replacement therapy (ERT) is being used for MPS I, MPS II and MPS VI. This is helpful in reducing pain and neurological symptoms.

Bone marrow transplant (BMT) and umbilical cord blood transplant (UCBT) have not been very successful treating MPS. These procedures also come with a range of other risks like rejection and fatal pneumonia due to suppressed immunity during the procedure.

Latest Publications and Research on Mucopolysaccharidosis

Mucolipidoses
Mucolipidoses (ML) are a group of inborn metabolic disorders due to the accumulation of complex carbohydrates (glycosaminoglycans) and glycolipids in the lysosomes.

Hunter syndrome
Hunter Syndrome is a rare inherited disease in which the breakdown of sugars that build connective tissues is impaired due to the malfunctioning of an enzyme.
Sign up for Wellness Consult a Doctor Sign up for Selfcare
Advertisement
Health Topics A - Z
A B C D E F G H I J K L M N O P Q R S T U V W X Y Z