What is Monogenic Diabetes?

The most common types of diabetes, Type 1 and Type 2 are polygenic, meaning developing from multiple genes. Polygenic forms of diabetes are often genetically inherited and run in families. In most cases of Type 2 diabetes, overeating, lack of physical activity and a poor diet are recognized causes, but such patients also have a strong family history of Type 2 diabetes, suggesting a genetic contribution to the disease as well. In both Type 1 and Type 2 diabetes, individuals present with an elevated blood glucose level (Fasting blood sugar - FBS > 70 mg/dL).

Some forms of monogenic diabetes present with absent or moderate symptoms (For example: MODY that is caused by a mutation in the GCK gene). GCK-MODY usually requires no medical treatment, as normal blood glucose levels can be achieved with dietary and lifestyle changes alone. Other forms of monogenic diabetes present with elevated blood sugar levels that require clinical interventions such as treatment with insulin.

In most forms of monogenic diabetes, the bodys ability to produce insulin (the hormone that helps the body use sugar for energy) is reduced. In a few cases, insulin resistance is presented wherein the body cannot use insulin efficiently.

The correct diagnosis of monogenic diabetes is critical. Since it is often misdiagnosed as Type 1 or Type 2 diabetes, treatment may not be correct. Most children with monogenic diabetes are put on insulin. However, if rightly diagnosed, children can lead quality lives with oral diabetes medications and better blood glucose control though dietary and lifestyle modifications.

What is Neonatal Diabetes Mellitus (NDM)?

NDM is a rare form occurring in only 1 in 100,000 to 500,000 live births. Babies with NDM do not produce sufficient insulin which leads to elevated blood glucose levels. Often NDM is mistaken for Type 1 diabetes which actually occurs later than the first 6 months. The permanent form of NDM is also known as permanent neonatal diabetes mellitus (PNDM). In some cases, the diabetes is transient often disappearing and recurring later in life. This type of NDM is known as transient neonatal diabetes mellitus (TNDM). 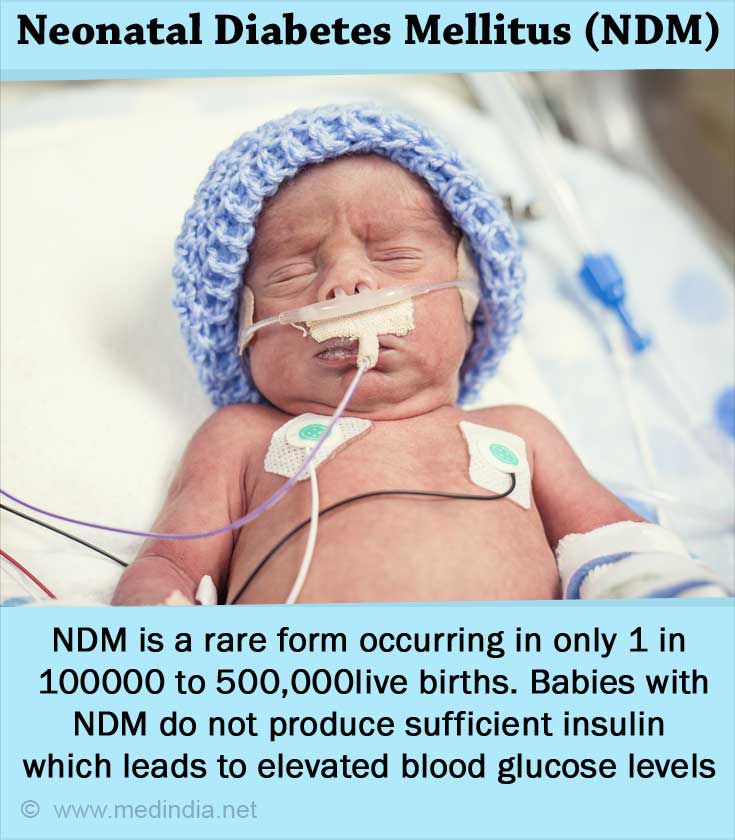 Fetuses with NDM do not grow well and newborns are smaller than the normal newborn with lower birth weight. After birth, the infant may fail to thrive and grow properly. Timely diagnosis and treatment usually improves infant weight and growth. NDM can be diagnosed through elevated glucose in blood or urine.

NDM is attributed to more than 15 genes. Early genetic testing is important because this knowledge can help direct appropriate therapy. For example, one form of NDM involves the ATP-sensitive potassium channel (KATP channel) on the beta cell membrane and this form responds to treatment with high doses of sulfonylureas.

What are the Symptoms of Neonatal Diabetes Mellitus (NDM)?

Some of the symptoms include:

What is the Treatment for Neonatal Diabetes Mellitus (NDM)?

Sulfonylurea tablets are generally used to treat Type 2 diabetes. However, doses 3-4 times higher are also used to treat NDM. In Type 2 diabetes, the sulfonylurea stimulates insulin release developing a rapid response to elevated glucose. In patients with NDM caused by mutations in the KCNJ11 or ABCC8 genes, sulfonylurea enables the pancreas to release insulin in response to food through the hormone GLP-1 which is released by the gut when food is ingested. Sulfonylureas are generally successful in treating NDM caused by mutated KCNJ11 or ABCC8 genes. It is only in rare exceptions that sulfonylureas do not work.

Insulin may sometimes be required in some forms of NDM. Usually infants with TNDM do not require insulin at first and the condition may disappear for a while. If the diabetes recurs later in life, life-long insulin treatment may be required. 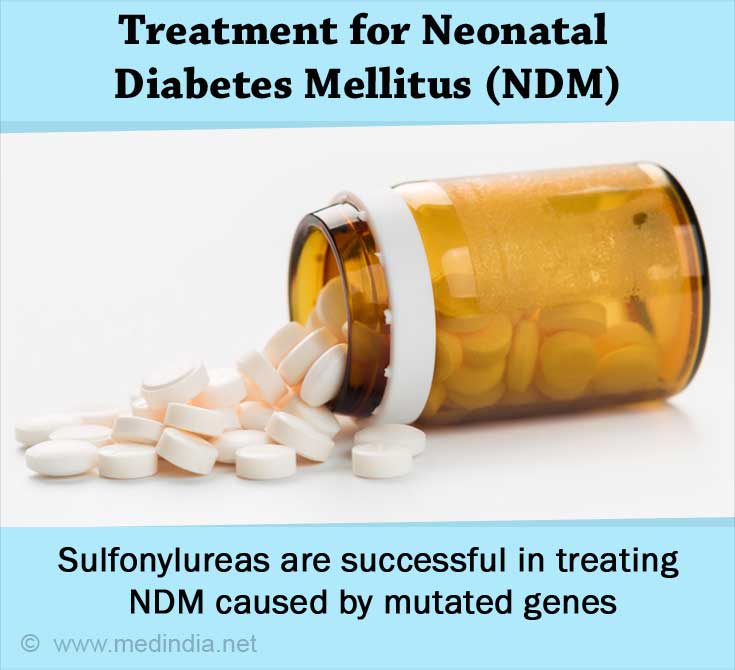 What is Maturity-Onset Diabetes of the Young (MODY)?

Mutations in nearly 10 genes have been known to cause MODY. MODY affects the ability of the pancreas to produce insulin. This leads to elevated blood glucose levels People with MODY may not present with symptoms and some are diagnosed through routine screening. MODY is often misdiagnosed as Type 1 or Type 2 diabetes.

People who are diagnosed with MODY usually have a family history of this disease. MODY is usually diagnosed before the age of 25.

People with MODY can be treated through oral medications, diet and exercise and may not be required to be on insulin treatment. Some patients with MODY may need treatment for related complications like kidney cysts or ketoacidosis (deficiency of insulin leading to excess acid production in the body affecting the kidneys).

How to Diagnose Monogenic Diabetes?

Diagnostic tests for diabetes include:

The risk factors usually found in Type 1 or Type 2 diabetes like obesity or high-blood pressure may not apply to people with monogenic diabetes.

What are the Complications of Neonatal Diabetes Mellitus (NDM)?

Most complications occur due to poorly managed blood glucose levels which damages tissues and organs.

Some of the complications include: 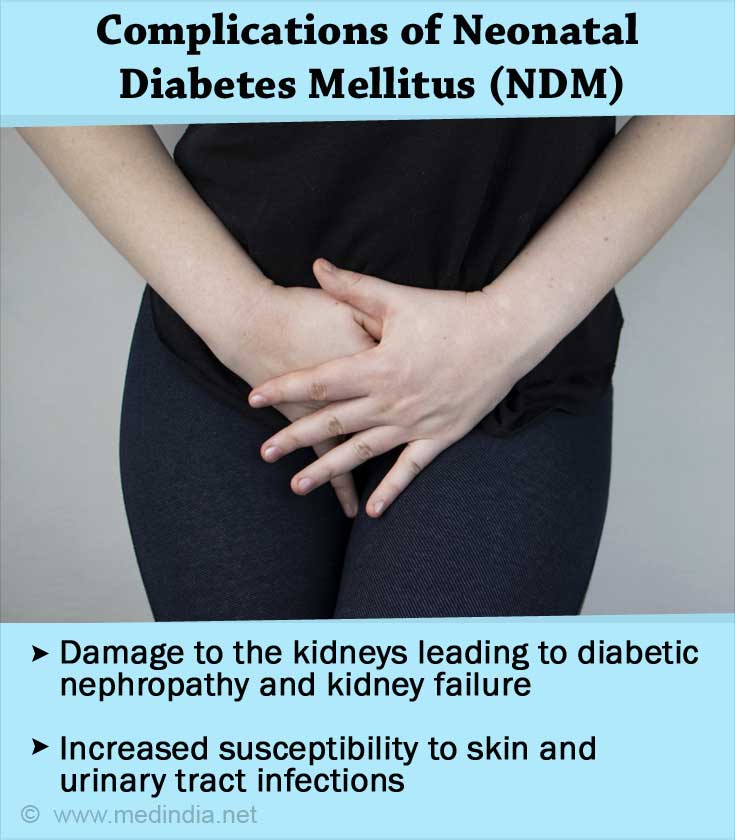 The DNA is analysed for mutations in the genes causing monogenic forms of diabetes. Results usually indicate if an individual already has the mutation or is likely to develop a monogenic form of diabetes in future. Genetic testing is essential towards putting together the right treatment program.

Prenatal testing is useful to diagnose unborn babies. Most forms of monogenic diabetes are autosomal dominant which means a single parent can pass on the mutation to children. If the mutation is recessive, the offspring will inherit two recessive genes from both parents and present with a monogenic form of diabetes.

Genetic counselling is essential both for affected individuals and parents who plan to conceive (one or both have the recessive gene).

Latest Publications and Research on Monogenic Forms of Diabetes

Neonatal Diabetes Often Confused With Type 1 Diabetes
Neonatal diabetes affecting babies less than six months of age are started on insulin as it is often confused with Type 1 diabetes.