Microscopic Polyangiitis (MPA) is a vasculitis affecting small blood vessels. Patient is treated with cyclophosphamide and a corticosteroid.

(MPA) is a type of vasculitis that affects small blood vessels like capillaries, venules or arterioles. Vasculitis is a condition in which blood vessels are inflamed. They are autoimmune disorders, where the body produces antibodies against its own self. MPA usually affects adults in their 50s. Males suffer from this condition slightly more often than females. The reason why MPA affects some people is not known. It often targets the lungs and kidneys. Nerves, digestive tract and skin may also be involved.

The patient may show general signs and symptoms like fever, muscle pain and weight loss. He may suffer from complications like kidney failure, bleeding in the lungs or perforation in the digestive system. Blood tests, imaging studies like x-ray and CT scan and biopsy of the affected organ are used to diagnose the condition. The blood level of a specific antibody called ANCA is high in patients with MPA. The patient is treated with drugs that suppress immunity like cyclophosphamide and corticosteroids. 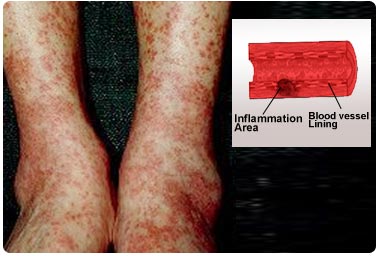 Do you wish to consult a Rheumatologist for your problem? Ask your question

I would like to connect with others that have this disease. What treatments have you tried, what has helped, what type of specialist do you see, etc. I have had this disease for a very long time but it has only been recently that a biopsy of my kidney was done and this disease diagnosed. I currently see a nephrologist, am on cellcept...had 4 infusions of rituxan. What symptoms do you have? Rosemary85

My husband was diagnosed [after several hospitalizations with undiagnosed symptoms..high potassium, etc.] in May 2011. His kidneys have not responded to treatments. He is on dialysis. No doctors in our area are skilled in treatment. He developed infections requiring hospitalization when trying cytoxin. He is trying to be approved for rituxan. Did it help? He is fatigued, and he is in pain in his back and legs.

The rituxan I had in August is helping in reducing some of the inflammation....you can see improvement over the course of a year after the treatment. I take cellcept, did the 4 treatments [infusions] of rituxan and on prednisone. I live in N. Idaho...where are you from?

my husband has this disease, he has been on cytoxin, white blood cell count bottomed out twice. We are trying to get approved for rituxan, could you tell me about your experience with rituxan? Thank you sandy

I was diagnosed with MPA in 2007. I was given cyclosphomide, prednisone and other toxic medicine that threw the illness into remission. Eventually the toxic drugs were replaced with milder ones and in the Spring of 2010 I was gradually taken off the drugs. I take raprinil, not so much for blood pressure control, but more to protect my kidneys that took a hit back in 2007 before I was diagnosed. Prior to the attack I had survived two battles with breast cancer, but the pain of MPA made the cancer seem like a walk in the park. They say that I am still in remission, and for a while I forgot and worked in the garden breaking concrete, planting trees, moving furniture around and this after working full-time 5 days a week. Then recently, I noticed the rash on my ankles, inflamed sinuses, fatigue going up the stairs, dropping things, losing my balance. It happens when I get tired and then I remember, MPA is still in the background.

UV Rays from Sunlight can Cause Autoimmune Diseases in Women
A new research has cited that ultraviolet (UV) radiation from sunlight can instigate certain autoimmune diseases, particularly in women.

Study Highlights Why Autoimmune Diseases Go into Remission During Pregnancy
A study has revealed that a biological mechanism that affects the immune system is what makes many women experience remission of autoimmune diseases like multiple sclerosis during pregnancy.

Polyarteritis nodosa
A progressive disease of connective tissue that is characterized by nodules along arteries; nodules may block the artery and result in inadequate circulation to the particular area

Immune System
Immune system is the first line of defense against Viruses, bacteria, fungi, worms and other parasites, which enter the body through the skin, nose, mouth or other openings of the body, cause infectious diseases

Autoimmune Disorders
Autoimmune disorders occur when the immune system fails to recognize the body as 'self' and attacks it.