Melanoma is cancer that arises in the melanocyte cells of the skin. Dr. Robert Carswell coined the term melanoma (melas  dark; oma- tumor) in 1938. Melanocytes are pigment-containing cells that give brown or tan color to the skin(1✔ ✔Trusted Source
Sir Robert Carswell (1793-1857): coining the term "melanoma"

Melanoma is caused by DNA mutations. Long-term sun exposure or usage of tanning beds can cause melanoma. The ultraviolet (UV) rays damage the DNA of the skin over time and may thereby alter the normal functioning of the melanocytes. Cancerous moles are most frequently caused by prolonged exposure to UV light, especially UVA and UVB(3✔ ✔Trusted Source
UV Radiation and the Skin

Melanoma, or cancerous mole, develops as a result of DNA damage in skin cells. Melanoma is most often observed in adults. Melanoma in children is caused by either congenital moles that have become malignant or due to an inherited skin disorder (xeroderma pigmentosum)(4✔ ✔Trusted Source
Imaging of pediatric cutaneous melanoma

Melanoma appears as an abnormal mole on certain regions of the body, such as the back, chest, legs, face, neck, or arms. Sometimes, an existing mole undergoes changes indicating a cancerous growth. The moles may either be brown, black, or with no dark color, such as tan, pink, or white. Cancer spreads to different parts of the body(5✔ ✔Trusted Source
Common Moles, Dysplastic Nevi, and Risk of Melanoma

What are the Types of Melanoma?

Depending on the site of occurrence, there are 3 types of melanoma:

- Melanoma that occurs in the melanocytes of the eyes is called ocular melanoma. It can be further subdivided into conjunctival melanoma, choroidal melanoma, iris melanoma, and uveal melanoma(6✔ ✔Trusted Source
Ocular Melanoma

 Melanoma that occurs in the skin is subdivided into 4 types:

 This type of tumor is difficult to detect and is found in the mucosal areas of the neck and head (scalp), the lower digestive and urinary tracts, and the vagina in females. They account for only 1% of all the cases of melanoma and patients with this type of cancer do not have a good survival rate(13✔ ✔Trusted Source
Mucosal Melanoma

- Oral melanomas show an aggressive nature and worse prognosis than cutaneous melanoma. Oral melanoma is a very rare and aggressive carcinoma that accounts for 0.2% to 8% of all melanomas and 1% to 2% of all oral malignancies(14✔ ✔Trusted Source
Oral Melanoma

- Penile melanoma accounts for 1.4% of all penile cancers and less than 0.1% of melanoma cases. Penile melanoma results from a malignant transformation of melanocytes in the neuroectodermal layer. Depending on their location on the penis, melanocytes can be considered cutaneous or mucosal(15✔ ✔Trusted Source
Penile melanoma: a 20-Year analysis of six patients at the National Cancer Institute of Peru, Lima

A type of primary melanoma that develops from atypical melanocytes in the skin. Melanocytic nevi, both acquired and congenital, and dysplastic nevi are examples of precursor lesions. There are several histologic variations of melanoma, such as superficial spreading melanoma, acral lentiginous melanoma, nodular melanoma, and lentigo maligna melanoma.

What are the Stages of Melanoma?

Once the index lesion has been histologically confirmed as melanoma, additional characteristics that contribute to the T (tumor) stage include overall tumor thickness, the presence of ulceration, and the presence of mitosis in lesions <1 mm in thickness (T1).

N (nodal) stage is determined by the number of involved lymph nodes. As previously discussed, nodal status should be initially assessed at the time of preoperative clinical examination. If palpable lymphadenopathy is encountered, nodal status should be confirmed via ultrasound-guided fine needle aspiration. If no clinical evidence of nodal involvement is present preoperatively, a sentinel lymph node biopsy (SLB) should be performed at the time of surgery for all lesions >1 mm in thickness. In addition, SLB should be considered for lesions between 0.76 and 1.0 mm thickness when high-risk features are present (lymphovascular invasion, high mitotic count, ulceration, etc.). Current guidelines do not recommend SLB for lesions ≤0.75 mm thick.

M (metastatic) stage is assigned based on the presence or absence of metastatic disease and, if present, is further classified by the location (skin, lymph nodes, viscera, lungs, or increased serum lactate dehydrogenase).

Unlike other solid malignancies, the use of cross-sectional imaging and serum laboratory analysis to facilitate initial clinical staging is not routinely recommended outside of Stage IV disease. However, computed tomography (CT) (with or without positron emission tomography [PET]) and magnetic resonance imaging (MRI) should be considered for all patients with specific symptoms, Stage III disease, or even Stage II melanoma with high-risk features. In the setting of Stage IV melanoma, CT imaging of the chest, abdomen, and pelvis should be obtained, and a brain MRI can be considered(16✔ ✔Trusted Source
Chapter 6Clinical Presentation and Staging of Melanoma

Melanoma can spread to sections of your body far from where it began. Melanoma in this stage is known as progressed, metastatic, or stage IV. It has the ability to spread to your lungs, liver, brain, bones, digestive system, and lymph nodes. The majority of patients discover their skin cancer early, before it has progressed.

The vast majority of patients with newly diagnosed melanoma are "early-stage" - ie, clinically localized to the primary cutaneous site. For such patients, surgery represents the mainstay of treatment; current standards of surgical management have evolved based on evidence obtained from randomized trials, large multi-center and single institutional databases, and consensus panels. Treatment strategies include wide excision of the primary site with margins dictated by important biological features such as Breslow tumor thickness, and sentinel node biopsy to surgically evaluate the regional nodal basins at risk(17✔ ✔Trusted Source
Evidence-based treatment of early-stage melanoma

What are the Risk Factors for Melanoma?

Some of the risk factors for melanoma are: 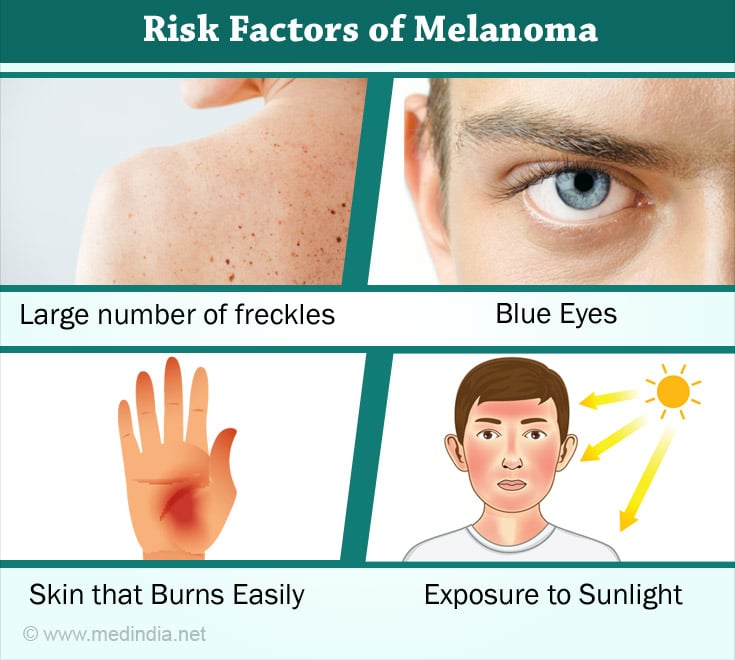 What are the Symptoms & Signs of Melanoma?

The symptoms of melanoma vary between individuals. A new mole or a noticeable change in an old mole should be considered a warning sign to undergo further testing. The most common sign of skin melanoma is a cancerous mole.

The ABCDEF acronym is used to clinically identify melanoma.

A  Asymmetry of a mole

B  Irregularity of the borders of the mole

C  Color difference in the mole: Moles that change in color, become darker, or show multiple colors should be suspected for the presence of melanoma

D  Diameter of the mole. Melanoma usually occurs in moles with a diameter of more than 6 mm

E  Evolving mole. A cancerous mole will show changes in height and width

How do you Diagnose Melanoma?

For the initial diagnosis, a suspicious mole is examined with an instrument called the dermatoscope which is like a magnifying glass. Malignant melanoma is assessed by a biopsy. The entire lesion mole should ideally be removed with an adequate margin during the biopsy.

Additionally, liver function tests and a chest x-ray are obtained to detect any spread of melanoma(20✔ ✔Trusted Source
Current state of melanoma diagnosis and treatment

How do you Treat Melanoma?

There are different ways to treat melanoma based on the stage of the disease.

Lymph node removal: Lymph nodes surrounding the lesions are removed in patients below the age of 60 when the thickness of the tumor is in the range of 1 mm to 4 mm(22✔ ✔Trusted Source
Lymph node dissection in patients with malignant melanoma is associated with high risk of morbidity

Sentinel lymph node biopsy is used to determine the degree of spread of cancer to lymph nodes and the chances of survival of the patient. The sentinel lymph node is the first draining lymph node of the region and is identified using a radioactive tracer or a dye(23✔ ✔Trusted Source
Sentinel Lymph Node Biopsy in Cutaneous Melanoma: Standard and New Technical Procedures and Clinical Advances. A Systematic Review of the Literature

Vaccines: Patients may be treated with vaccines to stimulate the immune system. Immunotherapy with medications like pembrolizumab, nivolumab, and ipilimumab is also useful in treating melanomas. High-dose interferon a2b has been used as adjuvant therapy for people at a high risk of relapse for cancer following the surgical removal of the melanoma, but does not appear to improve overall survival(24✔ ✔Trusted Source
Melanoma vaccines

Chemotherapy: Drugs such as temozolomide, dacarbazine, a combination of dacarbazine, cisplatin, carmustine, and tamoxifen (DBCT), or cisplatin, vinblastine, and dacarbazine (CVD), are also used to treat melanoma. Chemotherapy is also sometimes combined with immunotherapy like interleukin 2 (IL-2) and interferon a2b (IFNa2b) in the treatment of melanoma(26✔ ✔Trusted Source
Chemotherapy for Melanoma

How do you Prevent Melanoma?

Melanoma may be prevented if appropriate measures are taken. A prior history of melanoma places the individual at a greater risk.

Poor prognostic factors include the following:

Prognosis depends on the disease stage at diagnosis, as follows:

Latest Publications and Research on Melanoma

Lifetime Risk Calculator for Cancers
What are your chances for developing some common cancers in your lifetime - find out now.

Non-Melanoma Skin Cancer Patients More Likely to Get Sunburned
The use of skin-protective practices was linked to lower odds of sunburn. It also offers a highly beneficial approach to those with previous non-melanoma skin cancer.

Melanoma Spread can be Bloked: Israeli Scientists
Melanoma, the most aggressive of all skin cancers, was able to send out tiny vesicles - small cysts - containing the disease to other parts of the body.